There is a perversity in going after shorebirds at the peak of spring migration, that point in time when virtually any American songbird imaginable might turn up in a treetop near you, in full breeding regalia no less. But when an elusive species like Gull-billed Tern elects to abide in one spot long enough for a busy bird watcher to get around to stalking it, and said species is joined by Red Knots in proper plumage, the choice isn’t that difficult to make. Anyway, if one is ambitious enough, one can enjoy birds of both shore and song. Since I was meeting up with Corey, ambition was not an issue. Corey, as we all know, has proven himself pathologically unable to resist any avian entering Empire State airspace.

Ambition was the name of the game this past weekend, at least on the eastern seaboard. Between the World Series of Birding, New York City Birding Challenge, birdathons, big days, big sits, and amateur excursions, chances are excellent that not a single local bird escaped the area unspotted. Every inch of NYC was swarming with birders, so Corey and I staked out more less frantic territory east of the city line. Long Island’s Nassau County has been very good to me so far this year and the Gull-billed Tern provided one last excuse to visit Jones Beach before summer renders the area unbirdable (is that even a word?) Corey and I met at the Coast Guard Station, brushing aside the herd of Brant to get to the sandbar that shelters shorebirds year round. The first to pop up was Semipalmated Plover, followed quickly by brilliant Black-bellied Plovers. Having seen abundant black-bellies throughout the winter, I have to say that the spring plumage creates a whole new, far more attractive bird.

The Gull-billed Tern was embarrassingly easy to spot. Two of these delightful aerialists, easy to identify with their relatively stubby black bills, remained in view for the duration of our visit. Just like that, Corey and I added this species to our respective life lists. And because one good tern deserves another (couldn’t help myself there) we followed an uncommon species with three more regular ones: Common, Forster’s, and Least.

Gull-bills are great and all, but I was also on the hunt for a shorebird that had thus far avoided me. Red Knot, that salmon sensation, doesn’t persist through the warmer months with the regularity of its peers. My intelligence, basically the local sightings list, located knots adjacent to the gull-bills and, lo and behold, there they were. A few knots were interspersed with a mixed flock of plovers, Ruddy Turnstones, Semipalmated and Least Sandpipers, all thronging around an unflappable Herring Gull. These species, along with Willet and American Oystercatcher, made for a very productive morning of shorebirding.

Jones Beach can be magical for neotropical migrants, but the magic seemed to have died down with the odd weather patterns we’ve been experiencing. Instead of the recent abundance of Blue Grosbeaks, we were treated to a single Rose-breasted one, adorned with a cravat of absolutely eye-searing magenta. But the grosbeak, some Chimney Swifts, Tree Swallows, and Ruby-throated Hummingbirds represented all the migrants we could muster. The problem wasn’t just the vagaries of the prevailing winds; ravenous swarms of mosquitoes descended on us every time we so much as approached a tree. Witnesses, were anyone foolish enough to expose themselves to this plague of bloodsuckers, would have observed literal clouds around each of us as we dashed for the safety of sandy terrain. As long as we moved, we had a chance, but the minute we stopped to scope trees or bushes, mosquitoes attacked, seemingly oblivious to the industrial strength repellent I’d so liberally applied. Consequently, we had little more than the usual seaside mimids (Northern Mockingbird, Gray Catbird, and Brown Thrasher) and sparrows (Song, House, and Eastern Towhee) to show for our excruciating efforts. Time to strike out for more accommodating environs!

I should note that our experience at Jones Beach was vastly improved by the presence of some local birders. A young prodigy by the name of Brendan, whose remarkable skills belie his age, made sure we had all the sandpipers sorted out. Another gentleman ensured that my life view of Red Knot wouldn’t be restricted to a strained glimpse through binoculars across a vast expanse of sea and sand. This gracious fellow allowed everyone present satisfying looks through his scope, at least until a clamdigger spooked the flock. Interestingly enough, this wouldn’t be the last time that day that the quality of our birding experience depended on the kindness of strangers… 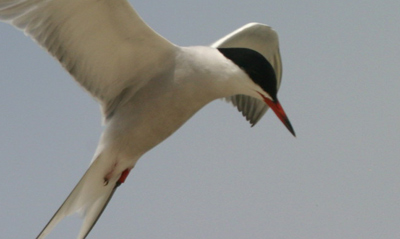