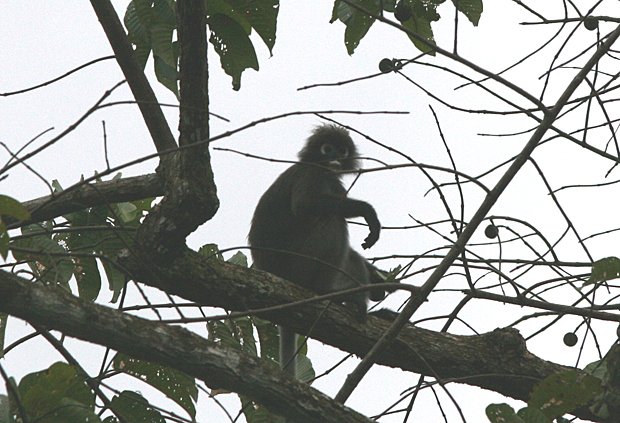 JOHOR, MALAYSIA, DECEMBER 2012 – If you’re traveling to Singapore for birding, you might want to think outside the box or, in this case, the island. Some of the best birding in the area is just 90 minutes or so north in peninsular Malaysia, home of the infamous Panti Forest. Panti – yes, that’s what it’s called, so don’t get yours in a twist – Forest Reserve offers birds you can only find in tropical lowland dipterocarp rainforest, which Singapore no longer has. Sure, the area is being logged heavily, but where else do you have a shot at broadbills, hornbills, and the elusive Malaysian Rail-babbler?

Eager to see all of the aforementioned avifauna, I reached out to the man with the Panti plan. Bird photographer and guide Con Foley may know the birds of this area better than anyone. He has certainly done as much as anyone to educate the world on the beauty and diversity of Panti birds. Good fortune clearly smiled on me when he agreed to take me on a pre-dawn run to the Bunker Trail. We arrived well before sunrise because Con knew a place where a person might encounter Blyth’s Frogmouth. Alas, I only heard this super cool caprimulgid, but did get buzzed by a swift Malaysian Eared Nightjar. So, our first target was only a partial hit. The next one, however, was a total success.

Panti Forest is considered perhaps the most reliable place in the world to see the Malaysian Rail-babbler, an enigmatic skulker found throughout parts of Sundaland. This handsome bird, reminiscent somewhat in manner and form of an antthrush, flashes a bold black, white, and rufous head and emits a haunting whistle from deep in the forest. Few, however, get to lay eyes on it. I am now one of those lucky few, since Con did a masterful job of getting us on the bird in minutes, rather than the hours or days the pursuit sometimes takes. Even better, as I was observing the Rail-babbler in the undergrowth, I spied a male Siberian Blue Robin foraging silently next to it. Wanna try to ID this bird?

Good thing we knocked down our primary quarry, because many of my other desired birds failed to make the scene. December diversity and activity are not nearly as dynamic as during most other months. This meant that we didn’t see a single hornbill or broadbill, both of which were high on my list as exemplars of the Asian tropics I had traveled so far to see. It also means the near-infinite numbers of babblers and bulbuls this site typically delivers narrowed down to a more accessible array of ONLY 7 bulbuls (Yellow-vented, Cream-vented, Red-eyed, Yellow-bellied, Buff-vented, Ashy, and Streaked) and 2 tit-babblers (Pin-striped and Fluffy-backed).

This is not to say we went birdless. Stalwarts like Emerald Dove, Blue-tailed Bee-eater, Dollarbird, Greater Racket-tailed Drongo, Asian Glossy Starling, Asian Brown Flycatcher, Arctic Warbler, and Rufous-tailed Tailorbird turned up with frequency as did some leafbirds (Greater Green and Blue-winged), woodpeckers (Crimson-winged and Checker-throated), and a whole suite of flowerpeckers. These birds are among the most beautiful and enjoyable to observe in the field with their frenetic activity and exquisite coloration. We got good looks at Yellow-breasted, Crimson-breasted, Yellow-vented, and Orange-bellied Flowerpeckers along with more mundane representatives of the sunbird family, Plain Sunbird and Thick-billed Spiderhunter.

As we patiently worked the Bunker Trail, we encountered crackers like Black Magpie, Asian Drongo-Cuckoo, Green Iora, Asian Fairy-bluebird, and Korean or Yellow-rumped Flycatcher. The magpies were probably the rarest of our passerine sightings, but every one of these birds was new and exciting to me. Just as exciting was my first Old World barbet, even though it was a drab Brown Barbet. I’ll have to come back for the fancier ones. Panti Forest was much better than I expected for raptors. Our first sighting of the day was a formation of beautiful Black Baza soaring overhead. We saw a number of these distinctive raptors, along with Crested Serpent Eagles and Oriental or Crested Honey Buzzards. While observing the latter, Con maneuvered his cannon of a camera lens to snap a shot. If you can parse the subtle differences in his photo below, you’ll see the bird on the left is a dark morph Oriental Honey Buzzard, but the bird on the right is a pale morph Changeable Hawk-Eagle. Those raptors were pretty awesome, but not as exceptional as the one that Con had staked out down the road. As we left Panti, we stopped at a secret spot where a juvenile Blyth’s Hawk-Eagle called relentlessly in the forest. This was a doubly fortuitous stop because, as we were leaving, I was commenting (complaining) about how I hadn’t seen a malkoha. Malkohas are large Asian tropical cuckoos in the genus Phaenicophaeus. Asia is home to all kinds of cuckoos, but none are as elaborately colorful as malkohas with those gaudy faces and painted bills. Anyway, as I was commenting (complaining), having already stowed my camera in defeat, a stunning Chestnut-breasted Malkoha crossed our path! Unable to memorialize the moment in photos, I drank in the sight of my only malkoha. To get the full visual, go take a look at a lovely female Chestnut-breasted Malkoha. Anyone considering a visit to Panti Forest should be enticed by the five different species that might be seen there.

In review, my trip to Panti Forest was phenomenal. I visited during the quietest week of the year, yet still saw tons of amazing birds, many of which don’t turn up in Singapore. No, I didn’t see any broadbills or hornbills, nor did many of the usual residents turn up with in their typical numbers and diversity. On the other hand, I saw the highly desirable Rail-babbler as well as a malkoha and didn’t get any leeches! Plus, I saw awesome bats, bugs, butterflies, herps, pitcher plants, and four of the five possible monkey species: Dusky Leaf Monkey, Banded Leaf Monkey, Southern Pig-tailed Macaque, and Long-tailed Macaque. All in all, a memorable Malaysian experience. I can’t imagine birding Singapore without making a run to Panti Forest. Bats under a rocky overhang

But the real highlight for me might have been birding with Con Foley. Con is a master at his craft and an uncanny resource on the birds of Singapore, Malaysia, and much of Asia. Con combines his passion for birds and photography through custom photo tours. Anyone interested in either would do well to connect with Con before visiting this part of the world! Con wanted to document the only time he’d ever seen a fruiting tree
(not me, but the tree behind me) without birds in it in Panti Forest. And though I didn’t see an elephant, they lurk in Panti… this is an elephant fence protecting a palm plantation