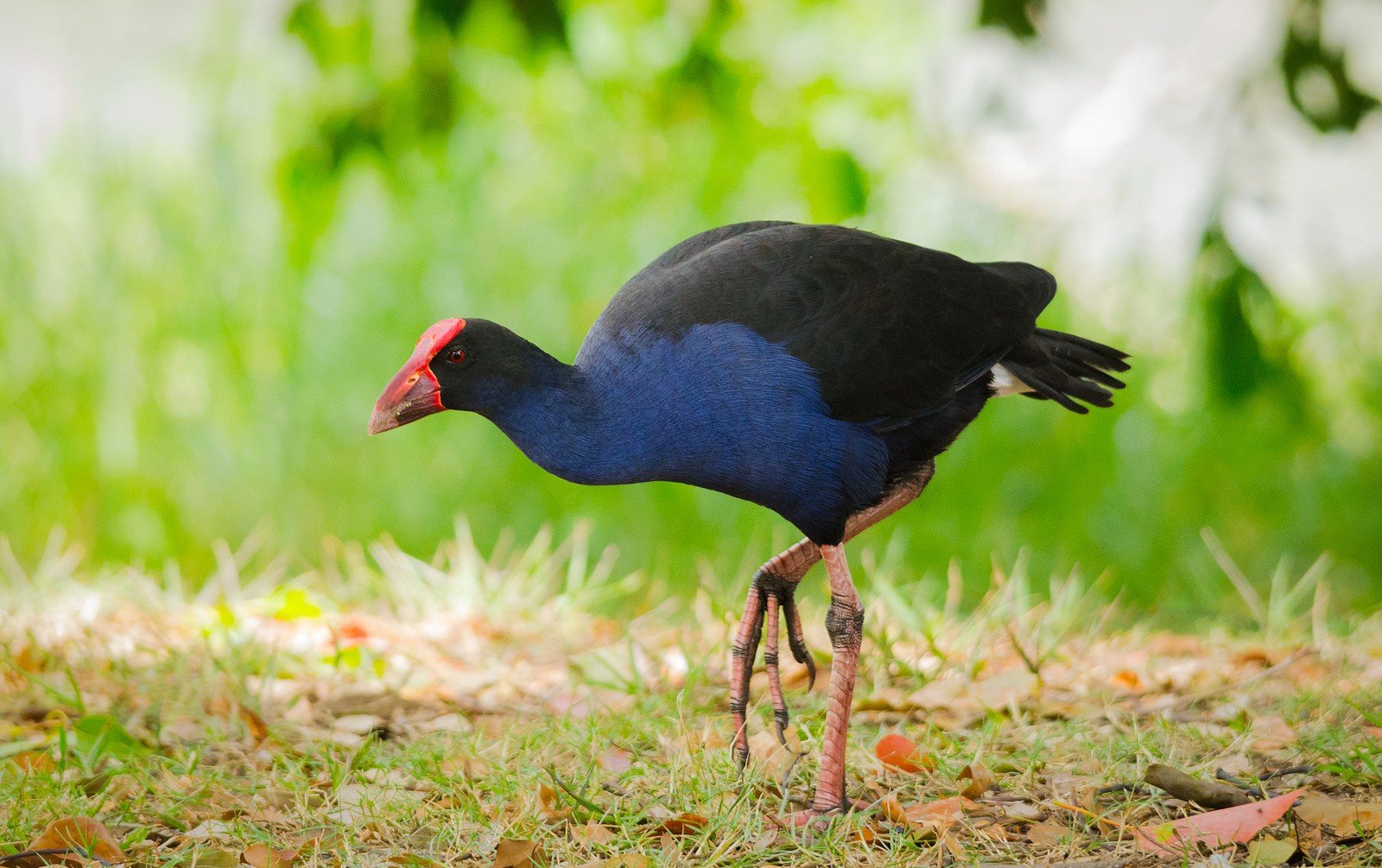 The colorful Purple Swamphen (Porphyrio porphyrio) lives in wetlands from Portugal and Senegal all the way east to New Zealand and the Samoan Islands, and a feral population is now well established in Florida. It varies in appearance across its enormous range, and a new genetic study — Dispersal and speciation in purple swamphens (Rallidae: Porphyrio) — bolsters the case that this “supertramp” is actually a superspecies that could be split into six different species. (Above: Swamphen in Australia by James Niland)

In their new study, Juan Carlos García-Ramírez and Steve Trewick of New Zealand’s Massey University suggest that the genus Porphyrio (from a Greek word for purple) likely originated in Africa and colonized the world from there. The African Allen’s Gallinule (Porphyrio alleni) split off from its relatives first, and then there was a New World colonization event that produced the species pair Purple Gallinule (Porphyrio martinicus) and Azure Gallinule (Porphyrio flavirostris).

Moving on to the heart of the matter, García-Ramírez and Trewick show that “Purple Swamphen” as currently recognized is paraphyletic with respect to the critically endangered (South Island) Takahe (Porphyrio hochstetteri) and the extinct North Island Takahe (Porphyrio mantelli) and Lord Howe (White) Swamphen (Porphyrio albus).

In other words, multiple waves of long-distance dispersal have resulted in the diversity of “Purple Swamphens” and their Pacific Island endemic relatives, with taxa becoming isolated and diversifying in the wake of each successive wave. Geographically adjacent taxa are not each other’s closest relatives. Here’s a quick overview of the six potential “Purple Swamphen” species:

“The oldest split among the currently recognized P. porphyrio lineage occurred in the Late Miocene (~6 mya),” the authors write. This split led to the population that lives around the western Mediterranean in Europe and North Africa and to the one described below. The western Mediterranean birds are bluish-purple all over. When split, they would retain the scientific name Porphyrio porphyrio. The sister taxon to the Mediterranean birds occurs on Borneo and the western Indonesian islands. As indicated by the English moniker “black-backed,” these birds have blackish wings and backs. If split, their scientific name would be P. indicus. The Southeast Asian subspecies viridis is usually treated with indicus (e.g., the eBird/Clements checklist puts them in a group as of version 6.9), but as far as I can tell, the new study didn’t sample viridis specifically. These birds have greenish wing coverts and apparently somewhat variable head color (example of a paler-headed bird). The African Swamphen split off next; it has a green back and a brighter blue face and breast. The Gray-headed Swamphen ranges from Turkey through India to northern Thailand. There are three subspecies in this group: caspius, seistanicus, poliocephalus — García-Ramírez and Trewick sampled the latter two.

The two takahes split off between the African Swamphen and the Gray-headed Swamphen, about 2.5 million years ago, the authors estimate.

The Philippine birds (photo) have chestnut backs and would be called Porphyrio pulverulentus if split. In the new analysis, they formed a clade with the extinct Lord Howe (White) Swamphen — a strange result given that Lord Howe Island is east of Australia. The authors “remain cautious” about this result but suggest that dispersal of this sort is possible. Dark blackish swamphens occur from eastern Indonesia across Australia, Melanesia, southern Micronesia, and Polynesia as far east as American Samoa, having reached some of these islands only in the last few hundred years and, in the case of New Zealand at least, recolonizing islands previously settled by their cousins. There are numerous subspecies in this group; if split, they could be called Australasian Swamphen, Porphyrio melanotus.

To split or not to split

García-Ramírez and Trewick stop short of calling for recognition of six species, noting only that “several
subspecies and subspecies groups may represent species-level lineages.” Their results do show significant genetic structuring among recognized subspecies and subspecies groups (as described above), which indicates reduced gene flow, and they write that “range expansion is probably episodic, and this enhances the opportunity for speciation and establishment of reproductive barriers.”

They also found genetic similarities, however, between specimens from Java and from the Philippines and specimens from New Caledonia and Sulawesi. “Although rare misplaced haplotypes of this sort might be evidence of ongoing exchange among island populations, they could also be the product of incomplete lineage sorting or past migration events,” they say.

It’s unclear which major taxonomic body might act on all this information. The IOC World Bird List already recognizes African Swamphen as a separate species and may proceed to split the rest based on this study. No doubt certain other authorities will want clearer answers to what’s going on with some of these island populations before taking action, but what the new study does make clear is that this is a very successful group of birds with a long and complex history. Multiple dispersal events have founded new populations in some of the remotest corners of the world, populations that have gone on to diversify and find success. Recognizing that in some fashion seems like a reasonable idea to me.

In 2013, the American Birding Association Checklist Committee added Purple Swamphen to the ABA list, following a decision by the Florida Ornithological Society Records Committee to consider the bird established in Florida. If a Purple Swamphen split gained traction, which species would end up on the Florida and ABA lists?

In Bill Pranty’s Birding article on Florida swamphens, he discusses reports that the founding pair of the Florida population may have been a mixed pair but also that unpublished genetic data align closely with Gray-headed Swamphen. He also mentions, however, that the same unpublished study shows female birds in Florida tending to be blue-headed and male birds tending to be gray-headed.

So it sounds like there’s more work to do in Florida. Those birds may eventually be dubbed Gray-headed Swamphen. Or, they may be determined to be of hybrid origin, which would be an challenging taxonomic situation but perhaps perfectly fitting for such a prolific global innovator.

Here’s hoping that this remarkably successful and adaptable group of birds someday gets the greater recognition and understanding it deserves.