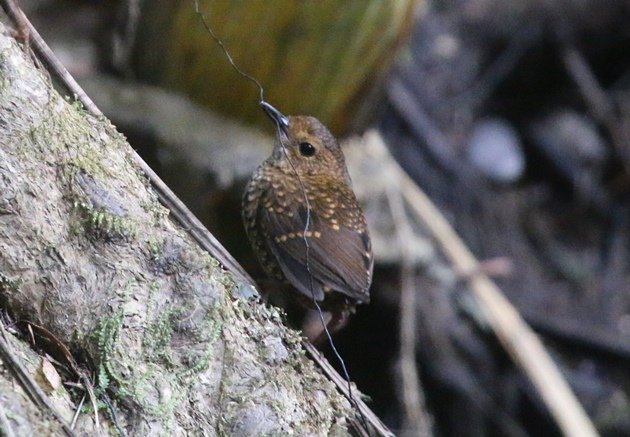 The pygmy wren-babbler is a tiny babbler that looks like a wren, making it a bird well named. This is not an insignificant fact from this blogger’s perspective, considering the awkward common names we often have to cope with in our day-to-day birding lives and the fact that all babblers are essentially brown, offering few options to those in charge of naming them. Seriously, it is much nicer to blog about a brown bird with a descriptive name than some other bird whose common name references an ancient ornithologist none of us have ever met. Admittedly, I might be tempted to compare Temminck’s, Buettikofer’s, Horsfield’s, Abbott’s, or Vanderbilt’s Babblers to Audubon’s, Townsend’s, Kirtland’s and MacGillivray’s Warblers by pointing out that dull scientists went to Asia while more colourful personalities went West. However, that would be unfair since Asian scientists had to cope with tropical heat, leeches, kraits, and thick jungle while North American researchers just had to get over more or less severe cases of warbler neck, so I guess I’ll leave it at that and quickly return to the Pygmy Wren-babbler.

The range of the Pygmy Wren-babbler is rather peculiar as it isn’t pygmy at all, reaching from the foothills of the Himalayas through the southern half of China to the northern half of Myanmar and Vietnam. This more or less coherent range is occupied by the nominate subspecies pusilla. Then, however, it becomes interesting. South of this range are several isolated populations, in South Vietnam, the Malay peninsular, Sumatra, Java, Flores, and Timor, an all of them have been assigned subspecies status. Having recent taxonomic changes in the Oriental region – a region clearly “over-lumped” – in mind, or just listening to the varied songs of these populations (“varied” for those with an appreciation of simple songs) on xeno-canto, my guess is that it is just a matter of a scientist’s time and research funds until most or even all of these subspecies will be elevated to species level. This post is about the subspecies rufa from Java, because that’s the only subspecies I’ve seen so far.

If you are a birder visiting Java, and you should be, encountering the Pygmy Wren-babbler is an easy feat since it is dependably found within the national park Gunung Gede Pangrango, and if you are a birder visiting Java and you do not visit Gunung Gede Pangrango, you can’t be a birder after all. However, keep in mind that the bird has a descriptive name comprising “pygmy” and “wren”. How pygmy is it? Very, at 7.5 to 9 cm (around 3 inches). How troglodytic is it? Very, since its plumage has the pattern of bark and the bird dwells on the ground. These two factors, combined with the circumstance that I am bound to visiting the park on overcrowded weekends during business trips to Java, meant that I had to console myself with “heard-only” for my first two visits. On my third visit however, I was far more fortunate as the species was surpisingly active, with the birds’ movements frequently giving them away next to the trails. If the bird don’t move, the birder don’t see. I will freely admit that decades of looking at Acrocephalus warblers have certainly taken their toll, but I do find the delicate brown patterns of the Pygmy Wren-babbler rather attractive. Beats a male Magnolia Warbler any day. Well, most days. Some days? Finally seeing them, I was struck by how much their plumage resembles juvenile birds due to their buffy feather tips and short wings. I was struck even more by how visually absent their tail was. I guess the brighter bird – below – is the male, but I am not sure The summit of Gunung Pangrango is a worthy background for a Pygmy Wren-babbler observation. It would also be a suitable background for recording Asia’s first-ever Magnolia Warbler. Well, I might be there again in a few weeks and promise to do my best.