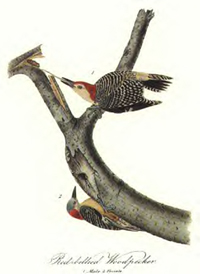 While driving today, I found myself amidst a playful flock of Dark-eyed Junco. I also spotted a European Starling with an amazing throat pouch singing atop a telephone pole, which really took me by surprise. Since when do starlings have throat pouches? But the bird of the day for me is the Red-bellied Woodpecker. I saw two of these beautiful birds during my morning commute, one in New York and the other in New Jersey. I don’t know if I have the cold weather to thank, or the denuded branches or my expanded perception, but three red-bellies in two days is providence indeed.

The Red-bellied Woodpecker is most recognizable not by its belly, but by its bright scarlet head. The male has a helmet of red from his nape to his lores. The female also has red on her head, mostly on her nape. This red is the brilliant, screaming hue that seems to grace most woodpeckers. But don’t confuse this bird with the Red-headed Woodpecker, whose head is entirely red. The red-belly is named for its vaguely pinkish abdominal wash, viewable only in the right conditions and hardly ever in the field.

Even though the red-belly’s defining mark is tough to spot, this bird is easy to identify. Pileated Woodpecker has a prominent red crest. Hairy and Downy Woodpeckers look like each other, but not like the red-belly. The Red-cockaded Woodpecker has white cheeks and a black cap and nape. The only bird that resembles the red-belly is the Golden-fronted Woodpecker. However, this bird has a golden yellow nape and lores. Anyway, they barely overlap, so unless you’re in west Texas, don’t worry about it.

Red-bellied woodpeckers primarily feed in deciduous trees. However, they sometimes forage on the ground and will even frequent bird feeders. If you would like to entice these lovely birds to feed in your backyard, try peanuts.