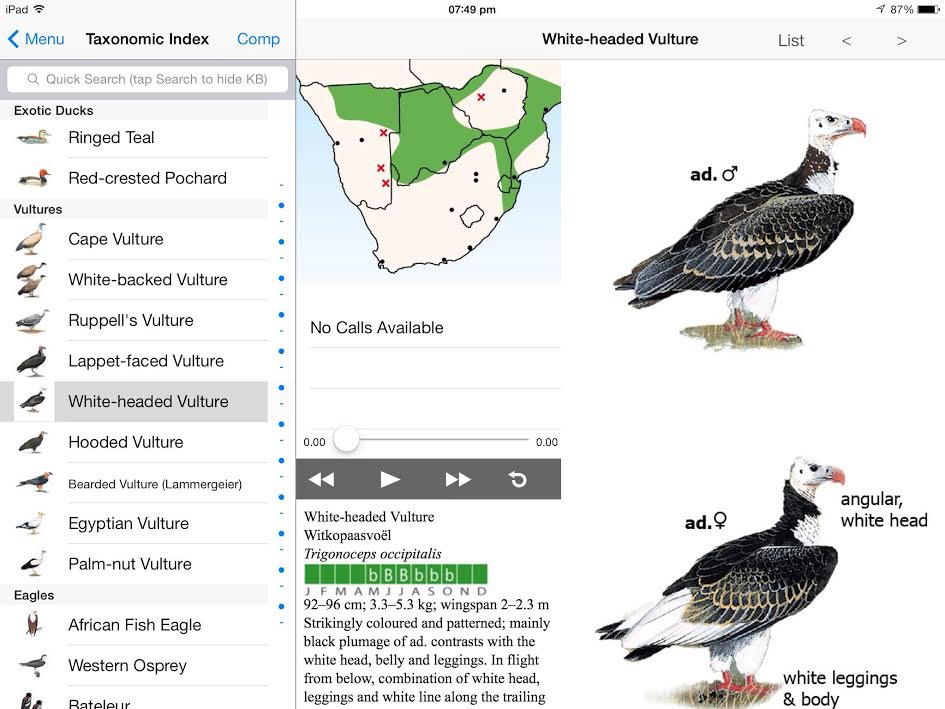 In the light of the (worrying) news that Corey is writing a field guide (yes, I’m up to date now), it struck me as a good time to have a look at the technology that will quickly render his effort, and all other dead tree books, obsolete. It can’t have escaped your knowledge that knowledge powered by electricity is all the rage now, being as you’re currently reading a website that once upon a time would have been a magazine (and provided us with actual jobs). And over the last few years actual paper books have been making the leap onto devices, and, specifically for this review, tablets and smartphones, in a manner that reminds one of rats on a proverbial sinking ship.

The question is, can a bird guide actually make the jump and still work in a field situation? I have to admit, I didn’t think it could when I left for Africa last year. I had a copy of Sasol’s eBirds of Southern Africa on my iPhone (and iPad), but I had bought it to brush up on my African birds in my spare time, like on bus trips or particularly long meetings. I had planned to buy a new copy of the Sasol Birds of Southern Africa when I arrived in Cape Town, to replace my 13 year old copy (which I brought as well). Quite a lot had happened in the time between my first visit to the region and my last trip. Whoever is in charge of names in the area had abandoned an unwise relationship with compound names ((meaning Redwinged Starlings were Red-winged Starlings again) and seemed to have shifted the names of lots of species around in the hopes of aligning them with the IOC (goodbye louries). There had also been a number of splits. When I got to South Africa though I was struck with some indecision. Do I go with the newest shiniest Sasol, or do I pick up one of the rivals? How many copies of Sasol does one human need? Unable to commit, I decided to wait a while and make do with the eguide and old book until I made a decision. But then as we were not doing much birding I could get by with the eguide for a few trips. And then I almost didn’t pick up the book again for the rest of the trip.

I haven’t used any other eguides other than Sasol one (and a fairly basic Singapore one), but if they are all this good the days of paper guides in the field could well be numbered. But I say that with some fairly strong provisos. The guide is, at its most basic, a list of birds, with pictures, in taxonomic or common name order. In order to use it well you need to be able quickly navigate to the section of interest, ignoring the 800 or so other birds that aren’t what you are after. Scrolling blindly without much idea would be a lot harder than flipping through a book (a problem I have with all ebooks). on a couple of occasions I did end up with something I had no idea about and I was lost, like the first time I saw a Lesser Honeyguide but couldn’t find it anywhere in the passerines.  But if you have taken the time to familiarize yourself with the order of birds, and the types of birds you could be seeing, then mostly it can be very quick to get to where you want to be. You can ever touch the scale on the right hand side roughly where you think it will be (albatross and penguins at the top, woodpeckers and larks in the middle, weavers and estrilid finches at the bottom) then scroll quickly to where you want to be. Alternatively, you can type a generic or specific name in the search field at the top, and the 800 long list quickly drops down to a manageable size.  See a new woodpecker you can’t identify? Type woodpecker and that’s all you’ll see as options. The guide also does things a book can’t. Most birds have a call recorded along with the entry, an astonishingly useful feature in an area of the world with so many drab and similar looking LBJs. You can use this in a number of ways. In one instance I saw a silent but active warbler thingie bouncing around in the reeds. It was moving to quickly to get my bins on it, so I found a likely looking species and played a few seconds of call. It reacted briefly by coming to me, confirming it was an African Reed Warbler, and I stopped playing straight away to avoid disturbing it. If you object to even that small amount of disruption, it can still be an immensely useful to have the ability to play a call to yourself quietly when listening to a bird to see if it matches. A quick listen to the call recorded while listening to a bird in the wild helped me identify a Little Rush Warbler and separate a Livingstone’s Turaco from the much commoner Purple-crested Turaco. It’s not perfect, because calls can vary geographically. A bird drove me nuts in Tembe Elephant Park, as I couldn’t find it on the app. It turned out it was a Sombre Greenbul, the recorded call of which is subtly different from what I was hearing there. Another unique selling point is the My Location feature. Using GPS, local phone towers or just you throwing a pin in a map, you can select the location you are in and it will cut the list you navigate down to just the species that are typically there. Picking your way through 20 or so weavers can be daunting, but it is less so when you throw out all the species only found in other parts of the region. While I found the feature useful, it paid to treat it with a certain amount of caution. Quite apart from eliminating vagrants (or possible ones), I found it worked better in some locations that others. In particular the GPS function didn’t seem to work in Botswana and Zimbabwe (I am, I have to confess, guessing there was a GPS function as it seemed to work in South Africa in areas with no signal. I may be mistaken). And in a few places it either left off species that were there or listed ones that wouldn’t be. The most outrageous of these was in Victoria Falls, where the smart list had the Livingstone’s Turaco (actually found on the other side of Zimbabwe on the border with Mozambique) but didn’t have Schalow’s Turaco, which does occur there. Overall, I found the function worked best in South Africa compared to other countries. But it’s an improvable feature that will get better as it is refined, and it certainly shows the direction guides could go in the future. There were niggles that I did find when using the eguide, though. The search function is a little too precise. If you see a species in the genus Accipiter and you type “sparrowhawk” you’ll miss the goshawks and visa versa, and if you just type hawk you’ll still miss the Shikra. Hell, If you type Accipiter you’ll miss the Gabar Goshawk and Lizard Buzzard. Less forgivable is that if you’ve done just that, realized it is like a sparrowhawk but doesn’t have that word in the name but you’re in the right region, clearing the search function dumps you back at the top with the penguins instead of leaving you down with the hawks you are looking for.

Other problems can be put down to a pre-existing problems in the Sasol guide. Say you’re trying trying to separate the Purple-banded Sunbird and the Neergaard’s Sunbird. Hey, that bird has to be a Neergaard’s, it has a bright blue rump, unlike the other species in the area. Actually, the Purple-banded does too, but you wouldn’t know that from the picture. And, oddly, a female Violet-backed Starling is shown in the list, rather than the much more obvious male, which threw me when I first was trying to ID it (the only time I consulted the book). Compare this to the Red-winged Starling, which has very different sexes and both are shown on the list. And, generally, I found it almost useless for identifying cryptic species like cisticolas where you are trying to pick from several similar species. With one exception the cisticolas I recorded were picked out by call or a human guide.

Fixable problems aside, in general I found the Sasol eBirds of Southern Africa an easy to use field guide, to the point where I didn’t use paper based guides at all, in the field. Carrying a phone is much easier than a field guide, and it isn’t like the Sasol is the size of some of the other guide books I have lugged around in the past (Howell and Webb’s Birds of Mexico could be used to stun a taipir).  There are two other ebird guides for the region, and while I haven’t used either of them from what little I have seen the Robert’s eguide is a lot better than its paper equivalent. I’m a huge bibiophile, and as much as I have embraced ebooks I still love the feel of a real book. That said, I can see eguides becoming very popular in the future if they are all as good as this one. Between your phone and a small pair of bins stuffed into your pocket of purse, you can be ready to bird at any time, and that’s hardly a bad thing now is it?

Where Are You Birding This Final Weekend of May 2011? 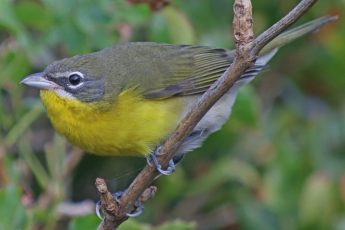