Who doesn’t love a long weekend? Amidst the pleasures of entertaining friends and family and my fruitless attempts to catch up on some sleep, I managed to carve out an hour or so for birding. Astonishing reports of Horned Lark and Lapland Longspur drew me to Van Cortlandt Park, a Bronx public space not known for arctic rarities. These special species, as I suspected, failed to materialize. Yet, Van Cortlandt is not without its charms, especially this time of year. Pigeons, doves, starlings, and crows stick mostly to the streets, allowing all kinds of birds to thrive within the park’s 1,146 acres of prime northwest Bronx real estate.

Most of the birds that seem to do well here as autumn fades to winter are black birds. Large flocks of Red-winged Blackbird and every greater groupings of Common Grackle pass overhead often, at least when they’re not raising a ruckus from the treetops. Red-wings in winter are interesting, but even more exciting is another icterid that has claimed this ecosystem for its own. I don’t know much about NYC birding, but I do know this: if you are looking to add Rusty Blackbird to your life list, visit Van Cortlandt Park. If you absolutely have to see one, show up when the weather turns cold. A large, stable population of Rusty Blackbirds winter here, and like any other blackbird I’ve ever met, they’re not at all shy. 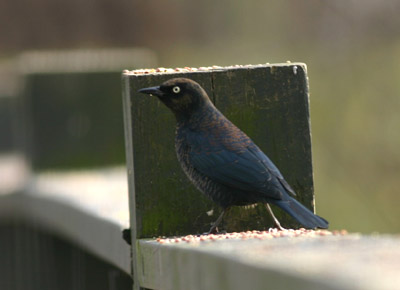 The bird above was, with its compatriots, the highlight of my trip to Van Cortlandt, but far from the only birds I saw. Black-capped Chickadee and their less common companion, Tufted Titmouse could be found everywhere. Downy, Hairy, and Red-bellied Woodpecker were abundant as well. The variety of species in the woods, which included White-breasted Nuthatch, Gray Catbird, Cedar Waxwing, Northern Mockingbird, Blue Jay, Northern Cardinal, and, of course, House, White-throated, and Song sparrows surprised me. The array of waterfowl and water-loving birds also offered some unexpected treats. The ponds and marshes offered the expected flocks of Mallard, Mute Swan, Canada Goose, and Ring-billed Gull, but a number of Great Blue Heron and Hooded Merganser turned up as well. The mallards were far and away the most common ducks, but a pair of neat Gadwall and a single Northern Shoveler drake (I forgot how beautiful this bird can be!) claimed some space of their own. Lone Belted Kingfisher and Double-crested Cormorant assured me that these species hadn’t entirely abandoned the Bronx for the year yet.

All in all, this was a good hour of birding. However, I’m still waiting for those Horned Larks!