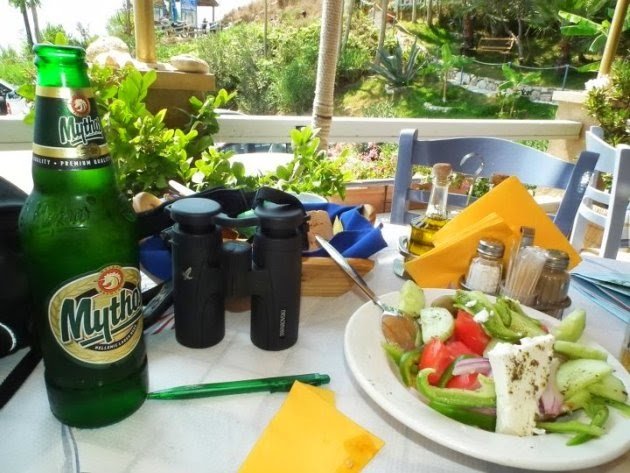 I don’t like to wake up if it’s still dark outside – I hate it! And here I am on vacation in Greece, turning off the alarm at 5.30 am – too early, as it will turn out, but I had no clue when the sun rises.

At the crack of dawn, I am driving along sharp curves through the olive groves. I define the “crack of dawn” as that time when it’s already (almost) light, although the sun is nowhere to be seen. For some unexplainable reason, birds seem to particularly love that time.

My eyes gliding over the dry grass underneath the olives – the day before yesterday I saw two Rock Partridges there, lifers for me. In my native Serbia, these birds are so ill numbered that they were even deleted from the huntable species list with an explanation: “there is no surviving population of huntable size”. No partridges for me under these olives, either. Smarter than I am, they are still asleep in some thick bush.

Yet, the consolation prize for me comes in the shape of a Brown Hare in the middle of the dirt road. A bit further and a few hundred meters higher (I am probably already at about 1000 m a.s.l.), I am driving through mostly bare, rocky ground, kept that way by herds of domestic goats, which also cross the road as they like. Already having had way too close encounters with domestic animals, that habit is something I particularly dislike – especially before the first morning coffee!

The most noticeable birds of the island of Kefallonia (or Cephalonia) are often flying across the road in front of me: Eurasian Jays. Quite tame, they would come as close as only a meter or two. Being darker and of colder colouration, they visibly differ from the more northerly Balkan populations. They belong to a different subspecies – out of 33 recognised races, only 9 are found in Europe. These sunny open grounds are a perfect habitat of wheatears and I soon find both Northern and Black-eared. The European Stonechat and the Corn Bunting are the next two (I am used to these buntings in the arable fields of Serbia, and I find it unusual to associate them with their more Mediterranean habitat types). Yet, the next one comes as a real surprise – Great Tit! I have always associated this bird with much more wooded habitats (okay, there are some low bushes around, even a distant short tree, but barren limestone dominates).

And that bare stony ground is not the natural habitat here, but a consequence of centuries of forest felling and fires – forces which, combined, have reduced the island forest cover to a quarter of its previous size. The range of those surviving endemic Greek Firs (Abies cephalonica) was declared a national park, four decades ago. This fir grows at the highest part of Mount Ainos, whose main peak – where I am heading now – reaches 1628 meters (5341 ft.) a.s.l. It is an incredible feeling to enter the firs coming from hot, rocky areas, almost like the forests of Central Europe and not Mediterranean. A strange fir, it grows only here and in the Peloponnese – because it cannot stand the frost! The air becomes fresh, moist and almost Alpine like and yet, every now and then, the waste expanse of the Ionian Sea is visible from an excellent tarmac road.

The forest is full of Coal Tits. Unlike the open areas, where birds give the impression of being more evenly distributed, forests easily give an impression of being devoid of birds altogether. Use your ears: birds move in parties (or do they make wild parties?) which are constantly communicating with each other in various, often short, signals. Coal Tits move here in about dozen or (likely) more strong groups, chitchatting all the time. Do those voices have some meanings?

Eurasian Jays have found their home in these forests, too, giving the impression of being roughly three times more numerous than in the open – and keep in mind that in the open I have seen most of them, while here I can see only those kind enough to present themselves.

The road is winding through the firs, some dead and dry, some old, tall and thick – all of them covered in various lichen and mosses. Two Mistle Thrushes in front of me… and a foraging party of Coal and Great Tits and Common Chaffinches, with one Common Firecrest and ubiquitous Eurasian Jay. From a dry treetop, one Spotted Flycatcher takes short flights, trying to catch some prey in mid-air and returning to the same spot afterwards. I am nearing the top of the mountain. Avoiding the visual pollution by antennas of the transmitter station, I am continuing along the dirt track to the next, less disturbed peak, looking like a pile of boulders surrounded by beautiful old firs overgrown with lichen beards and with great views of the island’s southern shores and the blueness beyond. Almost like it knew that human imagination inhabits the mountain tops with birds of prey, one juvenile Eurasian Sparrowhawk with finely spotted wings takes flight – right bellow my feet, only to stop and pose at the nearby fir top!

On my way down, I am searching the same olive groves, hoping for the Rock Partridges. At the spot where I’ve already observed them, I stop, rest my elbows on the car roof and scan the area. The sun is scorching the area, and the birds are nowhere to be seen. I lose my nerves, am about to leave, when… the partridges lose their nerves, too, and the entire flock, some dozen birds, takes flight! They rise steeply and noisily, showing their handsome striped flanks, only to land a few meters away and scatter into the bushes.