I can’t speak to other parts of the world but if you live in the northeastern United States, every moment of May birding matters. Lightning can strike at any time. Case in point, I’ve only been able to muster about 30 minutes of bird watching in the last week, yet I still pulled a lifer.

The setting was Rifle Camp Park, a sweet setting in the shadow of the more popular Garrett Mountain Reservation. I’ve only been to Rifle Camp twice and the latter time was a bust. But that first time, when Charlie and I were rained out of Sterling Forest and wound up at Rifle Camp when we thought we were birding Garrett Mountain, was outstanding. Even with limited time, I liked my odds of reliving those thrilling hours of last May.

With the knowledge that any kind of warbler, vireo, or flycatcher might be lurking in the treetops, I tried to ignore the crowds of Common Grackle in favor of those smaller songbirds. One bird I was particularly happy to see was Great-crested Flycatcher. This Myiarchus flycatcher is a beautiful bird, much more so than it’s given credit for, with startling streaks of burnt orange and a soft lemon yellow belly. Best of all, the Great-crested Flycatcher is highly distinctive in its range, a trait sorely lacking in most North American flycatchers. Of vireos, I spotted only Red-eyed. Warblers fell mostly into the common category with Black and White, Yellow-rumped, and Northern Parula making the scene. But the one exception was an exceptional male Bay-breasted Warbler, a sensational species that Corey and I chased pretty hard last weekend to no avail. Since I observed a bay-breast here last year as well, just about to the day, I’m going to go out on a limb and declare Rifle Camp Park an excellent spot to observe Dendroica castanea in mid-May.

Thrushes were out in full force at Rifle Camp. I won’t say that Swainson’s Thrush was quite as plenteous as American Robin, but I’ve never seen more in such a short period. But the bird of the day was another, no less comely Catharus thrush. I’ve pegged this bird, who gave great looks as it hopped blithely in the grass, as a Gray-cheeked Thrush, my first no less. It’s true that Catharus minimus and bicknelli are extremely difficult to discriminate in the field, but the marks looked right, the habitat was more fitting, and spotting a Bicknell’s now would take the air out of my impending Adirondack safari in June. So I’ll take it! 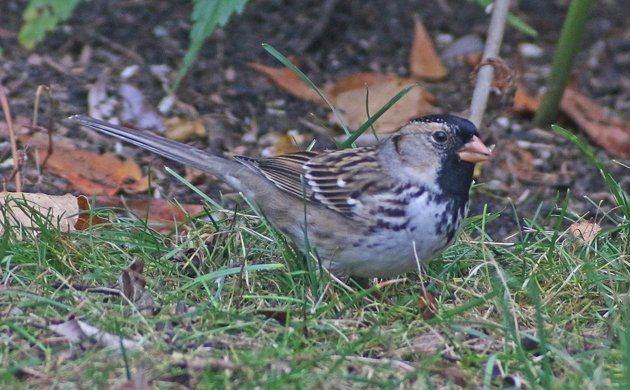