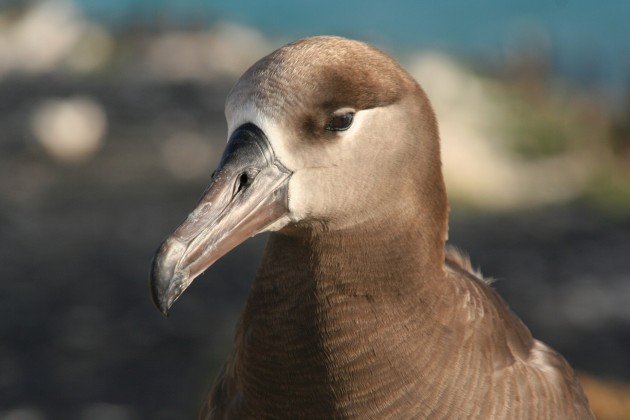 Yes, that’s what’s happening at Midway Atoll, a chain of islands in the Pacific Ocean managed by the U.S. Fish and Wildlife Service (FWS). You’ve no doubt heard about birds being put at risk by nonnative cats, rats, and even goats. But plants?

In the case of Midway, a National Wildlife Refuge, the offending species is Golden Crownbeard (Verbesina enceliolides), an innocuous-looking flower that’s native to Mexico and the Southwestern United States. It was believed to have been introduced to the atoll in the 1930s, and by 1990s posed a serious threat to Midway’s 3 million avian residents and visitors. (They include Black-footed Albatrosses, Laysan Ducks, and roughly 65 percent of the world’s Laysan Albatrosses. Photos of the Black-footed, above, and the Laysan, below, both from Duncan.) Golden Crownbeard spreads like, well, weeds, in thick mats that crowd birds out of potential nesting sites. When birds do manage to establish a nest, the quick-growing plant (which can shoot to 8 feet high) can cluster around the nest and prevent parents from reaching their chicks. But, the tide appears to be turning.

Thanks to an extensive eradication project, FWS reports that it is beginning to get the upper hand on this pest plant. The work isn’t easy, though, requiring near-daily herbiciding by hand, as well as strict protocols for cleaning everything that arrives at and departs from Midway. These efforts appear to be paying off–most of the mature Verbesina plants on one of the atoll’s islands are history, and officials expect full eradication from Midway by 2017.

It’s too soon to draw a concrete link to the eradication project, but atoll’s birdlife seems to be thriving in recent years. Between 2012 and 2013, populations of Laysan and Black-footed Albatrosses at Midway reached near-record levels. And just a few months ago, conservationists celebrated the hatching of a Short-tailed Albatross on the atoll, only the third time this rare bird has produced a chick outside of Japan. Scientists hope that what they’ve learned from this project may help drive invasive-control measures on other islands and possibly even the U.S. mainland.

White Puffin off the Isles of Scilly