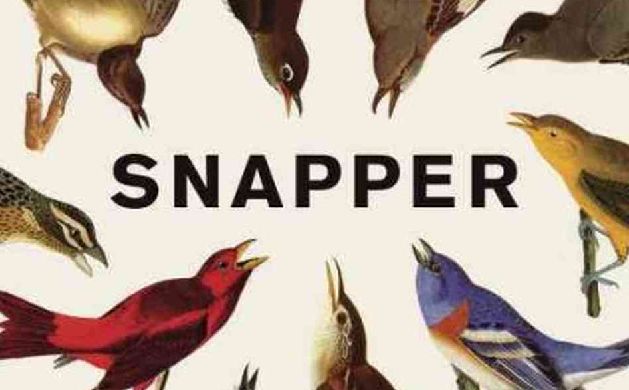 Today, I defend my thesis. In that light, I am looking at this debut novel from the guy who got his MA in Creative Writing in 2010 — yesterday, in terms of the slow grind involved in publishing a book — and seeing the future, perhaps. Snapper is a novel built from stories — no doubt at least some of them are the stories that Brian Kimberling sweated out in grad school. Now it is a book from a swank New York publishing house, with a fantastic jacket design and a significant marketing push (I ran across a quote from it in Outside magazine yesterday, and of course it is being reviewed on the premeire birding blog on the entire Internet.) If Mr. Kimberling has not popped open a bottle of the bubbly yet, he should.

That said, building a novel out of vignettes is tricky business and that shows, at times. The through-line is rambling, the plot is not the strong point — which is fine, but lays far more pressure on the characters, and in particular the narrator. Our guide through the woods and towns of Indiana is one Nathan Lochmueller, who looks back to tell the tale of a coming of age that involves a lot of crawling through the woods on breeding-bird surveys, a lot of beer, and a few scrapes with implacable forces like the law, armed KKK members, and snapping turtles. Nathan’s love-hate relationship with the culture and landscape of his native state is one that many heartlanders can, I imagine, relate to — it certainly rang mostly true to my experiences of Western New York, not to mention a brief, terrible jaunt to Bloomington in my youth. All of this manages to be interesting, in a discursive way — specifically in the manner of hearing these stories from a low-key but opinionated, articulate man in a bar with his second beer. Just relax and don’t try to keep track of the timelines too carefully and you’ll be having a good time.

But when that guy at the bar starts going on about his ex-girlfriend, it’s time to visit the bathroom for a while. The pages of this book devoted to Lola — and first of all, the author elected to name this character Lola — filled me with unease from the start. Lola is a manic pixie dream girl, a free spirit, a Ruby Tuesday who can “break a man’s heart with a shrug or a sigh” according to the cover flap, but of course this is not actually about a man, most men would be capable of recognizing that she’s a person. “A man” here means Nathan Lochmueller. Which is fine. Even Nathan’s hapless, passive-aggressive reactions to Lola being Lola are realistic in the sense that this is often how smart but inexperienced young men act when confronted with women who don’t do what they expect. It’s the fact that the narrative voice remains in Nathan’s corner so much of the time — random characters floating in to tell him that he should resent her independence, a final scene where her failure to moon over him the way he does over her is part of a vast edifice of perceived ethical collapse — that gave me hives about the entire romance storyline. Happily, the episodic nature of the stories means that when Lola doesn’t appear, you can just forget about her for a while. Unhappily, she keeps coming back.

That said, sometimes a guy does manage to talk her out of his system, and if Kimberling has managed that here, then I look forward to his future works.

« Previous post
A Dietary Alternative for Feral Cats?
Next post »
Shorebirds and Gulls of Florida’s Treasure Coast: Where the Tropics Begin