It was already dark in mid-October when we arrived to the Costa Rican birding mecca of Rancho Naturalista to have dinner on the veranda but then were interrupted with a call: There’s a Mottled Owl at the other side! You can imagine the rest: everyone jumped from the table to look for the owl. Lisa Erb, the manager and owner, but also a former bird guide, perfectly understood her guests.

After dinner, some teams walked around hoping for some more birds. My team, the Redstart Wranglers, was still on the veranda when our guide Abelardo Benavides called us out: There’s a potoo calling! All Wranglers went to the other side of the lodge listening… a potoo mixed with human voices. That’s another team playing potoo calls from a smartphone. You have to be extra careful when on a bird race… Hey, wait, let’s play them back some other bird!

Belonging to the Caribbean (Talamanca’s) foothills biome, Rancho Naturalista protects 60 ha of secondary premontane forest and has the fourth longest eBird list among the hotspots of Costa Rica: 478 species, including 36 raptors and 38 hummingbirds. But, beside the ranch itself, up to two miles away there are six more hotspots whose names often end with “near Rancho Naturalista”. Curious to see what the combined list would show, I used the eBird polygon tool to sum them all up to 502 bird species. Now, how many lodges can you tell of with such a list? 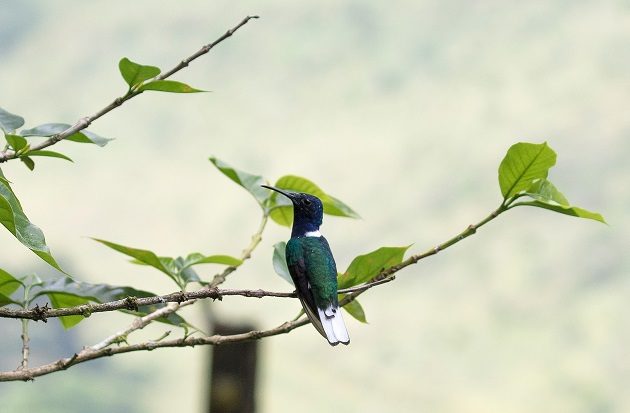 Morning started with coffee and sweets and some more birding along the four ranch trails ranging from 400 m/0.3 mi to 2.5 km/1.6 mi. I spent the morning with Lisa among the hummingbird feeders at the upper terrace of the lodge, observing White-necked Jacobin, Green Hermit, Green-breasted Mango, Violet Sabrewing, Crowned Woodnymph and the Rufous-tailed Hummingbird.

“Hmmm…. well I moved in 1984 to live at Rancho and it was a coffee and sugarcane farm back then. We tried everything, Hawaiian pineapple, black pepper, even jalapeños, and we could not make money from farming,” Lisa told me. 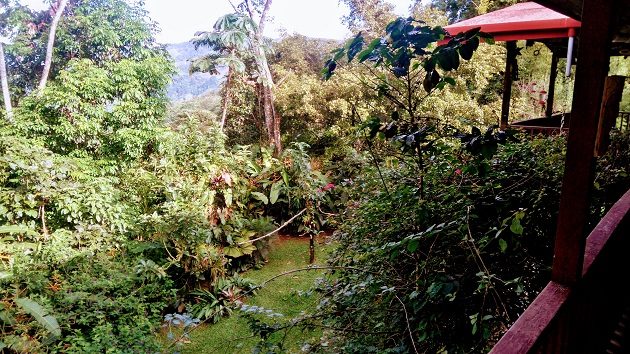 “We loved the forest and had never cut it since we first owned the property. Then my dad spoke to some friends that lived up in the Costa Rican highlands who said they were going to have birdwatchers come to stay with them. My dad asked how did they do that? And they said they put an ad in Bird Watcher’s Digest and people would came, so we did that too! It started small and grew bigger. Over the years we had to expand but we never stopped being a strictly birding lodge. 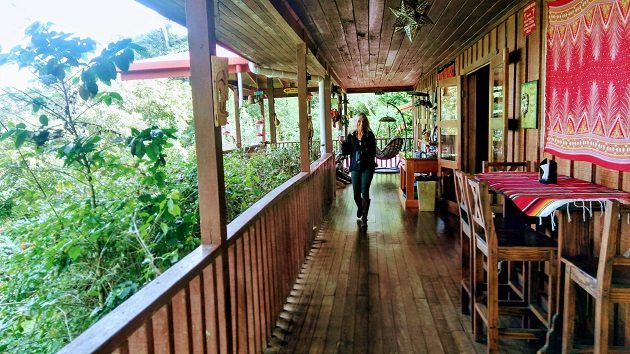 “We started at the exact perfect time when ecotourism was starting – it was lucky! Plus, I love birds and birding and I begin to guide and did that for 12 years. That background helps me feel what birders want and need in a lodge. We have also been lucky in having awesome guides and they go on to guide for different companies all over the world.”

That background certainly helps, I noticed that. Lisa knew what I wanted way before I knew it, making Rancho Naturalista the kind of place – the rarest kind, actually – where one comes as a guest and leaves as a friend.

Later that day, we went to the El Copal Biological Reserve (about 20 km/12 mi from the Rancho) where while climbing the stairs I found the gem I missed that morning. In a flowering bush maybe two feet from me, there was the snow! I found the snow in Costa Rica, the endemic Snowcap hummingbird, that is. Just imagine how handsome they can be… Well, this one tops that! 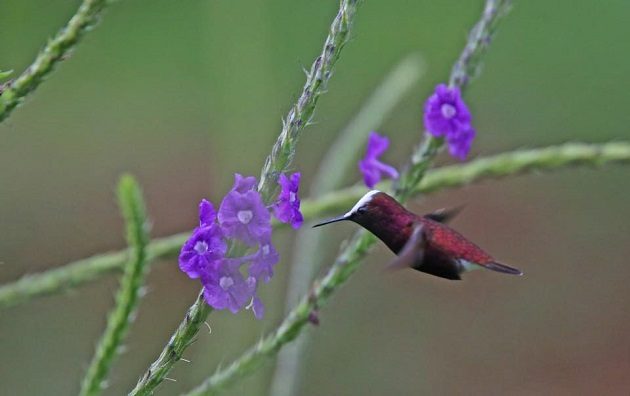 From Lisa’s upper terrace, two volcanos can be seen in the distance, the active Irazu and the Turrialba. Alex, our driver, slowly drove up the Irazu Volcano National Park, stopping by this forest or by that bridge. The higher up we went, habitats looked more like mountains of Europe than the tropics.

A group of dead but still standing trees… a pecker… an Acorn Woodpecker… one more… and a few more… about ten Acorn Woodpeckers!! I have never seen that many peckers at the same spot. And now add a few endemic Flame-throated Warblers and Slaty Flowerpiercers to that picture. 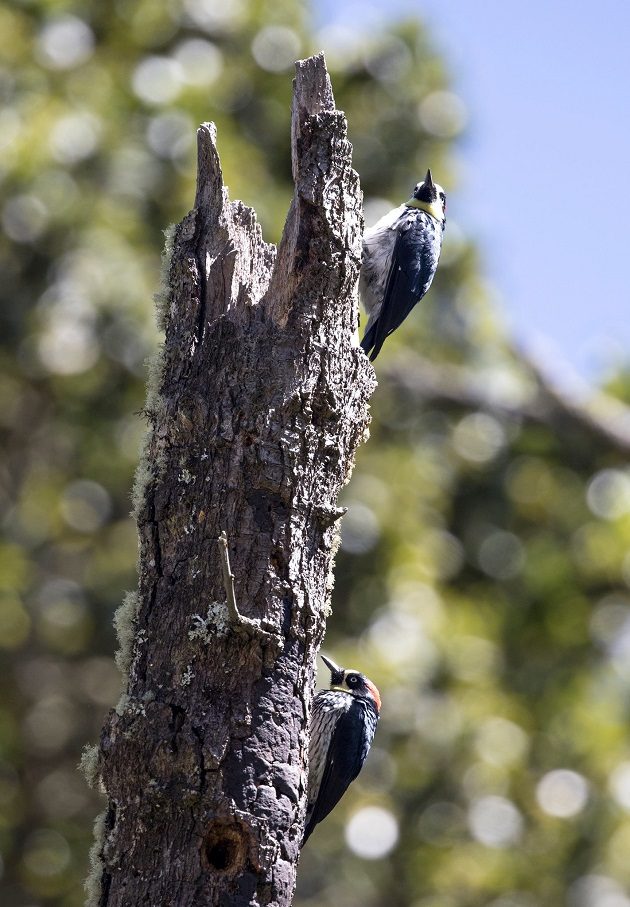 Rocky areas with low bushes near the summit of the volcano, endemic Sooty Thrush by the road. A cove protected from the winds – endemic Volcano Junco and the view over the main crater. At 3,400 m/11,000 ft, the very top and views over fluffy, white cloud landscape and the wind! That wind… The temperature was barely above 10oC/50oF and I just took a few photos before retreating into the van.

On our way down, let’s stop by that bridge… hey, what are those guys watching? Sergio Arias, the mastermind behind this bird race was in the group and it was him who spotted it first – the glorious male Resplendent Quetzal! (cover photo by Niklas Aronsson)! My jaw drops. Not in my wildest dreams had I dared hope to be able to see this one, always thought it to be the bird of the deepest forests… and here it was by the roadside! Perched, posing for us. A smile formed in the corners of my lips, to stay there until I fell asleep that night. 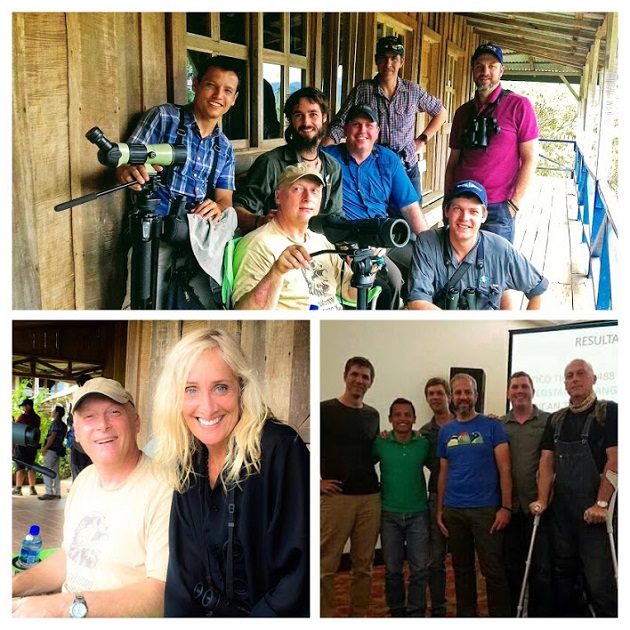 After 7 and a half days and 1600 km/1000 mi of straight birding, the afternoon of the October 19th saw the finishing ceremony of the first Costa Rica Bird Race. Who won the race?

I did, of course. To be invited to this race as an absolute beginner in American birding was a victory in itself. Yes, there were participants who may have seen a few more birds than I did (maybe 200 more, to be honest), but more than 90% of my birds were lifers – now, try to beat that record! Take Adam Riley for example: an outstanding world-class birder, yet only 1% of his birds were lifers, which clearly proves my point (I will not tell you that he has already observed 85% or so of the bird fauna on Earth). 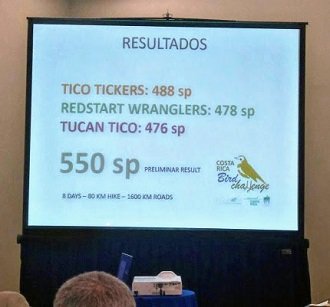 Okay, that was my reckoning, but the official results slightly differ from it. The Redstart Wranglers had observed 478 species, trailing the leaders by just 10 species, with third place coming in close, only 2 sp. behind. Yet, in many ways, we are all winners: combined, all three teams saw about 550 species in a week – well over half of Costa Rica’s 920 species! We actually saw 5% of the birds of the Earth.

Still, as Kenn Kaufman once said, the best birder isn’t the one with the longest list, but the one who had the most fun along the road and I reckon, that would be me.

Personally, I was lucky to be among such a great bunch of birders from whom I learned a lot – thank you guys, especially my team-mates (in no particular order) Rob, Ben, Ed, Dylan and ever hard-working Abelardo, and last but not least, the organisers, Sergio and Adriana, Futuropa and ICT. Thank you on this glass of pura vida.