In my previous post , I described a moderately successful owl prowl, in that I did spot an owl or two, obscured though those views may have been. But I ended the account with a cliffhanger, alluding to an even better owl sighting later that day. If you read the title of this missive, you already know how lucky I got. Here’s how it all went down…

While hobnobbing with the Westchester Rivertowns birding set, I heard someone mention a recent visit to the Piermont Snowy Owl. For those of you outside the NYC Metro Area, Piermont is a lovely little Rockland County town tucked in along the Hudson River, just south of the Tappan Zee Bridge. The Core Team used to visit Piermont quite often, either to kayak through the phragmites or catch a show at the hidden jewel called the Turning Point. But even though Piermont is sandwiched between Hook Mountain and Tallman Mountain State Park, the former a prominent hawkwatch promontory, I’ve never associated the area with stellar birding, certainly not owling.

However, a Snowy Owl did show up in Piermont weeks ago. Preposterous but true. The NYC birding list buzzed about it three weeks ago when it first inexplicably arrived. You see, this is not typical Snowy Owl terrain. Why a proud, rodent-eating raptor like Nyctea scandiaca would adopt a heavily-trafficked site along the Hudson River, a spot with nary an inch of tundra in sight, is beyond me. Why it stayed this long further boggled the mind. I thought I’d missed it for sure, but since some of my bird spotting colleagues visited it on Saturday, I deemed it prudent to get while the getting was good.

So I swung by base camp to pick up the full Core Team complement. Yes, this adventure included both the junior and senior divisions of our organization. The trip from the Bronx to Piermont wasn’t long at all, and, in no time at all, we were dragging our kids for a long walk down an even longer pier. Unfortunately, the pier is as long as the mont is high, facts which indubitably bring the town fathers no end of pride. This gave us plenty of time to contemplate the cold wind whipping off the icy river. Sara asked if our mad dash to view a bird that didn’t, by rights, belong perched on the tip of Piermont’s most prominent feature qualified as twitching. I assured her that this deliberate pursuit of a rare birds to add to our life list most certainly did constitute a twitch, but only assuming it was successful. It would be a very good one too, since the Snowy is a bird high on both of our dream lists.

I am happy, ecstatic even, to say that the Snowy Owl was right where we expected it, perched on some tall pilings, completely unperturbed by the belligerence of the local crows and gulls. If I understand correctly, most snowy sightings occur at a great distance, usually through a spotting scope. Our first view of this spectacular bird, so unlike any other species, was much closer than that. Binoculars were sufficient to get an eyeful of the owl’s plumage of purest white, adorned with delicate charcoal etchings. Though the bulky bird had its back to the shore, its head swiveled around frequently in that odd way that only owls and the demonically possessed can muster.

We drank deep of the sight of our first Snowy Owl and we weren’t the only ones. Based on the number of optics-toting, khaki-clad pedestrians traversing the pier, a good chunk of the region’s birding population has already made the pilgrimage to Piermont. If you live in the area and haven’t seen this bird yet, you may want to make your dream of a perfect owl sighting, that sacred dream we all share, a reality. Skip work if you have to. If the owl is there, you won’t regret it! 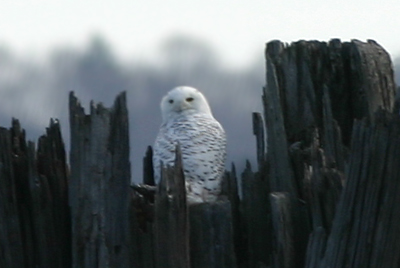