Tanzania – Africa at its best

Tanzania is without a doubt the quintessential African safari nation. Nowhere else in Africa do the preconceived ideas of the continent really exist in such living detail; tall, red-robed Maasai herding their skinny cattle, endless grasslands studded with flat-topped Acacia trees and grazed by herds of zebras and wildebeest, and dramatic volcanic calderas brimming with big game and fierce predators!

A question I am frequently asked by birders and wildlife enthusiasts is: “if I only visit Africa once, where should I go?” Despite being a proud South African, my honest answer is Tanzania. This country boasts over 1,000 bird species, vast wildernesses, a superb network of protected areas, the greatest concentration of large game and predators on the planet, excellent lodges and friendly people.

Highly recommended birding and wildlife sites include Selous Game Reserve, the Eastern Arc Mountains, Pemba and Zanzibar Islands and Arusha National Park. For this post, I have selected what is in my opinion the three essential and must-visit sites in Tanzania and these all fall within the classic Northern Tanzania safari circuit. This is the most frequently visited part of the country and there is certainly a reason for this! Vast swathes of the region are protected parks, well serviced by tourism infrastructure and lodges, in close proximity to each other and offering the very best of Africa’s wildlife-watching and birding. The region’s only disadvantage is its resultant popularity, and it can get crowded, but by carefully selecting smaller lodges or mobile tented camps, this can be avoided. Another trick is to visit during the April-May low season, a great time for birding, less tourist traffic and to boot, it’s approximately 20% cheaper and single room supplements are often waived!

So here are my three essential northern Tanzanian sites:

The Serengeti – derives its name from the Maasai word “serengit” meaning “endless plains”. This 12,000 square mile ecosystem stretches across north-western Tanzania into the Maasai Mara in Kenya. Most famous for the great wildebeest migration, a phenomenon of 2 million wildebeest, zebra, gazelle and eland seasonally moving across the plains and woodlands following an ancient course charted by seasonal rainfall. For 9 months of the year, this great, bellowing herd can be found in the Serengeti and watching the long lines of grunting wildebeest moving across the plains is truly a remarkable experience. The migration is also tracked by many of the park’s predators and great numbers of Lion, Cheetah, Leopard, Spotted Hyena, jackal and giant Nile Crocodile take advantage of this massive glut of protein, especially during the calving season when up to 8,000 Wildebeest calves are dropped per day! Positive news of late is that the Tanzania government has officially decided to scrap plans for a major highway across the Serengeti which would have disrupted the migration and caused untold environmental damage. Approximately 1,500,000 Blue Wildebeest move through the Serengeti ecosystem on their annual migration A lesser known fact is that 250,000 Plains Zebra and thousands of other game also join the wildebeest on their migration

Over 500 bird species have been recorded here, the staggering number due to the variety of habitats ranging from open grasslands, riverine forests, Acacia thickets, broad-leaved woodlands, swamps and lakes. Typical species include busy Secretarybirds that patrol the grasslands, families of Common Ostrich, White-bellied Bustards, Yellow-throated Sandgrouse, vultures, snake-eagles and numerous seedeaters, including lovely Purple Grenadiers and Green-winged Pytlias, to mention just a few. The Serengeti is also home to some serious specialties sought after by the most hardcore of birders, including the localized Gray-breasted Spurfowl, the bizarre Rufous-tailed Weaver (the latter two endemic to the Serengeti ecosystem), Fischer’s Lovebird, Usambiro Barbet and the recently rediscovered Karamoja Apalis.

Day upon day can be spent in this vast and productive wilderness of epic proportions without ever feeling that the limits have been reached! The attractive Gray-breasted Spurfowl is endemic to the Serengeti ecosystem The unique, blue-eyed Rufous-tailed Weaver forms an ancient link between weavers and sparrows and is also endemic to the Serengeti ecosystem

Tarangire National Park – lies to the south of the Serengeti and is a 1,100 square mile reserve centered on the Tarangire River. This perennial watercourse is a haven for wildlife especially during the dry season when thousands of elephant and other game congregate here. The Baobab-studded woodlands and wetlands of the park harbor over 550 bird species and they sure come thick and fast! The entrance gate to the park is in particular one of the birdiest sites I have ever been to anywhere in the world and in just an hour here you can rack up 100 species! Specials of this park include the Tanzanian endemic Ashy Starling, beautiful Yellow-collared Lovebirds, Mottled Spinetail (spinetails in Africa are short-bodied swifts not long-tailed, skulking passerines!) and Northern Pied Babbler. The wetlands harbor such delights as Rufous-bellied Heron, the stately Saddle-billed Stork, Gray Crowned-Crane, Long-toed Lapwing and if fortunate as we were during my last trip, the stunning Northern Carmine Bee-eater. Raptors, both diurnal and nocturnal, abound in this park, from massive Verreaux’s Eagle-Owls roosting in leafy trees along the river to African Hawk-Eagles and Lizard Buzzards in the woodlands. And of course the big game is an added bonus. Elephants are nowhere more abundant and one can often find oneself in the midst of a peaceful, grazing family herd, a special experience indeed to be so close to such huge animals. Tarangire is also an excellent reserve for seeing Lion, Cheetah and Leopard, the last mentioned are especially fond of snoozing on the large branches of the park’s many Sausage-trees. Leopards spend much of their day lounging in trees

Ngorongoro Crater – is the world’s largest unbroken volcanic caldera, 2,000 ft deep with a valley floor of 100 square miles. It was originally a giant volcano, in height possibly even challenging Mt Kilimanjaro, but 2-3 million years ago, it collapsed on itself to form the magnificent feature we now call Ngorongoro Crater! Several lodges perched on the forested rim of the crater provide their guests with unbelievable views (and especially sunsets) from their rooms and access to one of the world’s most incredible wildlife spectacles. Approximately 25,000 head of game make the crater their home, which also plays host to the highest density of large predators in the world. A typical day spent in the crater will produce sightings of numerous giant African Elephant bulls, real great tuskers (interestingly the steep slopes of the crater walls discourage family herds of elephant as well as Giraffe), 1,000’s of very approachable Blue Wildebeest, Plains Zebra, Cape Buffalo and gazelle, East Africa’s most easily seen Black Rhinoceros as well as massive golden-maned Lions, more Spotted Hyena than you can shake a stick at, and regular sightings of Cheetah, Leopard and other predators. Sunset over the Ngorongoro Crater, a sight to behold! Only bull African Elephants reside in the Ngorongoro Crater

The birding is equally astounding. The more open grasslands are dotted with Kori Bustards, the world’s heaviest flying bird. In breeding season, Jackson’s Widowbirds jump out of the tall grass in one of the world’s strangest display flights, cute African Quail-Finches are best seen as they come down to drink at waterholes. The lovely Rosy-throated Longclaw is nowhere easier to find. The huge salty Lake Magadi attracts thousands of Greater and Lesser Flamingo as well as many waterfowl and waders. Lerai Forest is dominated by tall Acacia trees and teems with birds. It’s a great place to look for roosting raptors including Bateleur, Martial Eagle and numerous species of vulture. In the northern winter months, Palaearctic migrants abound; Greater Whitethroat, Common Nightingale, Eastern Olivaceous Warbler to name but a few. Parts of the crater wall and slopes are dominated by Afromontane forests and here birding is a delight. Sunbirds in particular thrive and residents include the unique, sickle-billed Golden-winged Sunbird, but other highlights are Tacazze, Bronzy and Eastern Double-collared. Other specials to keep an eye out for include Hildebrandt’s Francolin, the searingly bright Schalow’s Turaco, Cinnamon-chested Bee-eater and Oriole Finch.

Time spent at these magical sites is automatically converted into memories of a lifetime! All I can say is do it! The world’s heaviest flying bird, the Kori Bustard, is pleasantly common in the crater, here a male is displaying 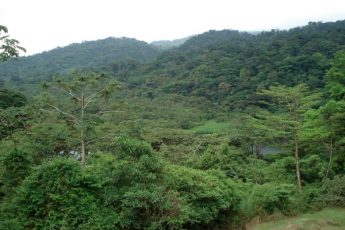