The end of another year is nigh. In Costa Rica, we know it by way of windy nights with clear skies, slightly cooler temperatures, and an abundance of festivities featuring carnie rides, prancing horses, and parades. Other reminders of December in Costa Rica are palm trees festooned with Christmas lights, an abundance of annual bird counts, and sightings of winter birds like gulls, ducks, and a scattering of Yellow-rumped Warblers.

Personally, I had a year accompanied by a blend of changes and birds. It has been good, I am grateful! Although I didn’t make any efforts to chase birds or attain a big year list, regular guiding and birding in various parts of the country still rewarded me with more than 640 species in Costa Rica. Birding in every form is a gift and since there are too many highlights to mention, I’m not sure if the following are the best ones from my 2018 but they are treasured nonetheless. 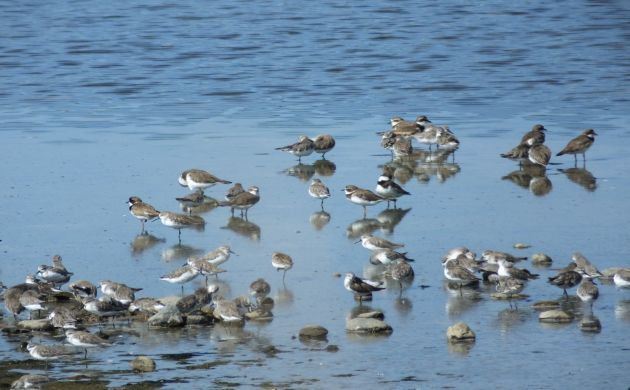 I didn’t see many species actually. I didn’t even get in much shorebirding. For that reason, my 2018 list lacks various regular mud loving migrants like Long-billed Curlew, Wilson’s Phalarope, even Pectoral Sandpiper. The shorebirds I did see, though, are highlights by rote. They earn the annual avian medal of honor because they fly to Costa Rica from as far as Alaska and other places where Snowy Owls roam. The distances are almost unimaginable. The changes are vast. How do those thousands of Western Sandpipers do it? Just fly from there to here to rumble around the mud flats of the Nicoya Gulf? The Wilson’s Plovers with their stout crab cracking beaks and hunched demeanor, they have less distance to fly but it’s still no small feat to zip from Alabama to Costa Rica. When we also remember that shorebirds routinely avoid the high velocity death dance of the Peregrine, referring to them as “amazing” becomes just as appropriate in 2018 as it would have been last year, 1989, or 1689. 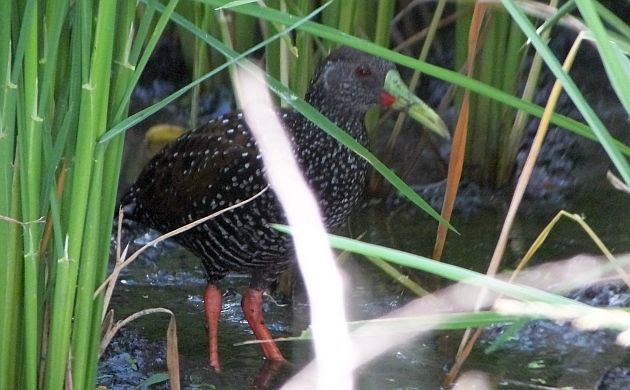 I was very pleased to see this smart looker because it’s rare, known from few reliable sites in Costa Rica, and well, it looks fantastic. The conditions in rice fields have to be just right to host them and thankfully, they were when I was in their neighborhood in November. One gave excellent close looks and another did a classic, sputtering chicken-like marsh bird flight right in front of us. 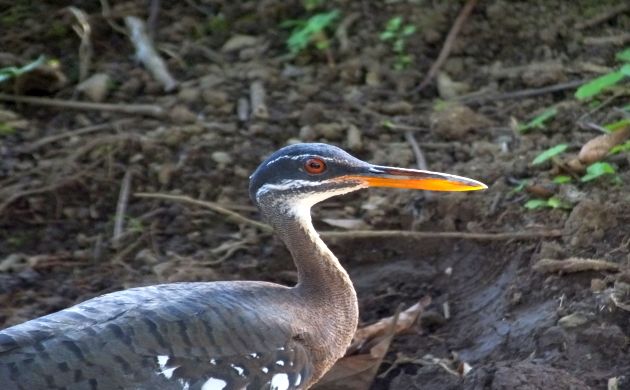 I had several encounters with the Neotropical Kagu. There were a few fleeting glimpses, some typical looks at birds in rocky rivers, and a couple that were just plain loco. The first crazy Sunbittern encounter happened at Lands in Love with a bird that stood in plain view. An honest Little Blue Heron pretender, it plucked tadpoles from a muddy pool, waltzed around with a feather in its bill, and refused to budge no matter how close Mary or I approached it. Some months later, I had a similar experience with one at a site known as “El Cafecito”. This one also carried a feather in its beak, snatched tadpoles, and stood in the open for all to see. Life is always better when bearing witness to Sunbittern madness.

If I had to pick a highlight from the year, both GBDs would tie for number one. Any day of birding in Costa Rica is exciting but when you focus on nothing but birds where hundreds of species are possible and share that experience with your favorite person, it tends to be outstanding. The GBDs were replete with their own highlights, next year we will see if our team can take the top prize.

Carried out by Ernesto Carman and associates, this project has been tracking the elusive Unspotted Saw-whet with serious success. They have found birds at day roosts and just announced finding the first nest of this mega for Costa Rica! They are also involved with a project to learn more about and conserve the endemic Cabanis’s Ground-Sparrow. Learn more about supporting these local important conservation efforts by visiting the project sites. 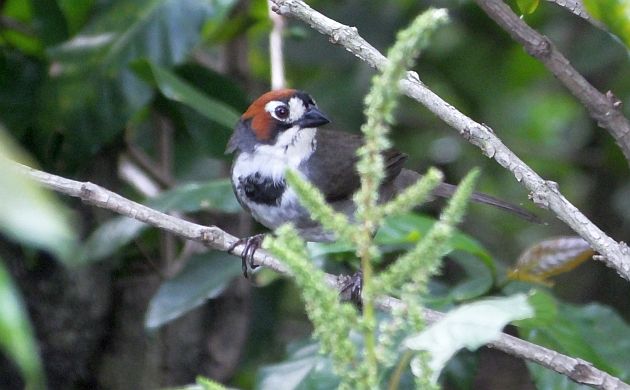 The endemic ground-sparrow is actually a cool, colorful towhee.

Just when a birder thinks that a list of 920 plus species is big enough for a place the size of West Virginia, a few more fly into the local birding scene. Although none of these were unexpected, they are still major sightings for Costa Rica. First, a lost, young Great Black-backed Gull was espied on the Atlantic coast at Tortuguero, no doubt roving to see what sort of havoc it could create in tropical climes. Then, the same Ernesto of saw-whet fame heard, recognized, and recorded a Couch’s Kingbird during fall migration! Last and quite possibly the best, Chambito, a fishing and birding guide at Cano Negro, saw and photographed a Yellow-billed Tern in November. Many thanks to Birmingham Audubon biologist Katie Barnes for helping with the identification of this bird and assuring that no, it was not a “Leastie”!

A new country bird for moi

It’s not that often that I add a species to my country list. Unfortunately, pelagic trips don’t sit well with me and I generally lack the time to chase migrants or look for White-tailed and Rufous Nightjars. But, if I get out birding enough, probability dictates that I should eventually connect with a few rare but regular birds that would act as additions to my country list. For example, I still need Dunlin for Costa Rica. I don’t even know why I haven’t seen one yet but maybe one will be right there in plain sight the next time I go shorebirding. I have wondered the same thing about the Violet-green Swallow but thanks to guiding near Cerro Lodge a few days ago, I finally saw one within the borders of Tiquicia. It was flying with a bunch of Barn Swallows and one Bank and did myself and my client a favor by flying directly overhead for definitive views. I am quite pleased, I hope it sticks around long enough for others to also see it.

I love seeing super cool birds in uncommon places and situations, especially when I can see the bird right there in the open and away from all of that fastidious tropical vegetation. Gartered Trogon is a regular cable sitter, especially after rains, I enjoyed several such sightings this year. The same goes for Turquoise-browed Motmot and Lesson’s Motmot, and once in a while, a Broad-billed Motmot can do a birder a favor, all of these more likely on cables in the early morning. My best cool cable birds this year were Yellow-billed Cuckoo, White-fronted Nunbird, and ye magnificent Resplendent Quetzal. The cuckoo blew my mind by appearing on a roadside cable at Cahuita and perching for a few minutes. The nunbirds acted fantastic on a couple occasions in the Arenal area, and the quetzal perched next to a fruiting avocado on the slopes of Poas Volcano. 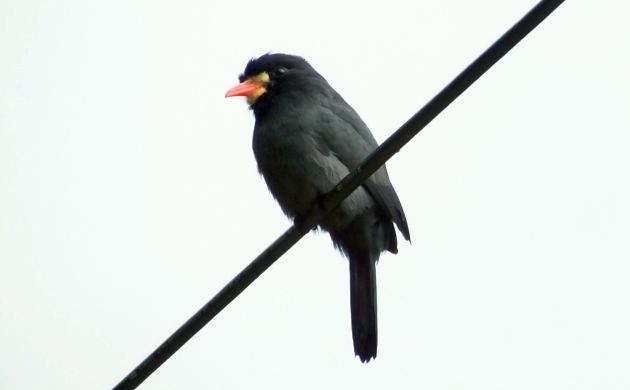 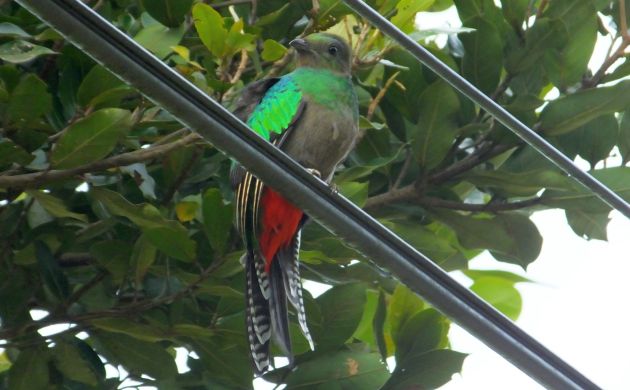 Proof that quetzals can indeed use the same habitat as a Tropical Kingbird. 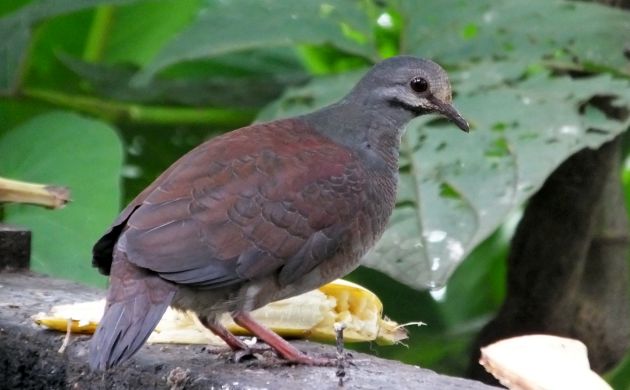 It’s always cool to see feeder birds. Forget that purist stuff about only seeing birds in natural conditions. Although I can appreciate the sentiment, I like even more having a chance to study the prongs on a barbet’s beak while casually glancing to the left to admire the plumage of a Northern Emerald Toucanet. The best is when beautiful, shy bird species like quail-doves partake in feeder delights. For much of 2018, a Buff-fronted Quail-Dove was doing just that at the Colibri Cafe in Cinchona. Although it usually skulked below the feeder, once in a while, it jumped right up on the wooden platform to snack on papaya.

The birds are great, all sorts of birds but the honest to goodness best thing about experiencing them is sharing them with others. I had the chance to do that with clients and favorite people throughout the year and am grateful. I look forward to more shared birding in 2019, maybe “Team Tyto” will try for a big year…

Happy Holidays and Happy Birding in 2019! 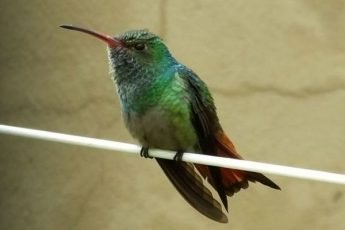 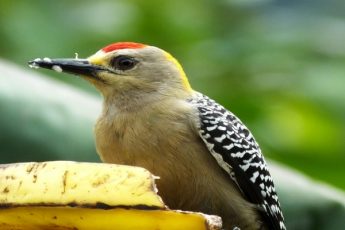 How to Celebrate Global Big Day from Home in Costa Rica

« Previous post
The Splendor of Birds and National Geographic: a Book Review
Next post »
Where Are You Birding This Fourth Weekend of December 2018?