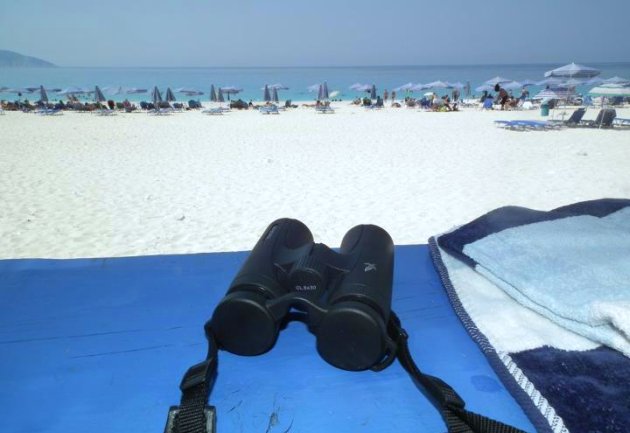 An afternoon is already growing old while I am driving downhill to the Livadi marsh at the island of Kefallonia, Greece. Behind the marsh is a quarry, in front of it the Gulf of Argostoli, a small pine wood to the right and some eucalyptus trees to the left. I am watching from the main coastal road and do not see much – several Little Egrets and Grey Herons, one Common Kingfisher… is he going to be my best bird here?

A downward movement against maquis covered hill in the background – the wings! Long and very narrow – too long and too narrow even for a falcon, all but one: Eleonora’s Falcon! (Somehow, the length of its wings is apparent only in the first second, after that, it does become a falcon-like falcon.) A quite uncommon bird – there are only about 6000 pairs on the planet and this is one of only a handful of my observations of this species. My first one was about 20 years ago not far from Thessaloniki, three dark morph birds, and I still remember it. (It’s an odd thing – do you remember that dialogue from the City Slickers: “Phil: So, do you hate baseball? Bonnie: No, I like baseball. I just never understood how you guys could spend so much time discussing it. I mean, I’ve been to games, but I don’t memorize who played third base for Pittsburgh in 1960.” Do you still remember some bird that you have seen 20 years ago? Of course you do! But can you explain why to your wife? Especially just after you have forgotten… whatever she finds more important than some bird 20 years ago?)

Two-thirds of the world’s population breeds colonially on Greek islands. Unlike other falcons, they do not breed in spring, but in late summer, to exploit the abundance of songbirds and pick up those first-time (and last-time) migrants from the sky. Young Eleonora’s Falcons must develop quickly because they are migrants themselves, moving across the Sahara and down the Swahili Coast to Madagascar.

My falcon glides low above reeds and, all of a sudden, the marsh that appeared almost bird-less is filling up with swirling life. Some twenty Wood Sandpipers and about thirty Marsh Sandpipers took low flights, followed by more than 30 Little Egrets (until then, they appeared to number only five to six), plus seven Black-winged Stilts – all at the same time.

Some time later, one Western Marsh Harrier flushes up about forty Eurasian Teal. One by one, Grey Herons are slowly taking flight and leaving towards Farsa for the night roost. In the approaching sunset, a male Common Kestrel is hunting… possibly some of the Common Quail whose “wet-my-lips” I can hear from the grass.

Leaving the Livadi marsh, once again I spot the Eleonora’s Falcon on a dry branch at the very top of the eucalyptus. At first, he was chased by a Hooded Crow, roughly appearing similar in length, but the crow visibly massive and heavier, so the falcon took flight to find himself another dry branch and land near a Common Kestrel, offering more comparison time. While perched, the falcon appears 50 per cent bigger, while in flight it appears twice the size of a kestrel. Finally, one Lesser Whitethroat in a bush by the road… and a sunset turns into darkness.