The New York birderati have been buzzing lately about the spectacular avian activity at Croton Point Park in northern Westchester. Croton Point is famous for its robust colonies of wintering Bald Eagle but this former landfill also attracts an abundance of rodent-hunting raptors. Reports from the field describe loads of Rough-legged Hawk along with scads ofÂ  Short-eared Owl. The Core Team finally got a chance this weekend to bird the point with the goal of adding these two species to our list.

Spotting a rough-legged hawk wasn’t much of a challenge. We noted one perched on a small tree as soon as we pulled into the park. In fact, we saw rough-legged hawks everywhere we looked. They filled the skies, festooned the branches, and sometimes even lounged around in the tall grass. We had a chance to compare the rough-legged hawk to a Red-tailed Hawk up close and personal when representatives of their respective species engaged in a brief dogfight. Even better, we enjoyed long side-by-side views of the buteo next to a Northern Harrier, by far the most common raptor at Croton Point. The rough-leg and the harrier share many superficial similarities, particularly a white mark by the tail and a fondness for swooping low in search of snacks. However, the hawk is larger and stockier, with clean white underwings and distinctive dark wrists and belly. It also hovers in place with great flaps of its large wings. The harrier is slender in comparison and sports a barred tail. The many juvenile harriers working the mound wore their orange winter plumage, a stark contrast to the hawk’s black, white, and brown feathering. 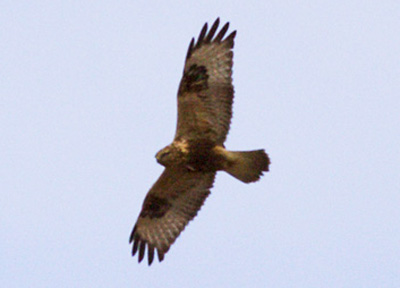 Rough-legged Hawk by Jason H.
We weren’t as fortunate in spotting our second target species. Although we timed our arrival to coincide with the short-eared owl’s afternoon hunt, we came up empty. This is not to say, however, that we went owl-less. Other birders in the area were kind enough to point out a Long-eared Owl not twenty feet from where we parked. This owl, with the infinite patience of its kind, tolerated a steady stream of supplicants infiltrating its tiny grove in search of the merest glimpse of winged wisdom. The long-eared owl, a lifer for us, is a brilliant looking bird with a bold orange face broken by contrasting stripes of black and white. Of course, we have yet to see an owl that was anything less than commandingly beautiful, so the long-ear’s charm comes as no surprise.

There exists an informal network among avian enthusiasts geared towards insuring that no rarity goes unspotted. The generosity exhibited by most birders out in the field is a magnificent manifestation of the interconnectedness of all species; as a concrete expression of this phenomenon, it strives to connect birders with the rare birds they so cherish. Owls compose a sort of currency among birders thanks to their popularity and propensity to remain in the same area for extended periods. However, in the economics of birding, an owl’s value increases as more birders spot it, so enthusiasts circulate sighting information frequently to those who seem possessed of the proper level of reverence. 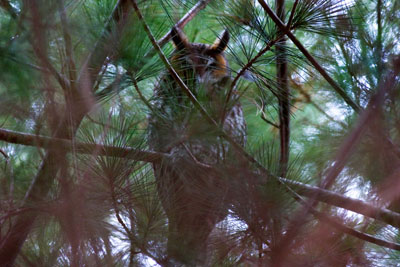 Meeting new birders is often as enjoyable as meeting new birds. One nature lover, Jim, who was out with his son, pointed us towards our first rough-legged hawk and long-eared owl. Jason, another eager birder and skilled photographer, snapped the photos above of our two lifers for the day. You can see more of his outstanding pictures here. I’d like to point out, with no small amount of jealousy, that Jason hung around long enough to see three short-eared owls. We might not have seen the owls, but in the course of walking the mound with him, we did spot, in addition to the birds already mentioned, American Tree Sparrow, Brown Creeper, Mute Swan, American Coot, Bufflehead, Common Merganser, Turkey Vulture, Canada Goose, American Crow, and the requisite Bald Eagle. We’ll get the short-ear next time.