November 21, 2020 by Patrick O'Donnell No Comments 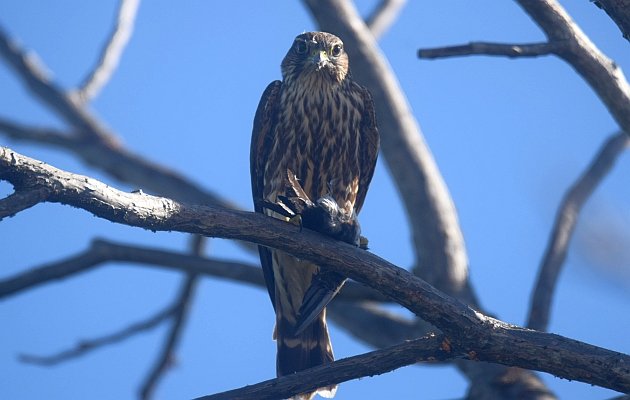 I live in the Central Valley, the most populated part of Costa Rica. For most of its history, this intermontane valley was a melange of wetlands and moist forest watered by rains that drench the adjacent mountains. The rains still fall and the valley continues to act as a basin but nearly all of the marshlands and lakes are long gone, agriculture has replaced much of the forest. Even so, despite the pressures on land and resources that stem from two million plus people, green space perseveres. Natural habitat makes a stubborn stance in riparian zones, in hedgerows, and patches of forest.

I don’t live all that far from the airport and the faint rumble of vehicles on busy roads is part of the background hum. But some days, I also hear the loud calls of a Laughing Falcon. 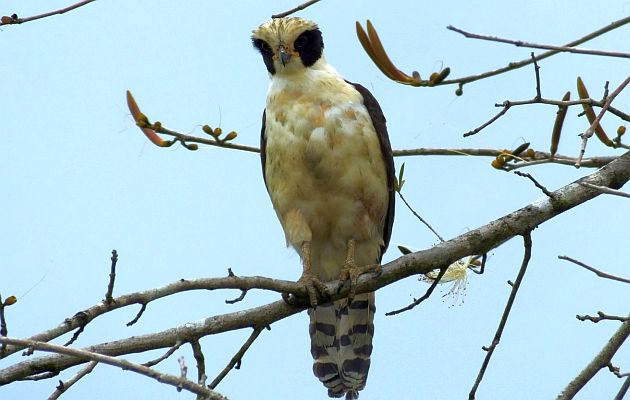 It tells me that its main food source, snakes, must persist in the coffee fields and in the green of precious streamside vegetation. Other days, there is a Ringed Kingfisher making grackle sounds as it courses over a stream. Out back, in the riparian green, every morning is punctuated by the quintessential tropical song of the Barred Antshrike. The early hours are celebrated with the loud voices of Rufous-naped and Cabanis’s Wrens. 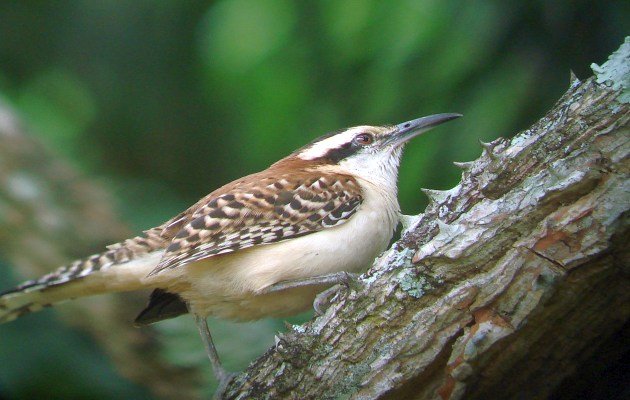 The Rufous-capped Warbler is also there and now that the northern winter has taken hold, we have daily visits of Baltimore Orioles, Tennessee, Yellow, and Chestnut-sided Warblers. Once in a while, there’s even that coveted Great Lakes bird intent on doing its own chickadee-like thing, the Golden-winged Warbler. Out back, a lot can show up, during the past month, one of the sweet avian surprises was the one and only feathered bullet from the north, the Merlin! 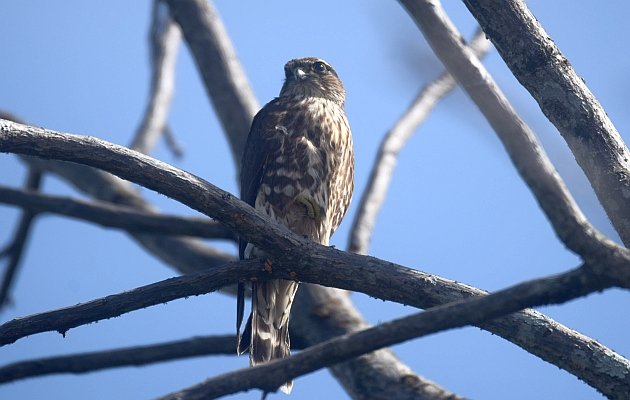 Small but equipped with big, hooked feet and a go-get-em attitude that would make any weasel proud, Merlins are a lethal force to be reckoned with. Ranging across a large swath of the northern evergreen zone, they spend their summers hunting small birds from Canada to Scandinavia and on east to the shores of the Bering Sea. Their prey eventually flies south for the winter but that would be escape is futile. Wondering where its food went, the Merlin flies south too and some come to Costa Rica. Although uncommon as winter residents, in Costa Rica, Merlins can be found plying their deadly trade in any number of open habitats. As it turns out, it appears that one such place is the green space out back.

Not exactly a wetland, nor any other space where I would expect a Merlin, the mosaic of farm fields, urban areas, and coffee farms punctuated by a green thread of streamside forest apparently works. At least it does for a young bird, at least it has for a month. That’s how long we have seen the young Merlin out back. I first saw it in October when I was innocently watching the green space out back. Another morning accompanied by coffee and a view of tropical green, watching for the flits of warblers, keeping an eye on skies for interesting flybys and wishing for cuckoos. I was just minding my own business, not expecting a thing but the kill still happened. Like the Blue-and-white Swallow it caught, the Merlin took me by complete surprise.

I still don’t know if it had been soaring high above and out of sight, or if it had used the treetops for cover and attacked from below but however it did it, the rouse worked. I might not have seen it coming but fortunately, the Merlin did me a favor by showing me what it does after catching a swallow that was a bit too slow, that was a bit too careless. 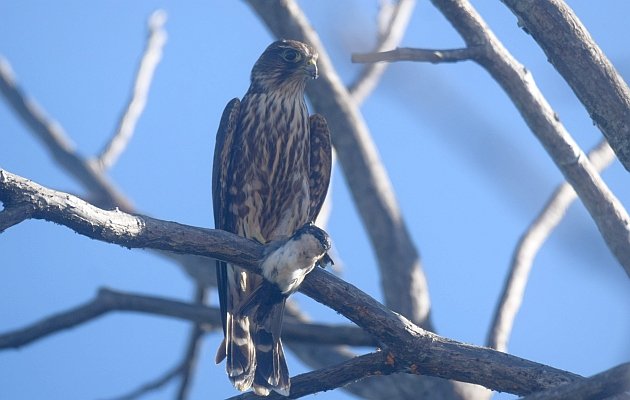 It let us watch it pluck feathers, eat the bird, and rest up in the tree just out back. Since this is not a bird I had expected in my part of birding town, I was sort of stunned. That day being a time of migration, I figured the Merlin was just passing through, that we would never see it again. But it must have liked the neighborhood, it must have been able to use its kill skills again and again because a few weeks later, there it was, same falcon time, same falcon place. Since it swooped into the same tree at the same time of day, I suspect it had tried the same trick. But that second occasion, the falcon’s talons came up empty; it only stayed for a few minutes before moving on to parts unknown. Maybe a week later, I saw it once again, but this time, flying high overhead, soaring up there in the blue looking a lot like a a swallow. Maybe that’s what it had hoped, but it didn’t fool me. I could see the narrow white bars on the tail, could tell that this was no big martin. No, this was a Merlin and it looked like that same individual that had revealed its dangerous ways. 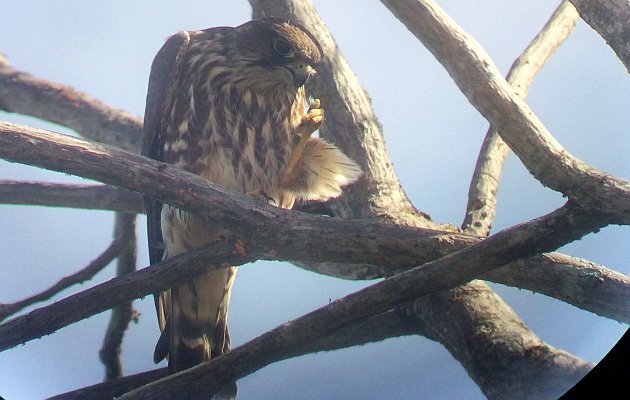 I have yet to see our quick bird catcher from the boreal zone since then but I suspect it’s still out there, roaming this part of the Central Valley in search of unwary swallows and other small birds. If it still is around, if I can see it, I will have to scan the skies with shaded eyes, be quick on the bins because our friendly neighborhood Merlin doesn’t play around. No matter how fast and aggressive they are, no matter how much they want to, they can’t afford to waste energy chasing everything. What a Merlin can do is feign being innocuous and hide in plain sight until it makes its aerial pounce. 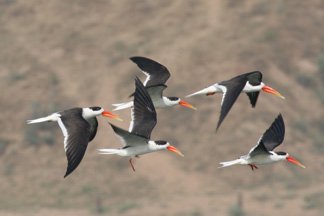