The One and Only Outer Banks Big Day

5:15 am is never easy to see, but I rolled out of bed regardless. My friend Paul Taillie and I had to meet an intrepid bunch of birders for the inaugural Outer Banks Big Day field trip at the Wings Over Water festival in eastern North Carolina. This was the first time anyone had ever done anything like this, so we had no idea what to expect. No number we had in our minds to beat. We were setting the bar for what someone hitting all the good spots on North Carolina’s famous barrier islands could reasonably accomplish. And it had to start at 5:45 am, because if we wanted owls this was when we had to get them.

It was a dark and foggy ride into Nags Head Woods, the only forest of any sort on the islands, and we paused every few hundred meters and listened for owls. The very first bird on our list was a Great Horned Owl responding to a screech owl call and, at another site, the Eastern Screech-Owls themselves made a brief whistle then passed over our heads, tiny round shapes against the sky in the gathering daylight. Targets acquired, we piled into cars and headed south to Pea Island National Wildlife Refuges, the jewel of the Outer Banks, where we were likely to cross paths with the vast majority of our species for the day.

The three main impoundments at Pea Island were packed with birds. We set up scopes and started tallying. Caspian Terns in the back, large flocks of ducks or all the regular dabbling varieties, American White Pelicans staked out in the center, ibis, herons, and egrets set against the crackling soundtrack of Red-winged Blackbirds and Boat-tailed Grackles. This is one of the most impressive sights in North Carolina, and one of my favorite places in the whole of North America. Our first surprise of the day was a young Common Gallinule that brazenly crossed from one dense stand of marsh grass to another. The species is not encountered in this part of the state every year, and one that we could easily miss on any given trip to Pea Island. For a Big Day, these sorts of birds are critical for a big list. In a little less than two hours we had gone from 2 species to nearly 70. While the light was behind us we headed to South Pond, the bottom of the three impoundments, where a Eurasian Wigeon had been spending some time. It didn’t take long to pick out the burnished head of the male among its American cousins. A half dozen newly arrived Tundra Swans were icing on the cake, overnight arrivals that turned up just in time to add them to our quickly increasing day list. There’s a Eurasian Wigeon in this photo, if you care to search for it. Photo by Steven Howell

In 2013, Hurricane Sandy cut up the east coast leaving a swath of destruction in its wake. In North Carolina, Sandy storm surges cut an inlet across nothern Hatteras Island just south of Pea Island NWR. Now called “New Inlet”, this area makes for easy access to to some of the marsh grass habitat along the sound side of the island. In these marshes lie sparrows of a sort that have never been reliable on the islands. Now, however, there is no place for them to hide. Paul and I led our group down into the marsh where we quickly encountered many Nelson’s Sparrows, a single Saltmarsh Sparrow, and a great many individuals that we could not identify to either. In addition to a great encounter with a secretive species, they were county birds for me. A Nelson’s Sparrow peeks out of an Outer Banks marsh. Photo by Nate Swick

Though our focus was birds, there’s plenty of other wildlife on the islands. We ended with 7 species of mammal, including River Otter, Gray Fox, and Marsh Rabbit, but the highlight may have been a little Canebrake Rattlesnake crossing the road at the Bodie Island lighthouse, a lifer herp for me. After all the morning excitement, the afternoon was about picking up the pieces. We headed north to the town of Duck to find land birds, picking up a nice Eastern Wood-Pewee and Yellow-bellied Sapsucker at the boardwalk there. We netted Pileated Woodpecker and Eastern Bluebird at Sandy Run Park in Kitty Hawk, but dipped on the Fish Crows that frequent the nearby Wal-Mart. By the time we were ready to head back to the marshes around Bodie Lighthouse for the end of the day, we were sitting at 95 species, 5 short of our target of 100 and just far enough that I was not optimistic of our chances of getting there. This was when the pieces started to fall into place.

At a staked out spot for Field Sparrow we missed the sparrow but picked up a Brown Thrasher (#96). Paul heard a Sedge Wren on the way to the marsh overlook and we brought it in for #97. With 3 shy and with the sun dropping, a Sora tooted out in the marsh at #98.

We feverishly scoped the ducks on the marsh for anything different, when Paul noted something flying in the distance. “(American) BITTERN!” he yelled, as 6 more picked up out of the marsh and headed south.

We were on the precipice, and Paul was in the zone. “Heron high going right! Is that Tricolored (Heron)?” And of course it was. The century mark was ours.

Upon the final count we actually hit 101, I’d forgotten to note a Sandwich Tern I had back at New Inlet, but that didn’t mean the final minutes were any less exciting. 101 species, entirely on the barrier islands, is a pretty good haul. And certainly something to try to beat next year. 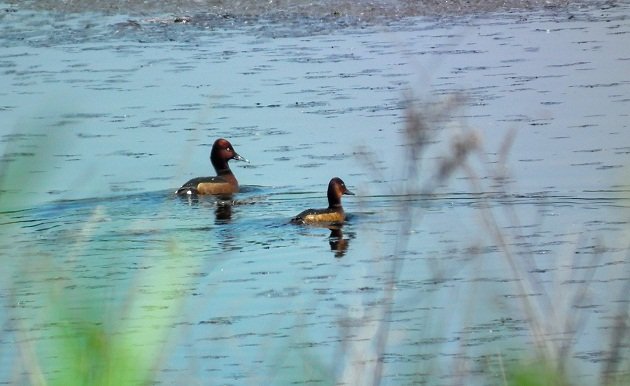