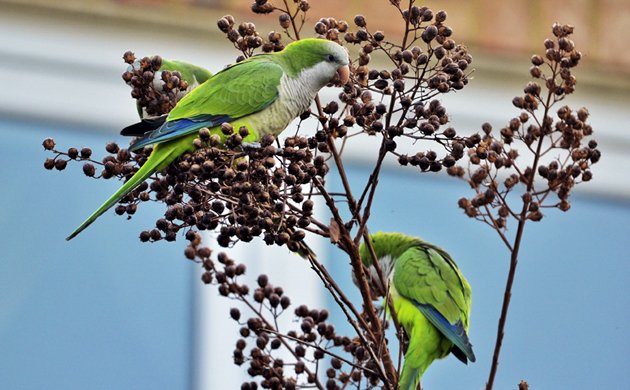 The squawk is unmistakable, a harsh, high-pitched cry with undertones of bass, lasting about 2-seconds, followed by a second, then a third “Squaaawwwk.”  It’s etched into my audio memory, which is quite a feat considering the problems I have recognizing even the most common bird cries. I look up and see three large green birds, the bright green contrasting with dark blue underwings, whitish-grayish foreheads and breasts shining in the winter sun, flying overhead. “We got them,” I say happily to the three members of my 2011 Christmas Bird Count team, strung out along the path traversing Powell’s Cove Park. “The Monk Parakeets. We have them for the count!”. There is another area of the Queens County CBC where a team will also likely see Monk Parakeets, Myipsitta monachus, but I am seriously determined to count that bird for my area, Coastal Flushing, a section of northeast Queens, New York, that includes Whitestone, home of one of the loudest invasive bird species in the U.S. I have a lot of affection for Queen’s Monk Parakeets. I grew up in Whitestone, and though the birds were not around at that time, I love the fact that they decided to populate this particular area of New York City. The first CBC entry for Monk Parakeet in Queens was in 1989 (one bird!), but there are reported sightings dating back to the early 1970’s. Not in Whitestone, that came later. According to a December 1970 article in the New York Times, there was a flock of 9 to 12 birds in Fort Tilden. Other areas of New York City where the parakeets were seen in 1970 included the upper East side of Manhattan, Great Kills, Staten Island, Ellis Island and the area around the Statue of Liberty. This is curious, because these are not areas where the parakeets thrive today.*  NYC Monk Parakeet colonies can be found in Whitestone and Howard Beach, Queens; in Brooklyn, notably Greenwood Cemetery and Brooklyn College; and in the Bronx, notably Pelham Bay Park, where Mike saw them in 2005, and City Island.

The origin story of this invasive species in New York City is uncertain. There is the usual anecdote that they escaped from an airport shipment, which sort of makes sense, since Fort Tilden is not that far from Kennedy Airport. But it is most probable that the birds are released or escaped pets. One article states that by the end of the 1960’s, over 16,000 Monk Parakeets a year were being imported into the U.S.**

The question is why these natives of rural areas in southern South America (east of the Andes) have been so spectacularly successful in establishing their colonies. Monk Parakeets are established not only in New York City, but in at least seven states (Connecticut, Florida, Illinois, Louisiana, New Jersey, New York, Texas), Puerto Rico, the Bahamas, and Quebec, Canada in North America; Belgium, Italy, England, and Spain in Europe; cities in South America (where they are considered introduced since these are not rural areas), and possibly even Japan. There are a lot of pet psittacines out there that escape or are released. Not many survive, and very few flourish. The answer lies in the nests. Monk Parakeet is the only parrot species that builds its own nest. These are extremely large stick structures (some articles compare the largest ones to the size of a car) that are usually populated by multiple breeding pairs in separate chambers. Some articles speculate that the nests offer protection against the cold. Stephen Pruett-Jones, an evolutionary biologist who has extensively studied the Monk Parakeets of Chicago, only says that the nests offer a successful alternative to the tree hollows or palm trees utilized by other parrot species. I say the nests work because these birds are not very fussy about where they build them.

Monk Parakeets are known for building their nests on utility poles. And cell towers. And, any manmade structure that is tall and offers the breadth and strength required for their super stick creations–telephone and light poles, satellite dishes, highway and railroad overpasses, electrical utility structures. They are not popular with power companies. The nests block ventilation, cause fires, and are probably unpleasant to navigate if a workman needs to get to that equipment. In Queens, I periodically read local news articles describing how Con Edison is trying gentle means of persuasion to get the birds to move—spikes, sprays, sound machines, mechanical owls. I also read more anecdotal stores about harsher measures, mainly nest removal. (Con Ed does not appear to want to confirm these stories.) On my pre-CBC scouting trips, I have increasingly found Monk Parakeet nests in, of all things, trees and bushes.  I was very surprised when I found my first nest in a bush, as were many of my birder friends, but it turns out this is not unusual. A 2009-10 survey of Monk Parakeet nests in the greater Chicago area found 42% of the nests were in trees and 58% were in man-made structures.*** Speaking of Chicago, this is where I first encountered Monk Parakeets. My daughter was taking an evolutionary biology course at the University of Chicago and was given an assignment involving surveying Monk Parakeet nests in Hyde Park. These surveys were regularly assigned to University of Chicago students and were part of the data used by Pruett-Jones and his colleagues. Of course, the only thing my daughter knew was that she had to go out in the cold and look at birds. Which were her mother’s passion. This was in my early birding days, however, and I was skeptical. Parakeets in frozen Chicago? Sounded crazy. So, I flew to Chicago, where my daughter directed me to Washington Park in New Hyde Park, the area of Chicago where the University is located. And, there I saw the famous Monk Parakeet nests saved by Mayor Harold Washington. The story goes that the mayor lived next to the park and adored the birds. After he died in 1987, the U.S. Department of Agriculture’s Animal Damage Control unit tried to remove them, sparking a fight with Mayor Washington’s neighbors, who also loved the parakeets, and the establishment of the Harold Washington Memorial Parrot Defense Fund. The people were successful, and the parakeets remained, at one point numbering in the hundreds. The nests were impressive, dominating the small green square. I didn’t hear the birds at first, but as my eyes got used to the sight of the sticks, I could see spots of green and blue moving in and out of them. It was winter. It was cold, no, freezing. What were all these birds living on? Which brings us to the second reason Monk Parakeets survive so well in urban areas (and seemingly anywhere): their flexible eating habits. Their usual diet consists of berries, acorns, leaves, fruit, buds, etc. But, when these are not available in winter months, they will eat seed and grain. Again, not very fussy! They are commonly seen at backyard bird feeders in Chicago, according to Pruett-Jones, eating till the feeders are empty. This echoes their behavior in their native South America, where they are known as agricultural pests who will eat and destroy crops. In the 1970’s, they were responsible for the destruction of up to 45% of certain crops.**  The initial impetus for Pruett-Jones’ studies was to find out if the Chicago Monk Parakeets posed a threat to Illinois farmers. Even today, newspaper and magazine articles about the parakeets have headlines like this one, that ran in the Broward (FL) Sun-Sentinel on March 2, 2014: Monk Parakeets: Delightful Import or Pest?

Happily, there is absolutely no evidence, scientific or anecdotal, to support Monk Parakeets as agricultural pests in the United States. Nor, do they appear to be replacing or in conflict with other bird species, despite their reported monopolization of bird feeders. (I have not heard any reports of Monk Parakeets at bird feeders in New York City, or in New Jersey, where they have a colony in Edgewater, Bergen County.) They remain nuisances for local utility companies. And, for some people, a pain in the ear. A friend of mine lives in Chicago, near the University. She told me she originally was going to rent a beautiful apartment on the border of Washington Park. Till she heard the birds. “No way,” she exclaimed to me, when I said how wonderful it would be to live next door to the birds. “Those birds are loud! Squawking loud!” * Devlin, John C. A South American Bird is found thriving here. New York Times, Dec. 16, 1970, p.51. ProQuest Historical Newspapers, viewed July 17, 2014. Thanks to Stephen Baldwin, who found this article and wrote about it in his blog BrooklynParrots in the article Day of the Monk Parakeet: December 16, 1970, http://www.brooklynparrots.com/2013/08/day-of-monk-parakeet-december-16-1970.html.

How It's All Connected: Terns and Eels

Getting the Bill - Taste, Touch and Smell in Birds