In New York, as is the case across most of the area where the “eastern” wood-warblers migrate, there are four species that are almost always the first to appear. Palm Warblers, with their tail-pumping and low-foraging habits, tend to get much of the attention. The Louisiana Waterthrush announces itself with loud chip notes and a clear song. Yellow-rumped Warblers can’t be missed with their sheer numbers. Pine Warblers, despite the bright yellow plumage of the males, are probably paid the least attention of the four. They tend to forage rather high up, their song is similar to the Dark-eyed Juncos that haven’t left by the time that they arrive and to the Chipping Sparrows that arrive nearly simultaneously, and if Pine Warblers showed up a bit later in migration they would probably be completely ignored in favor of some of the showier species in their genus.

But, of course, Pine Warblers are an early migrant and therefore get lots of attention from birders starved for wood-warblers after a winter of deprivation. This is despite their being rather blah by wood-warbler standards with a trill for a song that could easily be mistaken for a bug (Pete Dunne, however, hears “great variation and improvisation”). In autumn, Pine Warblers are perhaps the most confusing of the confusing fall warblers, with some birds so bland that it is hard to believe that they are even wood-warblers and you can be forgiven upon seeing one for thinking that a cruel European, jealous of the sheer brilliance of our birds, has tried to sneak an Acrocephalus past you. With a large and increasing population spread over a wide area – it breeds across eastern Canada, the eastern United States, and into the Caribbean – BirdLife International considers the Pine Warbler a Species of Least Concern. In fact, its population has increased over 78% in the last forty years in North America, a remarkable increase!

All of the images in this post were taken over the last week with my digiscoping rig in New York and New Jersey. The bright yellow birds are males and the dull shots are of a cooperative female. We are at the height of Pine Warbler migration in the northeast right now and I have taken full advantage of it. Get out now to see your own Setophaga pinus and make sure to savor it because soon you will be overwhelmed by much brighter birds! 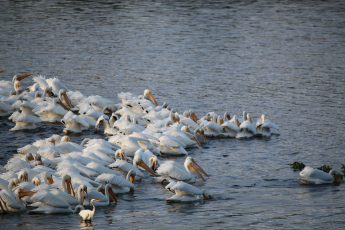 « Previous post
Are Introduced Snakes in Florida Learning to Eat Eggs?
Next post »
Best Bird of the Weekend (First of April 2012)