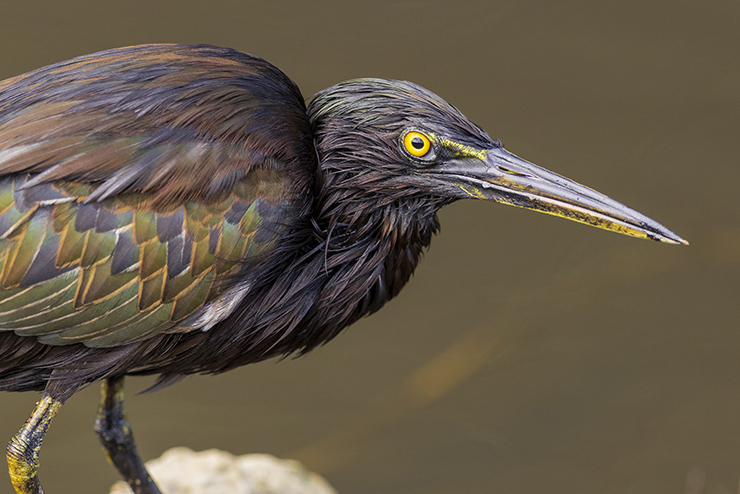 In my last post I alluded to several goings-on that warranted separate posts. Although much has happened from then to now, the memory of a bird we observed on that day has remained with me.

I had been tracking a Yellow-billed Cuckoo as it fed in the canopy when Joanne (my life and birding partner) drew my attention to an exceptionally dark heron hunting in a small waterway. I drifted closer, and sure enough, there at the water’s edge, was a small heron – almost black with blazing, fiery yellow eyes – fixated on some movement beneath the surface.

We watched this bird for quite some time. Undoubtedly its behaviour was that of a local Green Heron – it also briefly interacted with another, regular-looking Green Heron that flew in momentarily. But something was definitely different about its plumage. My initial thought was that it was an oiled bird; here in Tobago oil spills are infrequent, if not almost unheard of. But certainly not impossible!

Occasionally, it would fly from one bank to the other. Closer looks revealed a plumage I couldn’t have imagined even if I was deep into a hallucinogenic journey. I revisited my oiled theory.

Seeing that it was actively hunting and operating like an otherwise normal Green Heron, I opted to photograph it, research it and possibly return and continue observing the bird. When we got home, I reached out to the authors of this paper on polymorphism. Within a day, I received a response – most likely an oiled bird.

I felt terrible for ogling at its iridescent feathers instead of immediately jumping on the bird and dousing it with soap and water. But the more I look at the images is the more doubt I create within my own mind. I haven’t seen all the Butorides herons in the world, but I’ve never seen either a Green or Striated with scapular feathers like this one. Some blue with white edging, others green with copper edging. Even its plumes are coppery! Some white feathers are visible, but there seems to be some staining of sorts on its legs and bare parts.

All this being said, I revisited the area several times since and never laid eyes on it again. With what I had been told, I was prepared to at least attempt to capture it and wash it. Rest assured – I attended an oiled bird workshop some years ago so at least I have some idea of how to clean an oiled bird! But no luck. Did it move on to deeper within the mangrove? Was it washed in the heavy rains we had recently? Did it perish from ingesting toxic chemicals? Sadly, all I have is this pair of photographs.