Just Saturday, I was bemoaning the apparent end of the migratory season. The impression gleaned from a couple of hours at Tibbetts Brook Park was confirmed at Riverdale Park. The torrent of spring migrants passing through NYC has been reduced to a trickle or, at best, some intermittent spurts. But a Core Team excursion on Sunday proved that the birding fun is far from over around here.

Sara, the kids, and I made a move to Marshlands Conservancy in Rye for some Long Island Sound satisfaction. This magnificent public space receives far less traffic than it deserves, but that’s just fine with us. Loaded up with the fixings for a fine morning on the sound’s rocky shore as well as two solid toddlers, I was too burdened to carry the camera. This, as you probably guessed, was a tactical error I sorely regret. What else is new?

On the way in, a Marshlands naturalist alerted us to some Indigo Buntings along the trail and Ruddy Turnstones at the beach. As we traveled through the superb old-growth forest, other optics-toting types confirmed how fabulous those turnstones were. Even as I spotted a brilliant male Indigo Bunting in song, set off nicely by the stark scarlet of an adjacent cardinal, I was thinking about getting down to the water to see if the turnstones were actually still there.

Were they ever! I’ve never enjoyed such exceptional views of this striking shorebird. Stenciled in broad, strong strokes of black on fields of vivid rust and ivory, the Ruddy Turnstone in breeding plumage is one of the most arresting birds you’ll find at the shore. My great pleasure at encountering groups of 5 to 10 scattered along the water’s edge, foraging Horseshoe Crab eggs with admirable diligence, was tempered by my disappointment at leaving the camera behind. I’ll be lucky if I ever get looks as good as these.

I got over my despair when I realized that, though the turnstones were surely the most prevalent shorebirds on the beach, they weren’t the only species by any length. A variety of peeps milled about, dwarfed in both size and style by the ruddies. But the Short-billed Dowitchers, with their orange breasts, white eyebrows, and preposterously elongated bills, made quite an impression. It’s been too long since I’ve seen dowitchers, so these sightings meant as much to me as the abundant turnstones.

The other prominent birds of the beach included Common Grackles, European Starlings, Herring Gulls, Red-winged Blackbirds, Mourning Doves, Mallards, Canada Geese, Mute Swans, Common Terns, and Double-crested Cormorants. Both Great and Snowy Egrets showed up, as did Yellow Warblers, Common Yellowthroats, and a mighty matched pair of soaring Ospreys. On the way out, I happened to catch a glimpse of one of the many singing Marsh Wrens. The woods and fields also held expected species like Tree Swallow, American Goldfinch, Tufted Titmouse, and, as always, Wild Turkey, one of which might have given up this fine feather we found: 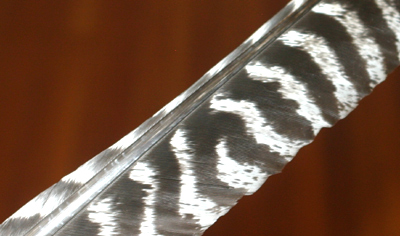