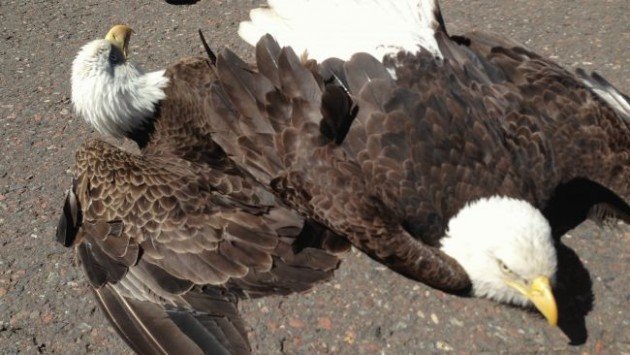 Well, that brings a new meaning to the phrase “the eagle has landed.” In the case of two Bald Eagles at the Duluth International Airport in Minnesota, the landing was of the not-so-smooth variety. The birds had locked their talons during a mid-air battle and plummeted to the tarmac together.

When they hit the ground, both were alive, but unable to separate themselves. Fortunately, a quick-thinking airport employee called the state’s Department of Natural Resources. (Randy Hanzal, a conservation officer with the agency, snapped the remarkable photo above.)

During transport to a rehab center, one eagle made a quick escape. The other was transferred to the University of Minnesota’s Raptor Center with deep talon wounds, but was expected to do well. (You can check for updates on its progress at the Center’s Facebook page.)

If You Talk to the Animals