The journey of a thousand miles or a thousand birds begins with a single step. Coming back from an excursion that felt like it covered at least that much distance, if not that many birds, my first thought is of the species that triggered our Adirondack odyssey. If you know anything about the specialty breeders of northern New York, you may have a clue as to the bird that brought Corey, Patrick, Will, and myself together in the state’s Capital Region. But that tale can wait until tomorrow. Suffice to say, four bird bloggers, or blogging birders if you prefer, convened for 24 ambitious hours of ardent avian observation. We warmed up with grassland birds of Montgomery and Schoharie Counties.

The bucolic counties west of Albany shelter a mix of species I usually associate with the prairies of the American heartland. Bobolinks and Savannah Sparrows buss and burble while furtive, ambiguous sparrows skulk in the tall grass. Our path, meticulously charted by Corey and Will, brought us into the heart of this rich kingdom of farms and field birds. One of our targets was Henslow’s Sparrow, a New York rarity that Patrick had never seen before. Our upstaters knew the exact tract of land favored by a particular Henslow’s, and within five minutes of pulling up, we had one singing in our scope.

Encouraged by our luck, we moved on in search of Grasshopper Sparrow and my particular quarry, Upland Sandpiper. Corey and Will had an auspicious spot for this peculiar shoreless shorebird. Wouldn’t you know it, just as we pulled up, a pair of sandpipers took to the air, traced wide, whistling circles, and then went to ground, leaving me one life bird the richer. Even better, on completing a second loop, we spotted one of the upland sands strutting on a closely-clipped lawn, offering the kind of views everyone should have of a new species.

Grasshopper Sparrow proved unexpectedly difficult to pin down, but in the process, we did encounter beauties like Eastern Meadowlark, Willow Flycatcher, Vesper Sparrow, American Kestrel, Northern Harrier, and four species of swallow. Our endurance was vindicated as our second Ammodramus sparrow of the day put on a brief, but memorable performance. Having swept the grasslands, we moved on to decidedly damper habitat.

Our Albany contingent knew of a marsh close to home that was not just productive, but prolific with Virginia Rail, Sora, and both American bitterns. We timed our arrival to coincide with sundown, when the rallid species should be in full throat. Too bad they didn’t get the memo. Although at least one Virginia Rail did rail at us, I didn’t get the looks I needed to add it to my life list. Adding insult to injury, the bitterns and sora remained impassive to our pleas. Still, we were able to add Marsh Wren and Swamp Sparrow to our day list, which stood at a very healthy 43 or so. Then it was time to prepare for the next leg of our journey.

This thing that we do, bird watching, may end at the eyes, but it requires way more than keen eyesight. Pulling up to a tract of grassland superficially similar to the 600 square miles of fields around it in the middle of a desolate rural county in order to locate a sparrow superficially similar to the thousands of little brown jobs around it and nailing it within minutes is the culmination of countless hours of research and field study. The phenomenal accumulation of expertise, insight, and sheer endurance of the naturalists I had thrown in with on this adventure was humbling to say the least. This gave me a pretty good feeling about the Adirondack expedition to come…

Be sure to read what Patrick, Will, and Corey, that last particularly pleasing to poetry lovers, had to say about the day’s events. 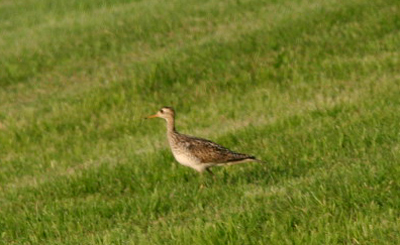