The reputation of birding as an inexpensive avocation is somewhat misleading.  While it’s true that birds in the wild can be looked at for free, finding them can cost a pretty penny. Birding here in New York City suffers from the same cost-of-living increases as every other activity. Yesterday morning was a perfect example of this point. Corey and I made plans to meet early at Central Park to stalk the Connecticut Warbler that popped up recently. On your usual Sunday morning, I can walk out of my house and be parked on the street fairly close to the Naturalist’s Gate at W.77th (fitting, no?) within 15-20 minutes. Of course, your usual Sunday morning doesn’t include thousands of runners raising funds for breast cancer. It seems the Race for the Cure had the West Side on lockdown, which cost me a highly unreasonable amount of time and money in parking.

To add insult to injury, the birds just weren’t that good. Perhaps we’re a bit early for full-blown fall migration or perhaps the cavalcade of the compassionate intimidated migrant avifauna. In any case, the warbler distribution was surprisingly sparse. Magnolia and Black-and-white Warblers appeared in excellent numbers, surprising in the case of the former but expected of the latter. American Redstarts represented as well; while most of these fetching fantails were female, a couple of brilliant jet and vermilion males put the ‘red’ in redstart. Those species, along with Common Yellowthroat and Black-throated Blue do not a fallout make.

Central Park does have plenty of other birds to offer from Black-crowned Night Herons to Downy Woodpeckers, but what we’re talking about here are seasonal commons. You can always find starlings and pigeons and grackles and House Sparrows. In addition, you can always find thrushes. The genus Turdus dominates the five boroughs through the unreasonable adaptability and resilience of Turdus migratorius, the American Robin.  However, Central Park does well by Catharus thrushes as well. Hermit Thrushes are numerous in colder months and waves of Gray-cheeked and Swainson’s come through during migration. The current catharid appears to be Veery. Corey and I found ourselves surrounded by a coven of these shimmering cinnamon thrushes. Because they were so abundant and stuck to the shadows, we automatically assumed the bird below was a Veery, but that black-tipped beak has me questioning that call. It’s probably a Bicknell’s, which means I could have avoided that grueling climb in the Adirondacks this past June… 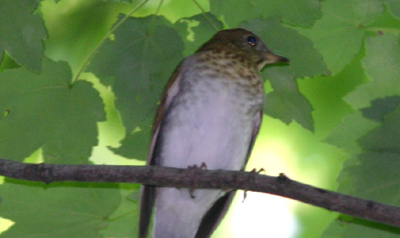 Is it a Veery?