This has been a banner year for me as far as vireos are concerned. Though I’m always on the alert for new birds, I unintentionally backed into a new personal milestone. I was so fixated on warblers during May’s migratory festivities that I didn’t realize until June that I’d spotted every species of vireo expected in northeastern North America. Actually, with the inclusion of our Thick-billed Vireo sighting in the Bahamas in January, I’ve actually seen every vireo of the eastern U.S. this year except one, the highly localized Black-whiskered Vireo of south Florida and the West Indies. Further incentive for a trip to the Florida Keys, as if I needed any.

Vireos are New World passerines in the family Vireonidae. Though that family is divided into four genera, all U.S. vireos are of the genus Vireo. Most vireo species are native to Mexico, Central and South America and tend to be non-migratory. Our local breeders all buck those trends but do share a primarily insectivorous diet with their homebody kin. Superficially similar to wood warblers, vireos are distinctive for their more mellow behavior and less flashy plumage. Drabness seems to define these birds; their name itself descends from the Latin for “green” or “greenish” but the folks that came up with that appellation certainly weren’t thinking chartreuse or lime. However, it’s not the subdued coloration of vireos that makes them tough to spot, but rather their tendency to keep to the tops of trees. Were it not for their complex and distinctive songs, many vireos might go entirely unnoticed.

Considering how challenging these cryptic, canopy-hugging birds are to come by, you’d be right to wonder how a birder of my limited expertise managed to record the whole roster last month. Hey, I’m not proud. I’m happy to admit that, while I sought out some, I stumbled upon others and wouldn’t even have been able to ID certain species without help, whether online or on-location. Still, a bird on your list is worth two in the bush and to celebrate the addition of some of the following to mine (list, not bush), I’ve uncovered a fun fact about each vireo of the American Northeast. 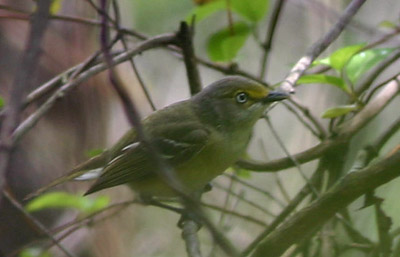 How Many Birds Are In This Picture?