If you live on any decent-sized landmass anywhere in the Northern Hemisphere, chances are waxwings occasionally wing your way. Waxwings are dapper passerine birds that breed in northern forests and winter where ever they please. Birds of the genus Bombycilla are primarily frugivorous, sometimes to excess, but will happily feast on flying insects in summer.

Waxwings take avian aesthetics to a whole new level. That roguish black bandit’s mask, velvety plumage, insouciant crest, and vividly colored tail tip put other birds to shame. Frankly, if there’s a sleeker species, I haven’t seen it. In fact, the genus name, Bombycilla, is a Latin translation of the Swedish name, Sidensvans, which means “silk-tail.” The question, though, is whether there is substance to at least some of this style. What of the trait that sets this fashionable frugivore apart, the feature for which it is named? What puts the wax in the waxwing, and why?

Waxwings are distinguished by odd, waxy appendages on the tips of their secondary feathers. These bright red drops are actually flattened extensions of the feather shafts colored by astaxanthin, a carotenoid pigment. Waxwings are not dimorphic; both males and females wear wax on their wings, with the number of tips in both sexes correlating positively to maturity. The purpose of these waxy tips eluded ornithologists for a long time, but a 1987 study by D. James Mountjoy and Raleigh J. Robertson of Queen’s University in Kingston, Ontario provides the most plausible explanation.

Mountjoy and Robertson analyzed the distribution of secondary tips among the different sex and age classes of Cedar Waxwings. They also investigated the possibility of differences in relative success at obtaining mates or opportunities to breed for birds with or without a full complement of tips, comparing breeding success and other reproductive parameters for young and old birds. This research supported the biologists’ hypothesis of “assortative mating” which essentially means that the birds match and mate according to age. Most observed mated pairs were composed of two birds belonging to the same tip index category, where the number of tips correlates closely with age. Young birds pair up with other members of their peer group while the older birds mate within their own circle. So why do waxwings wear wax on their wings? To take the guesswork out of dating! This wax is pretty wise.

Some authorities lump the Middle East’s Grey Hypocolius and silky-flycatchers like the Phainopepla in the family Bombycillidae, while others consider waxwings in a class by themselves. For now, we recognize only three waxwing species: 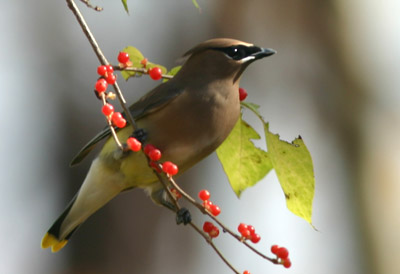