After nearly 8 weeks here in New Zealand, the sun is setting on our visit. This amazing group of islands, is without a doubt, enchanting and beautiful. The local New Zealand people, across the board have been the most hospitable, welcoming folks I have ever met. And their birds, are, well simply amazing. To use the word unique, just seems to understated. There is no way I can have a discussion about New Zealand, the country and its birds, without giving a huge nod to the effort put out, to both save what they have and restore what they are close to losing. Tuesday afternoon, we will land in Melbourne, Australia, and the second leg of this amazing journey will begin, but New Zealand, fear not, for we will be back!

In closing out our visit here, we are ending out time in Auckland. While it would seem to be just another big city, for that would be the observation from someone who either was just quickly driving thru on Highway #1, or did not spend any time getting to know about the history, and meet the people. With my extensive sailing history, a visit to the downtown area, and the Maritime museum with its America’s Cup background was a requirement. We did the Kelly Tarleton Aquarium, and even rode up to the top of the Skytower! But the biggest impression I got from the Auckland area, came from near by Tiritiri Matangi Island. In the 80’s this island was almost 100% cleared of all vegetation, and was all pasture lands, before it was set aside as a reserve. All predators, native and otherwise have been removed. Hundreds of thousands of native plants were re-planted, and native and endemic species have been reestablished. It now stands as a remarkable tribute to conservation efforts thru out this country, to preserve the natural beauty and wildlife that is New Zealand.

Big thanks to my wife, Jeanne, for remembering to get this island photo for me. I was so excited looking at birds, I totally forgot. 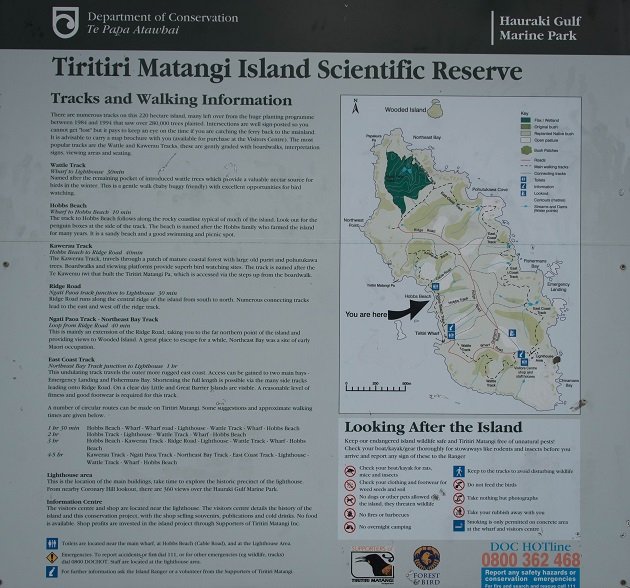 Jeanne and I were joined by our great local friends, Glenda and her son Tim on the once a day ferry out to the islands, at 9:45, and caught the return trip at 3:30, giving us 5 hours to explore the area, and enjoy the incredible bird life that is Tiritiri! Before we were even off the ferry, the birds calls that emanated from the island was truly amazing. There were three or four birds that despite all my efforts, have remained elusive, and Tiritiri was my last hope.  I planned on making the most of it. Rushing out ahead of the crowd getting off the ferry, I told my wife where I was heading and would wait there for her. By the time I got to the top of the first real hill portion of the island, bird #1, the Stitchbird, was checked off. This male Stitchbird, is sell adorned with bands, as are many of the more unusual birds here on Tiritiri. 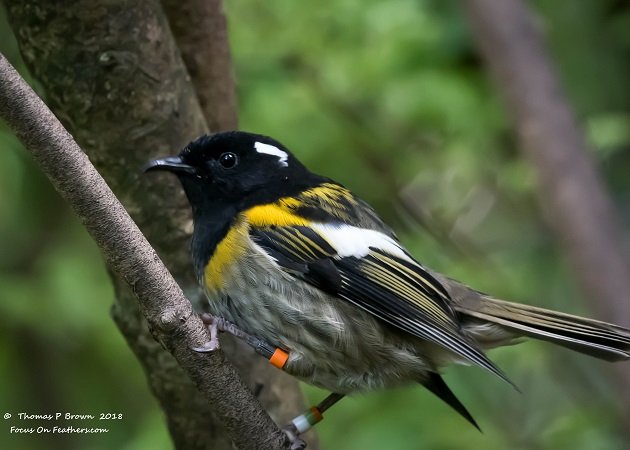 Jeanne caught up and the rest of the search was on. Bellbirds were everywhere, and at one of the feeders put out by the island staff, there was dozens at a time, calling, taunting and rushing in to feed.

Tuis, and New Zealand Wood Pigeons seemed to be in very tree top, and more and more Stitchbirds showed up, everywhere I went. Walking the well maintained trails and boardwalks, North Island Robins, Gerygones, and North Island Saddlebacks fluttered back and forth constantly. Brown Quail, feeding on the gravel paths, seemed to not have a care in the world that there were dozens of people walking by. 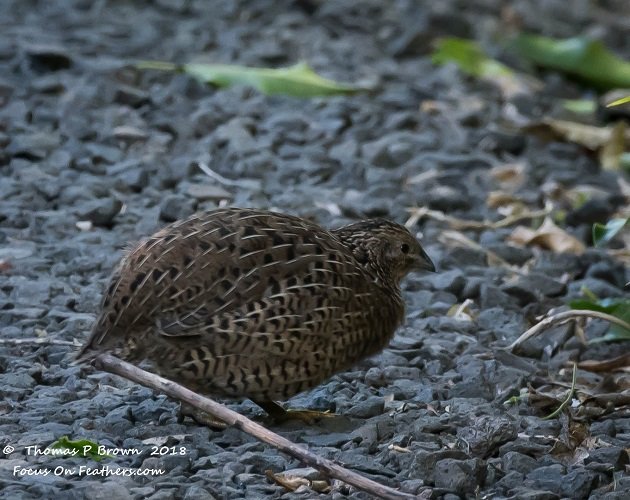 At a very dark, low part of a small valley, we found a dozen or so Whiteheads, and I made a every possible effort to finally get a photo or two. Shooting at 10,000 ISO, and F13 got me about 1/30 of a second, so I really needed one of these hyperactive birds’ to sit still for just a bit. This one finally helped me out a bit.

We were covering as much area as possible, with help from the local volunteers, trying to find the tiny little Rifleman, and the hard to spot Fernbirds. In the end, they just did not make an appearance, Reports came from several parts of the park, with spotting’s, but they just never present there when we were.

The last bird on my wish list was a real tough one. The very rare endemic, and endangered bird, the North Island Kokako. The Crow sized bird, is a light gray, with blue waddles under its bill. Knowing that we had run out of time, and needed to make it back for the 3:30 ferry, we headed back that way, on the appropriately named “Waddle” trail. The first nice find was a small group of Red-crowned Parakeet, right near the trail. More Bellbirds, Tui’s, an Australian Magpie, even a White-fronted Heron all showed up, but it looked like the day would end without the three birds on my wish list. Then, all of the sudden, right above our heads, was a beautiful big Kokako. Considering the size of this bird, it moved thru the limbs like a warbler on espresso. Many photos were taken, some good, many bad, but I did come away with a few pretty good ones. One of which is below. 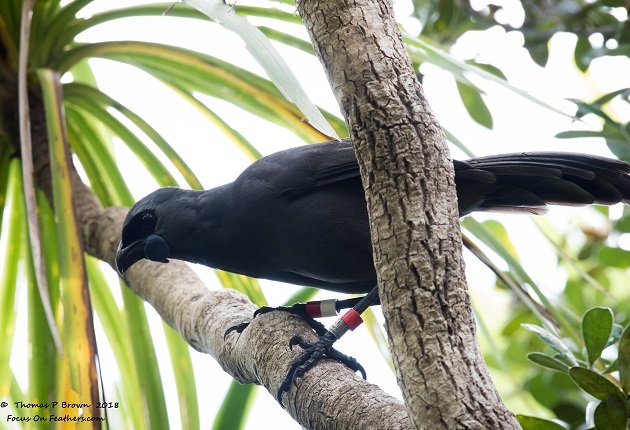 This is the Red-crowned Parakeet that was near the trail, just before the Kokako. 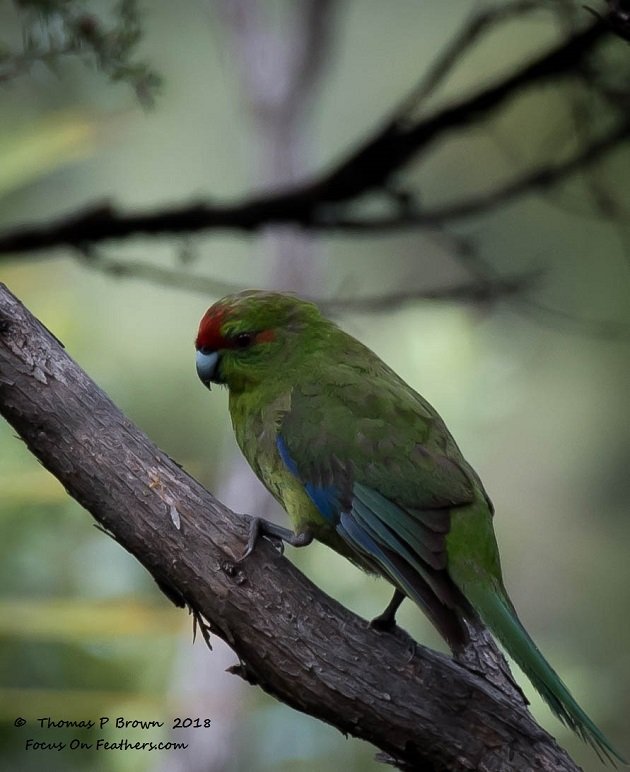 Here is that Australian Magpie, helping to keep the crickets in check. 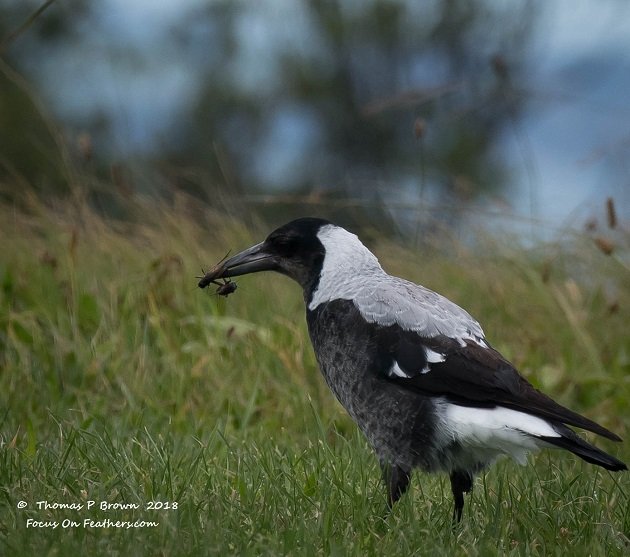 This is one of the many North Island Robins that came to visit us as we walked the many paths. 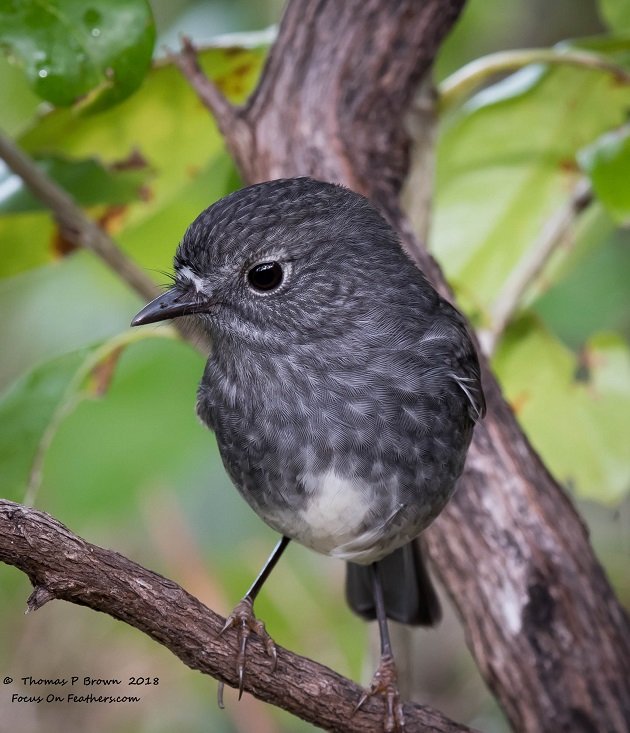 The final numbers for New Zealand are as follows:
104 Total species
93 New Lifers

The running numbers for the year are:
298 Species for the Little Big Year
107 eBird Checklists for 2018