We are wrapping up our last week in the great state of Oregon, and made visits to many of the old haunts of my childhood. Two full days at Hart Mountain Wildlife Refuge, three days at Dog Lake, and a short visit to Upper Cottonwood Lake brought back many great memories, in addition to a nice list of birds. Then, to finish the week, we visited the famous, and not necessarily for all the right reasons, Malhuer Wildlife Refuge.

The first part of the week, we parked the RV at a campground right on the water, of Dog Lake, 20 miles southwest of Lakeview, Oregon. The area had been ravaged by a forest fire a couple of years before, and was finally starting to show some signs of recovery. There were not as nearly many birds around the area as in past visits, but the number of species that were using the water as either a summer home, or just passing thru in the early parts of their migration made the visit well worth it. Western Grebes, Clark’s Grebes, Wood Ducks, American White Pelicans, and a few Short-billed Dowitchers made up some of the highlights.

There was a large population of Western Grebes on the lake. 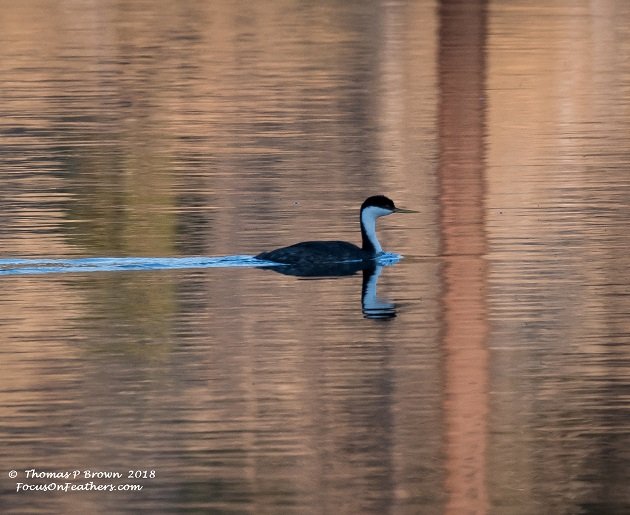 I only ran across this one Clark’s Grebe mixed in with in the groups of Westerns. 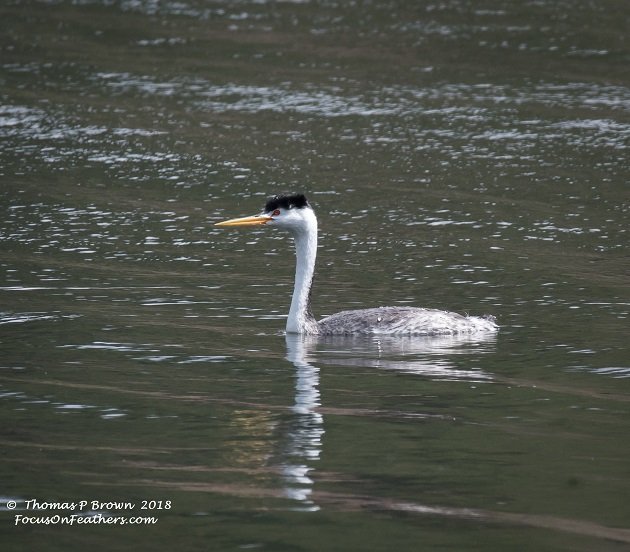 In our camp site, we discovered this Red-bellied Sapsucker that for the most part, was living in the tree right next to our 5th wheel. The entire time we were there, it really never moved much, and was never really to concerned about our being there. It might move around to the other side of the tree if we were causing to much of a disturbance, but usually, it just sat there. 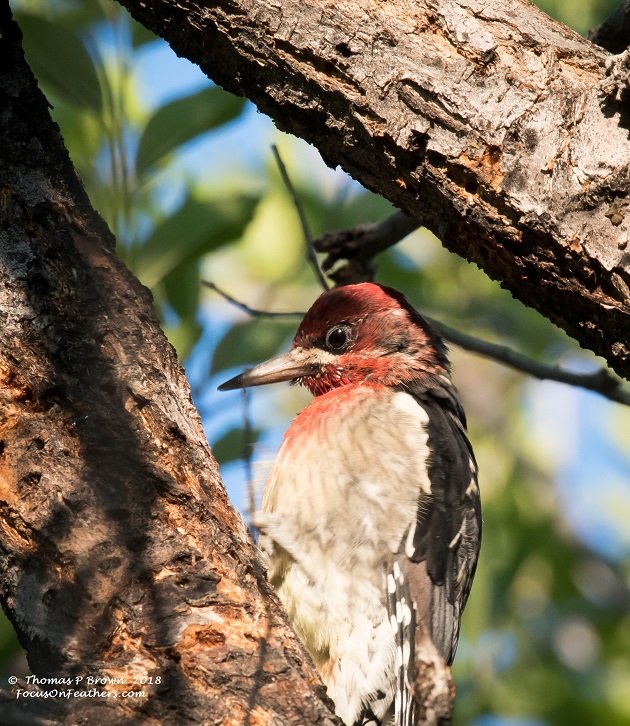 This Northern (Red Shafted) Flicker came to the lake every evening for a drink. 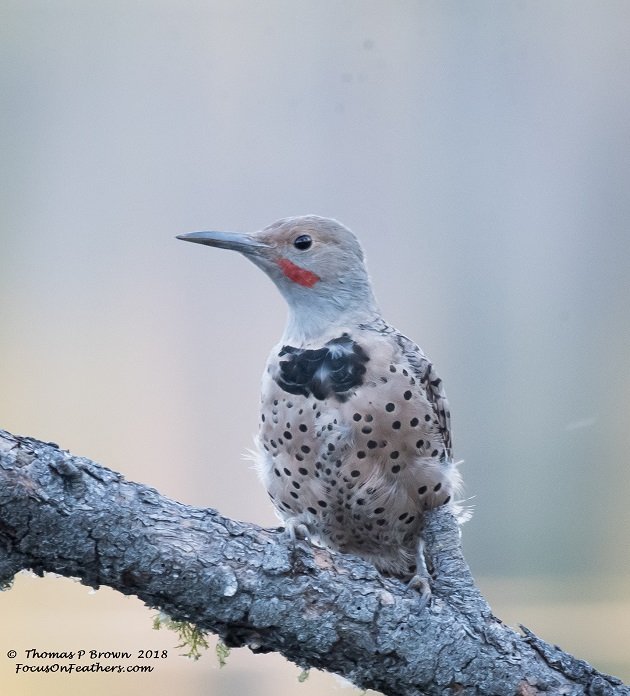 A quick stop over at Upper Cottonwood Lake added a new Lifer to my list, in the form of a pair of Townsend’s Solitaire’s. 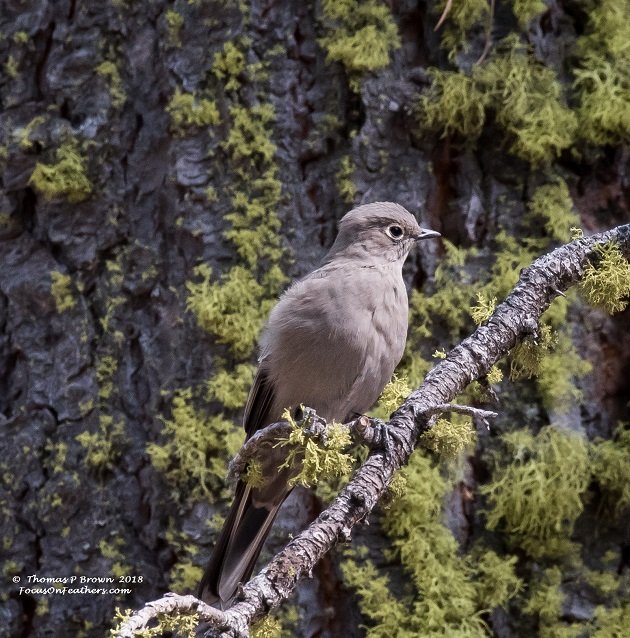 Mid week, we up and moved the camp to the base of Hart Mountain National Antelope Refuge, about 60 miles northeast of Lakeview. Jeanne had never been up on the mountain before, so I was quite excited to show her around. We would liked to have been able to camp in one of the sites up on the mountain, especially at the Hot Springs campground, but the long winding round up, with its 8-10 % grade gravel road was just more than we were comfortable with. So, we made the 10 mile run up in the truck each morning before daylight, in order to get a jump on the birds and other wildlife.

Greater Sage Grouse are always on the top of my target list whenever I am heading to Hart Mountain. This year they did not disappoint, as the first morning we sighted 17 birds in two groups. 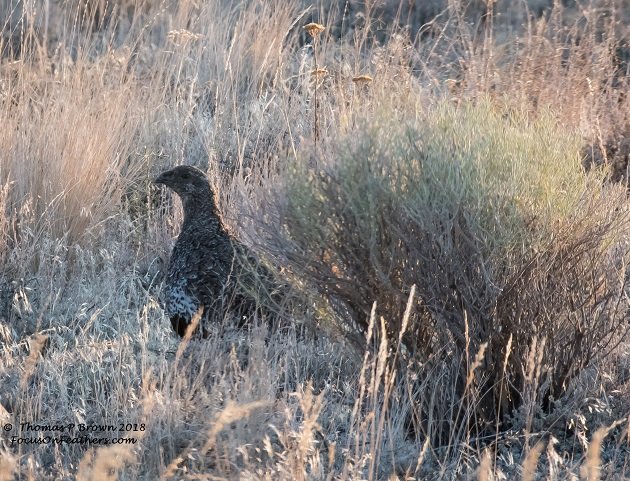 Along the creek at the Hot Springs Campground area, we found White-crowned, Sagebrush, Savannah and Chipping Sparrows, along with Western Wood Pewees, Dusky Flycatchers, Spotted Towhees, Green-tailed Towhees, Sage Thrashers, Warbling Vireos, House Wrens, Orange-crowned Warblers, and a Black-throated Gray Warbler. The biggest surprise of the day was this young Chestnut-sided Warbler. This is not only a new Lifer, but an exceptionally rare bird for this area. 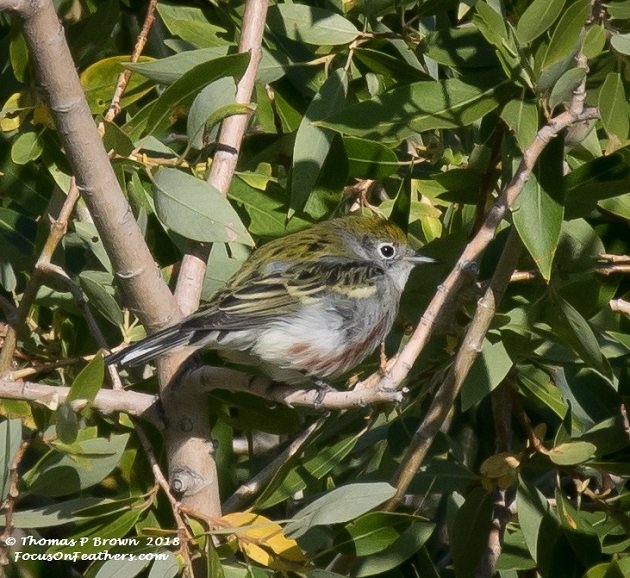 There were several Warbling Vireos that were working up and down the willows along the creek. 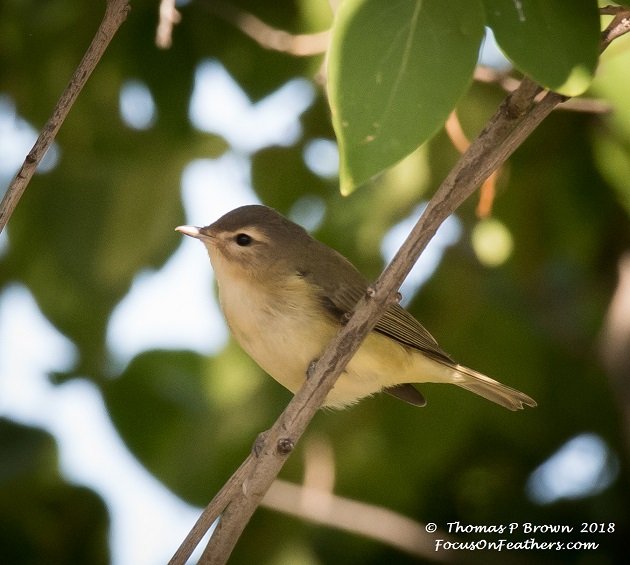 Now it was time to travel farther north towards Malhuer National Wildlife Refuge. At this point I have no real desire to debate the political issues that have surrounded this amazing area, as it is just not my strength or interest. There are some real deep seated beliefs on both sides of the issue, but I think I will just stick with the birds!
While I grew up not really all that far away from this area, we just never travelled that far, as we would have to go right by so many other incredible birding hotspots to get there. This visit marked only the second time I had been there, and the first was a half day visit back in high school. I had some pretty strong ideas in my head of what we would find once we arrived, and everything I was expecting, was so completely wrong. Along the way to Malhuer, we drove past Abert Lake, a long thin very strong alkaline lake that serves as a stopover for many migrant waterfowl thru the winter. The alkalinity is so high, other than a healthy population of brine shrimp, nothing will grow in it. The other up side, is that it virtually will never freeze over, so it is a dependable area of refuge. The north end of Abert Lake had close to 10,000 ducks and geese on it, so you can imagine how excited I was to get to Malhuer! Upon arrival to Malhuer, my first shock came, when we found mile after mile of refuge property, and not a drop of water. All the swampy areas, the flooded fields full of waterfowl that I was expecting, just did not exist. The list of ponds, and viewing areas I planned to visit, looked like they had not seen water in quite some time. What at first I thought to be a real disappointment, actually turned into an amazing couple of days of birding. With a tip of the hat to Loree, in the Refuge headquarters store, who helped put me on several great birds, my time there turned out to completely different than what I had expected, but better in so many ways. With a lack of waterfowl, I found four different owls, with Great Horned, Barn, Short-eared, and Burrowing all in the first 24 hours.

There are two “resident” Great Horned Owls right at the refuge headquarters who never failed to make an appearance each day. 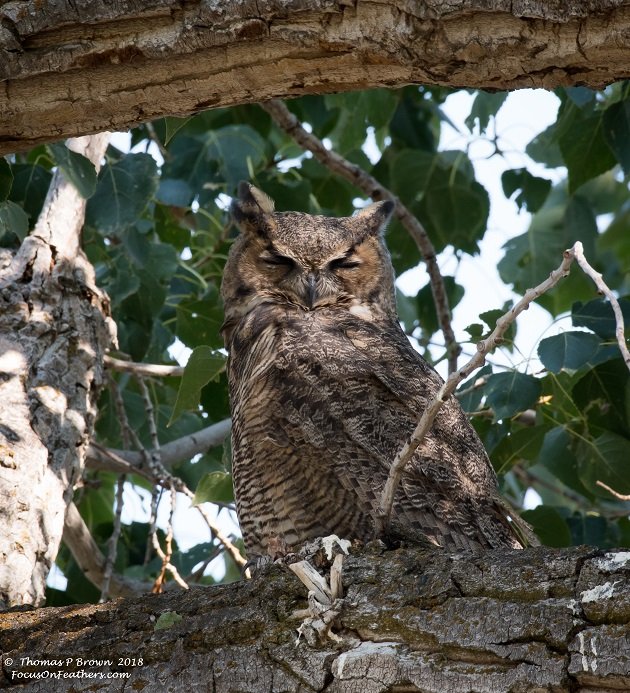 My second morning at the headquarters, one of these beautiful owls swooped right over my head, in an effort to snag a small Cottontail Rabbit that was nibbling on the lawn. The bunny got away. 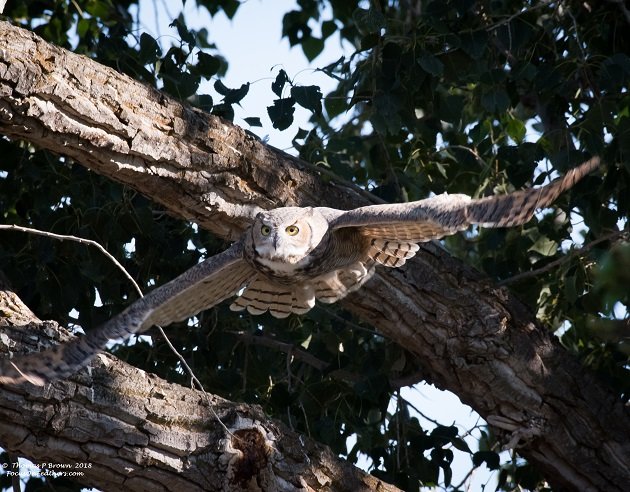 We actually saw a pair of these Barn Owls, but until this one landed in the willow trees close by, never were able to get a picture. 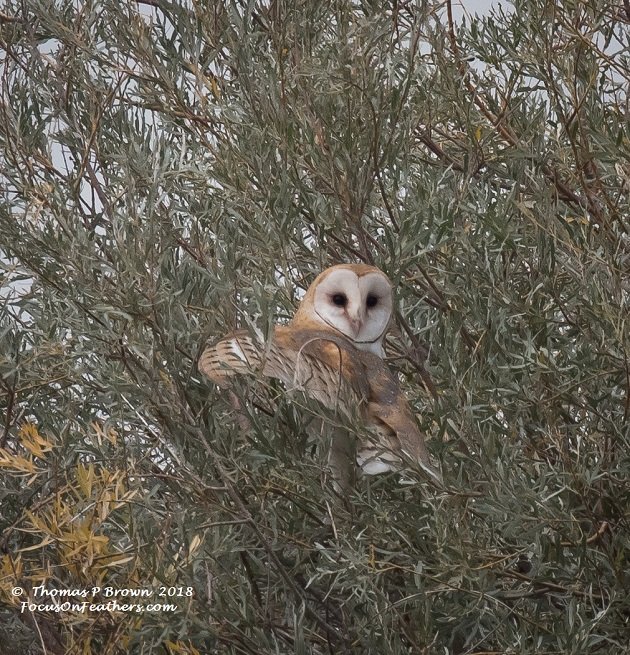 The Short-eared Owls escaped my camera twice, but the small community of Burrowing Owls, while never giving me that iconic, standing on the fence post shot, did quite patiently put up with my attempts to get a good picture. 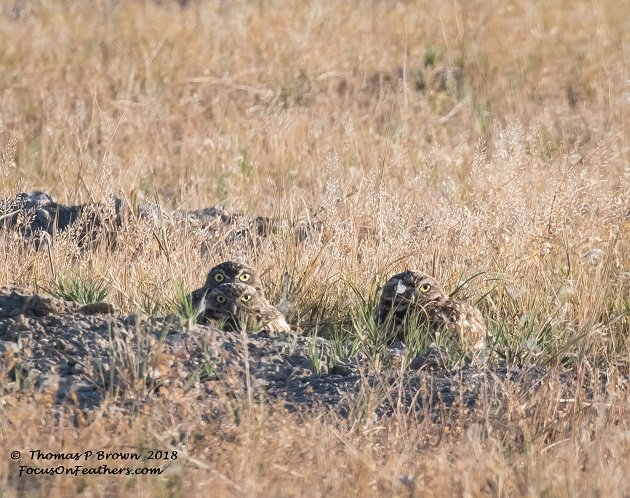 In addition to Calliope, Black-chinned, and Rufus Hummingbirds all hanging around the grounds of the refuge headquarters, I spotted Red-crowned Kinglets, Gold-crowned Kinglets, Warbling, Yellow, Orange-crowned and Townsends Warblers. A nice surprise came in the form of a Yellow-breasted Chat. 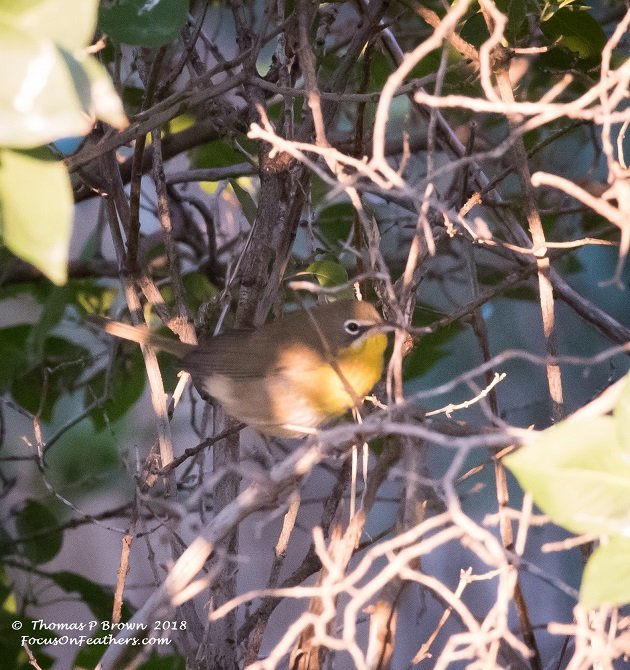 There was an apple tree that was just getting a good crop of ripe apples, and saw a nice bunch of visitors. American Robins, Spotted Towhees, Yellow-headed Blackbirds, Brewer’s Blackbirds and Western Tanagers like the bird below all were regulars at the apple tree. 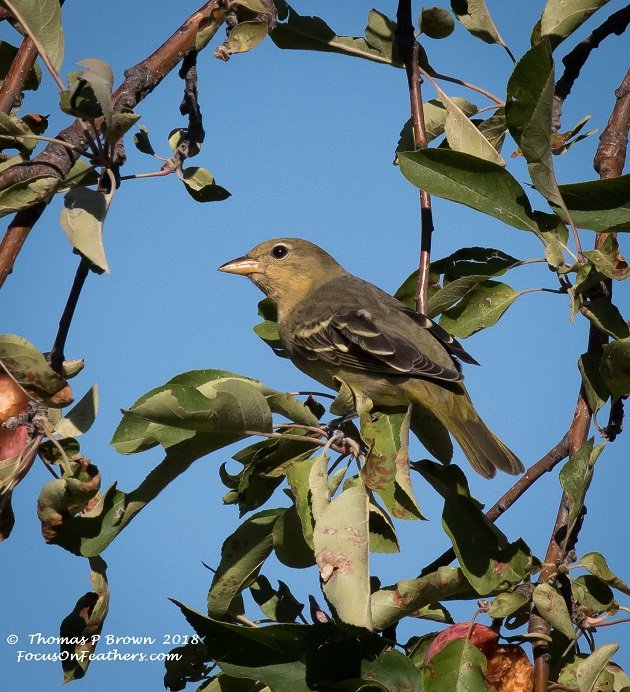 My second Lifer came the next day when a pair of Lewis Woodpeckers not only flew over head, but even made a couple of quick trips to the apple tree. I was never able to capture these rare woodpeckers’ eating apples, but did manage to get this tree top picture. 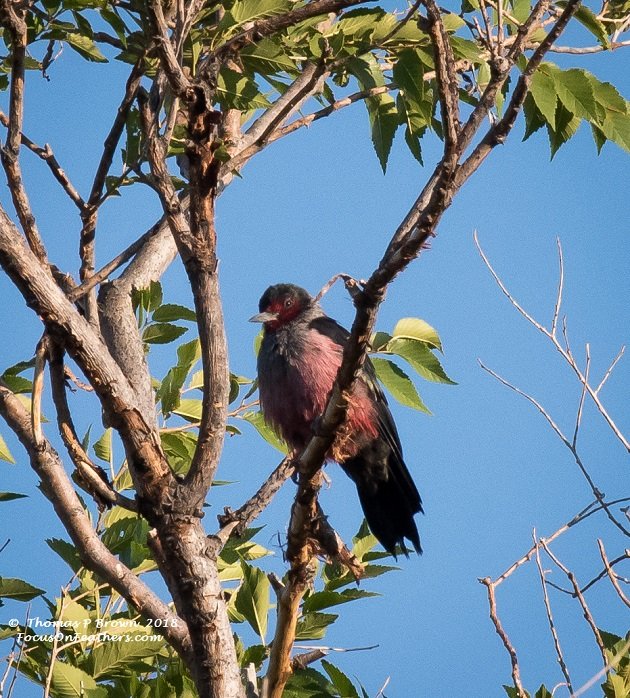 With all these small birds around the headquarters, it was no surprise to see an American Kestrel hanging around in the trees. Interestingly enough, every time it would land, the Black-billed Magpies were right there to harass it. This shot was taken just as it was driven away for the 5th or 6th time. 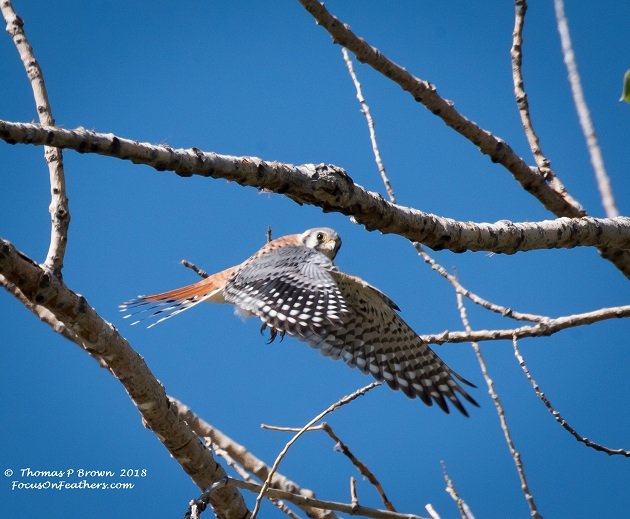 Next week we will continue north towards Idaho, and the Grand Teton area, and then finish the week in Yellowstone National Park.

This week ends with the Little Big Years numbers as follows: