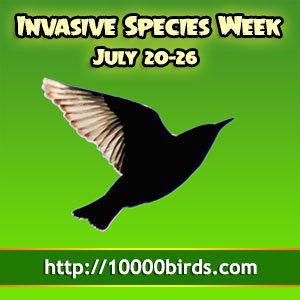 This is not the week for a xenophobic birder. Here at 10,000 Birds we are going to dedicate the coming week, from today until Saturday, to invasive species. We plan to use the broadest possible definition of invasive species, including species that are expanding under their own power and even species that are not, to the best of our knowledge, causing harm to species native in the range into which the invaders are expanding.

But why are we covering invasive species at all? One reason is that the topic is broad and fascinating. As organisms move into ecosystems where they haven’t occurred it is very difficult to figure out what will happen in advance. Will native species suffer? Will the invader prosper? Will there be cascading effects from either of those outcomes? The dynamic nature of invasive species makes them a subject worthy of examining from a multitude of angles and that is what we are going to do during Invasive Species Week.

We will have posts covering invasive species across a wide geographical range, from New Zealand to North America. We will cover mammals, plants, and, of course, birds. The sheer number of invasive species over the last several hundred years means that we can’t hope to be exhaustive in our coverage but I think we will have a nice survey of different topics.

As it says in our Invasive Species Week footer, batten down the hatches, strap on your helmet, and prepare to be invaded! This is going to be a heck of a ride!