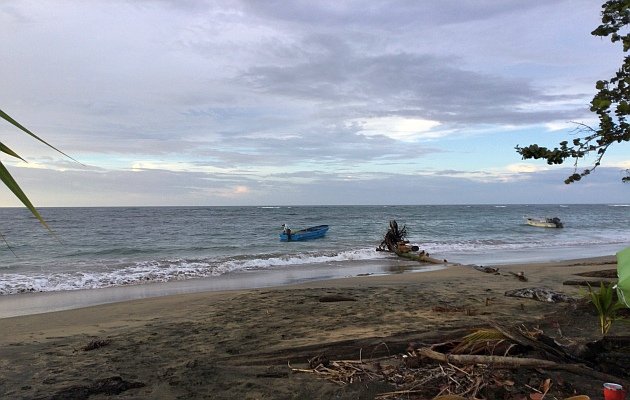 Another October Big Day has come and gone and thus made its way into the sacred birding archives. Similar to 2020, more than 32,000 people participated, 78,000 checklists were submitted, and more than 7,200 bird species were identified. Nothing like getting as many people to bird at the same time as possible and see what they find! It shows how many people are into watching birds, how many use eBird, and the incredible wealth of bird life found on our one and only home planet.

On other GBDs, I have done multi-hour Big Days that pushed the limits of concentration, endurance, and coffee drinking skills. For the past two years, pandemic nighttime driving restrictions have put a curb on such wacky birding efforts but it hasn’t completely stopped my Big Day birding shenanigans. For the most recent October GBD, my partner and I made a last minute choice to celebrate the special date in the southern Caribbean zone. As with other visits to the village of Manzanillo, we had some fine birding highlighted by a mix of migration and resident rainforest birds. Here’s some of what I learned and was reminded of from an October 9th of birds in Costa Rica:

The birding keeps on a happening. Even with driving restrictions, a lot of birders spent at least some of the day watching birds, birders in somewhere around 190 nations (!). In Costa Rica, despite there seeming to be less enthusiasm than previous GBDs, enough local and visiting birders dedicated most of the day to binocular use to give us a fantastic total of 731 species! This is an excellent total of bird species identified in Costa Rica for one calendar day.

The Number of Birders in Costa Rica Keeps Growing

No doubt, a big part of those impressive numbers from Costa Rica stem from having a lot more birders in the field. In Costa Rica, the hobby of birding and bird photography has been steadily growing for the past 6 years, much of it perhaps related to the availability of digital cameras. Topping 730 species was a reminder of this and it doesn’t just make me happy to know that more people are noticing birds. It also gives me hope for a more sustainable future.

Knowledge of Bird Distribution in Costa Rica Keeps Getting Better

The high number of species found was also a reminder of the extent to which knowledge of bird distribution in Costa Rica has improved. Thanks to such resources as eBird and Xeno-Canto, sharing of sightings on social media, and more birders better at field identification, there’s better information available about sites for more species, just about all of them.

That knowledge is in part certainly responsible for the fairly small percentage of possible species that were “missed” in Costa Rica on October 9, 2021. After a quick check of what was identified, the main species that were not found seem to have been rare and local birds typically tough to encounter. Since these birds have been seen on previous GBDs, with a bit more effort and less driving restrictions, I dare say they would have also made it onto the list. These missing birds were Masked Duck, Black-eared Wood-Quail, Tawny-faced Quail, Eurasian Collared-Dove, Rufous Nightjar, White-chinned Swift, a very few shorebird species, several pelagic birds (only because no pelagic trip was done off of Malpais), no Cocos Island species, Pinnated Bittern, Ocellated Crake, Black-and-white Hawk Eagle, Great Jacamar, Lanceolated Monklet, Slaty-backed Forest-Falcon, Spot-crowned Antvireo (one that we had hoped to find), Black-crowned Antpitta, Rufous-breasted Antthrush, Strong-billed Woodcreeper, and Silvery-throated Jay.

Hotel Quelitales and Vicinity is a Top Hotspot

Honestly, Costa Rica is so birdy for its size, the whole country is pretty much one big birding hotspot. Even so, some places stand out for the number and quality of birds on their premises. One such place in Hotel Quelitales. Located near the dripping cloud forests of Tapanti National Park, Quelitales boasts an excellent blend of hummingbirds, and middle elevation and edge species that will keep a birder smiling. On October GBD, 2021, a team from the lodge including birder and owner Jose Alvarez, identified 233 species by just birding at and near the lodge. Given that they barely changed elevations, this is a fantastic total and demonstrates the high standard of birding at this site.

Even though they saw a lot in a small area, the highest number of species found by an individual was 261 species identified by German Aguilar Vega, and the highest team total was 542 species collectively identified by the Jacanas Costa Rica, a group of more than 100 women birders who submitted lists from various parts of the country.

In Costa Rica, You Can See a Lot Just by Walking Around

It depends on where you go for a walk but if you take a birding stroll in Costa Rica, you’ll probably see a lot. After a day of walking in and near the village, we managed to find 123 species. Since our total also includes birding during an afternoon nap followed by meeting friends on the beach, it’s safe to say Manzanillo is a pretty birdy place. I look forward to going back to that special spot, hopefully well before the next Global Big Day.

Other things I may have learned and was reminded of on bird-filled October 9th were that Red-eyed Vireos do indeed pass through Costa Rica in the millions, the same goes for Bank, Barn, and Cliff Swallows, and that Eastern Kingbirds like to rest on soccer fields. I also remembered that birding is always great but feels even better when you go birding and know that thousands of other people are also out there connecting with birds on the same day, in so many other parts of the world.