My daughter and I were exploring our yard the other day, which presented the perfect opportunity to introduce her to one of the coolest, cuddliest caterpillars of all… The wonderful Woolly Bear Caterpillar (Pyrrharctia isabella) is a common sight once October rolls around in temperate regions of the United States east of the Mississippi. The wooly bear, known also as the woolly worm, fuzzy bear, banded woolly bear, and black-ended bear, is reputed to signal the severity of the coming winter to those who understand the riddle of its bands. This caterpillar is black on both ends with a middle band a birder could only describe as rufous.  Woolly bears overwinter under leaf litter in a sort of hibernation. Come spring, they eat lots of foliage in preparation for the big push to their adult phase. 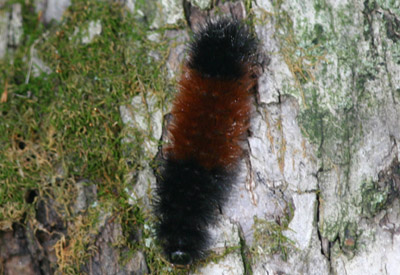 Superstition assures us that the amount of rich rust-colored fuzz adorning a particular fuzzy bear is inversely proportional to the length and intemperance of the season ahead. The broader the bear’s black bands, the worse the winter. Of course, reasonable folk realize that this caterpillar is no Cassandra at all. The breadth of a woolly bear’s bands tells us more about the previous season than the approaching one, as its rufous band narrows as the bug gets bigger, which happens when food is bountiful. Other factors such as age also affect the fuzz factor. A woolly bear won’t give you a clue regarding the coming cold.  What you might get instead, assuming the larva reaches maturity, is a lovely Isabella Tiger Moth. Most woolly bears are not as extravagantly tufted as other caterpillars can be, but this showy specimen spotted in Rocky Mountain National Park makes an admirable exception: