Bainbridge Island is just a short ferry ride across the Puget Sound from downtown Seattle. Though the island, considered the gateway to the Olympic Peninsula, boasts abundant historical and cultural charms, we were going for the birds. We learned through the Seattle Audubon Society chapter website of a terribly intriguing guided birding tour of Bainbridge Island’s fowl-rich waters.

Of course, Sara and I had to get there first. The weather was more than a little wet and windy, but we expected rain. We were in Seattle after all. Undaunted by the inclement weather, the Core Team met Linda, a wonderful woman who volunteered to acquaint us with the local avifauna, down at the ferry. We were very pleased to meet Linda, and not just because she picked out two life birds, Mew Gull and Pigeon Guillemot, for us on the way to the island. She happened to be a very interesting and thoughtful individual, well-versed in a variety of interests, as well as a heck of a birder. 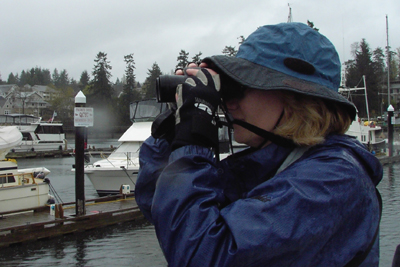 Though Linda was our birding escort for the day, if you will, she was not our guide. That honor went to George Gerdts, the leader of this circumnavigation of Bainbridge Island. George, a resident science teacher, ran a virtually perfect tour. Every detail was accounted for, every expectation exceeded. We thought we’d have to walk from the ferry to our boat; he arranged for a bus. We anticipated a rusty scow; he commissioned a very handsomely appointed, eminently seaworthy vessel. We dreaded a morning of lousy food and weak coffee; he provided delicious cookies and somewhat decent coffee. And how about those birds! Despite the driving wind and rain, George and his fellow guides, Jamie and Brad, manned the bow for the entire tour, expertly identifying just about every single thing in the water at the range of vision. Believe me, there was much to see.

The Puget Sound is an absolute treasure trove of grebes. Of North America’s seven species, we spotted four – Red-necked, Horned, Eared, and Western – in abundance. A fifth, Clark’s Grebe, was also possible, but if we encountered this Western Grebe look-alike, we didn’t realize it.

Cormorants are another specialty of the area. Even from the ferry port, Double-crested Cormorant were as common in Seattle’s waters as they are in New York’s. However, they were not alone. A multitude of Brandt’s and Pelagic Cormorant made their living on the sound. We were extremely fortunate that the cormorants were in breeding plumage. This made it child’s play to distinguish the Brandt’s, with its blue gular patch and whiskery white filoplumes, from the Pelagic, possessed of a white rump patch. 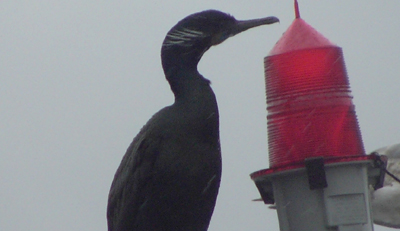 As we navigated the contours of the island, visiting places like Eagle Harbor, Blakeley Rock, Restoration Point, Rich Passage, Port Orchard, and Agate Passage, we encountered an absolute deluge of ducks. These weren’t just Mallard and Bufflehead either. We saw American Wigeon, though not its Eurasian relative, and large numbers of both Common Goldeneye and Barrow’s Goldeneye, the latter a lifer for us. The Core Team is scaupless no longer now that we’ve seen what we’ve been told were Greater Scaup. Another new duck for us was the exquisite Harlequin Duck, a waterfowl rarely spotted close to shore. Although this tour was not pelagic per se, it did place us right on top of tons of sea ducks. Along with the Harlequin, we saw Long-tailed Duck, Red-breasted Merganser, and all three scoter species, sometimes in huge rafts of mixed birds.

The birds I was most excited to see were the alcids. The Pigeon Guillemot, dapper in velvety black set off by ivory wing coverts and scarlet feet, appeared everywhere. Another bird that popped up at port or starboard with regularity was the remarkable Rhinoceros Auklet. Though drab from October to March, this bird, which is actually more closely related to puffins than auklets, sprouts a small white horn and feathery facial plumes during breeding season. The fact that we got close enough to the rhino auklets to spot their horns with the naked eye was one of the highlights of the trip. The third alcid of the journey came from one brief sighting of a Common Murre. Standing out in the rain with the guides lashed to the bow certainly paid off since we wouldn’t have made this murre had we been inside.

A roundup of waterfowl must acknowledge the loons and geese of the tour. We are very new to loons, having spotted our first ones only a few weeks ago. The Common Loon we saw then were sweet because they were new. The ones from this trip might have been even better, as some were decked out in sleek breeding plumage. If clothes really do make the man, it goes double for birds. The transition in loons from unremarkable to unforgettable stems entirely from breeding plumage. Our newest loon is the Pacific Loon, of which we saw many. Our geese were Canada Goose and Brant, the latter being of the black or intermediate subspecies of Branta bernicla.

Although shorebirds were difficult to spot most of the time, we did swing close enough to one stretch of beach to view hundreds of Black Turnstone, Surfbird, Sanderling, and Dunlin. The only other wader we spied was a Great Blue Heron in flight. The gulls included but probably weren’t limited to Glaucous-winged, Mew, Herring, and Ring-billed Gull. A bunch of Bald Eagle and one frantic Merlin made up the raptors and American Crow represented the corvids. The final species of note was another life bird for us, the Band-tailed Pigeon. I regret to say that we didn’t get as good a look at this local dove as we’d have liked, but we’ll take it anyway.

All in all, the trip to Bainbridge Island was a phenomenal experience despite the bone-chilling rain. We were thrilled to meet both the new birds and the birders, especially Linda and George. This tour will undoubtedly stand out as one of our favorite birding excursions. 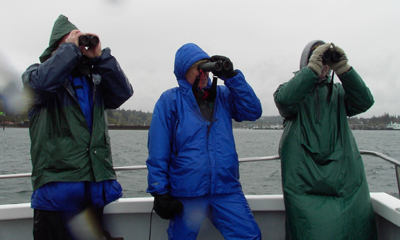