Sara and I awoke to a gray, drizzling Easter morning determined to cram as much sightseeing as possible in our final full day in Seattle. The first order of business, after breakfast of course, was our traditional Easter morning hike. Since we were prudent enough to visit Mt. Rainier, our original hiking destination, a couple of days earlier, we chose to remain within the city limits. This decision was not informed simply by laziness, but was a homage to last year’s Easter hike through Central Park just before we brought Mason home from the hospital.

I’m sure that there is no better park in Seattle for a brief hike than Discovery Park. With its thick forest groves and contoured landscape, the park seems in some spots positively primeval. Add to that a rugged coastline with commanding cliff-top views of the Puget Sound and you’ve got the kind of park that can make a man forget he’s in a city. 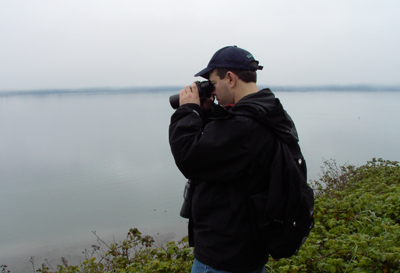 The birding at Discovery Park was not as fabulous as the terrain. We walked the Loop Trail, joined by hundreds of joggers and dog walkers. Suffice to say, the human activity on the trails had a deleterious effect of the avian activity along it. Of course, song sparrows were not intimidated by the noise, nor were starlings or rock pigeons. A number of Spotted Towhee popped up, our first for the trip. We also saw more juncos, kinglets, flickers, and siskin. We failed to identify one speedy little hummingbird and an Empidonax flycatcher, but we didn’t leave the park without a discovery of our own. You see, since our arrival, we were tantalized by the thought of different types of chickadees. In most of the Northeast, we must be satisfied with just the Black-capped Chickadee, which is usually bird enough to satisfy anyone. But Washington is home to four different species, three of which were new to us and all of which we had a shot at. At the point where both our trip and our circuit of the park were drawing to a close, we came upon a stand of conifers abuzz with familiar calls. At last, amidst a flock of its black-capped cousins, we spotted our first Chestnut-backed Chickadee, a tiny bird with rich brown plumage and tons of character.

After Discovery Park, we drove through the city from neighborhood to neighborhood, trying to see it all. With so much yet to do, something had to give. This time, it was birding. We stopped at Greenwood Lake and saw flocks of American Widgeon, American Coot, purebreed and hybrid mallards, and one ugly Muscovy Duck. We also picked up our final lifer of the trip, the Brewer’s Blackbird. This, one of the least remarkable looking of the icterids, is known as a parking lot bird, usually congregating around dumpsters and soiling cars. We found our crew hanging around the park pavilion. With that, we were done. The Core Team was birded out!

All in all, our Seattle trip was fabulous. From a birding perspective, we did quite well, spotting 70 or more species in a handful of days, with a whopping 23 lifers. Considering that spring migration hadn’t yet manifested, we’re pleased with our exposure to the birds of the Pacific Northwest. That, along with so many other aspects of Seattle, was simply fantastic. Seattle seems to be an extremely livable city, which is one of the highest compliments I, a critical New Yorker, can bestow on an area. Not only did we enjoy the area’s cultural attractions, but the lush forests of the Pacific Northwest were everything they promised to be. We can’t wait to go back, though next time we’ll probably explore eastern parts of the state.

While many of you responded to my plea for Seattle-area birding advice, which I appreciate immensely, one long-time reader actually offered to introduce us to some of the locals personally. Linda joined us on a wet and wild circumnavigation of Bainbridge Island. She also provided insights into the state birding scene that would otherwise be unavailable to us as tourists, for which we are grateful. 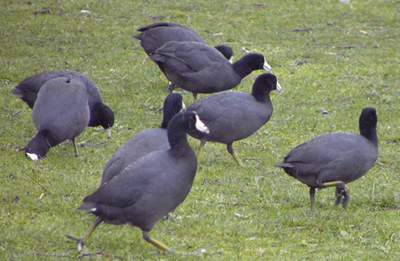