For those of you who’ve been following the drama unfolding in Kentucky regarding a sandhill crane hunt, there’s bad news. An eight-member commission unanimously approved the hunt proposal in early June.  Which wasn’t a surprise, since everyone on the commission is a hunter. Thousands of letters and emails of protest apparently fell on deaf ears. Not surprising, but certainly disappointing. Shooting could start as early as mid-December 2011.

Kentucky’s wildlife offices have been flooded with protests, whether written, telephoned or emailed. It’s probably of little use to further bombard Commissioner Jon Gassett with your good letters. Go ahead and check out his company, Southern Wildlife Resources LLC .  Now, I don’t know much about conflict of interest or what taxpayer-paid state employees should or shouldn’t be doing on their own time, but it looks to me as if he’s offering the same services his Department of Fish and Wildlife does, only for personal profit. Brokering land to hunters, hooking them up with guide services…all for a fee. It isn’t hard even for a simple bird painter to divine that Commissioner Gassett stands to gain financially from a crane hunt in Kentucky. No wonder his state office answering machine has a message on it expounding on the delicious meat of the sandhill crane. No, let’s not write any more letters to Dr. Gassett. That dog don’t hunt. Or rather, he does.

How about writing the Governor? And how about taking a few minutes to do it now? Here’s an easy, quick link to a comment form on Kentucky Governor Steve Beshear’s web site. He’ll be deciding on the proposal TODAY, June 15. Let’s give him a respectful little burst of opposition, huh? 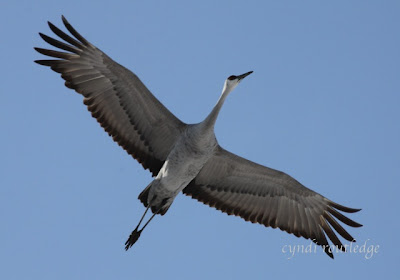 Photo by Cyndi Routledge
These birds belong to all of us, not just a few hundred gunmen.  Why should they get to unilaterally decide that the sandhill crane will be a game bird in Kentucky?  We must make our voices heard.  As always, thank you for caring.  And especially for acting.
Kentucky crane hunt sandhill crane hunting Sandhill Cranes
Share: