I mentioned last week, while talking about rails and the Pacific, that Tonga is not a particularly birdy birding destination. A combination of extinctions and proximity to Fiji means that a trip to that island group would net you pretty much all the same birds plus a whole raft of others. But hey, not everywhere can be star birding locations, and besides, there is more to life than just birding. Tonga is still a fun place to visit, particularly if you’re a poor PhD student anxious to escape the Austral winter. Where a British holiday-maker may get their cheap winter sun in Spain or Egypt and an American might head for Mexico, in New Zealand the islands of the South Pacific have recently been opened up by a network of budget operators for cheap holiday escapes (possibly helped by the large Pacific Islander population living in Auckland and other New Zealand cities needing regular flights home to see families).

A cheap holiday looking for the sun didn’t mean I was going to leave the binoculars at home, however. But I had reservations about what I might see, particularly in urban areas. I recalled spending two days in Honolulu and seeing approximately zero native landbirds (I wasn’t trying hard, but still) and figured I might have to work pretty hard to see anything (something that might be tricky to convince my not particularly birdy companion to try). It didn’t take long to be set right though, as I managed to get my first native species, the Polynesian Starling, while drinking a Coke on the waterfront of Nuku’alofa, the small town on Tongatapu which is Tonga’s capital. This starling is part of the wide ranging genus of glossy starlings found across the Pacific, Northern Australia and Souteast Asia. According to the guides it is a forest bird in Fiji (and an elusive one, I never saw one in my week there in 2005) but in Tonga I saw it in the towns and country gardens. Another native bird that quickly showed itself to me in the capital was the Polynesian Triller, a member of the cuckoo-shrike family. We soon left the capital, briefly, to examine some interesting ruins in the countryside of Tongatapu (which is the biggest island in Tonga and that isn’t saying very much). Amongst the countryside we encounted some new birds as well, including the White-rumped Swift, the Wattled Honeyeater and the sublime Many-coloured Fruit-dove which I was too far away from to photograph, but have managed to obtain a photo as it is too pretty not to show. The next day we caught the (alarming) ferry to the nearby island of ‘Eua. The ride over was grey and choppy but this was apparently what large numbers of Masked Boobies, Wedge-tailed Shearwaters and Brown Noddies enjoyed, and we saw plenty of them. Whereas Tongatapu was flat, ‘Eua was quite hilly and had a great deal more forest. In particular there was a large are protected on the eastern side of the island (about a third of the island) as ‘Eua National Park.The island is less populated and quieter. The hotel we stayed on was on the shore, from which you could watching passing seabirds, including serene White Terns, as well as summering Humpback Whales! Tonga is famous for its whales, and there are opportunities to swim with them in the northern islands. Further down the coast Grey Noddies and Brown Boobies nest on the cliffs. The coast by the hotel

The coast around the hotel was good for the small landbirds seen on Tongatapu, along with birds like the Collared Kingfisher and wintering shorebirds like Ruddy Turnstones, Wandering Tattlers and Pacific Golden Plovers. One particularly nice sighting one evening involved one of the Pacific’s other widespread self-introductions, the Barn Owl, which floated across the golden sky at susnset. A nocturnal visitor to my cabin was the Oceanic Gecko, a large widespread species which may or may not be native. The hike up to ‘Eua National Park is also worth a visit. It is mostly through regenerating native forest or even some pine plantations, and can be hot work, but the forest has enough natural elements to house a spillover population of Red Shining-parrots. These medium sized parrots, related to the rosellas of Australia and kakariki of New Zealand, are endemic to Fiji but were so valued for their feathers that they were introduced to Tonga before Cook arrived. They are quite wary but stunningly beautiful if you can get a look at them. The forest also has most of the Buff-banded Rails I saw on the trip (other than in the resort mentioned last week), as well as two further species of pigeon, the large Pacific Imperial Pigeon and the dinky Purple-crowned Fruit-dove. We also saw Pacific Flying Foxes, which we had apparently disturbed. At the summit of the climb was a long escarpment that ran the length of the island from north to south, beneath which was ‘Eua National Park. From two walkways jutting out over the escarpment you could watch Red Shining-parrots and Pacific Imperial Pigeons flying over the forest, as well as the White-tailed Tropicbirds that nested in the cliffs. The escarpment of ‘Eua National Park Even with a decimated fauna it is still possible to turn up surprises. At the end of our walk up to ‘Eua National Park we sat at the end of the road waiting for our ride when I saw a small parrot flying high overhead, followed by another. I barely got more than a seconds glance, but it was obviously not a Red Shining-parrot. The flight was frantic, which is a strong contrast to the more languid flight of the shining-parrots. All they could be, and were, were Blue-crowned Lorikeets. These diminutive parrots are part of a genus, Vini, which is endemic to Polynesia. The Blue-crowned Parakeet is supposed to be extinct on Tongatapu and ‘Eua, but recently have been found surviving on a small islet near Tongatapu. This to me is some of the fun of birding the non-megsstar destinations, finding things people don’t expect to be there! 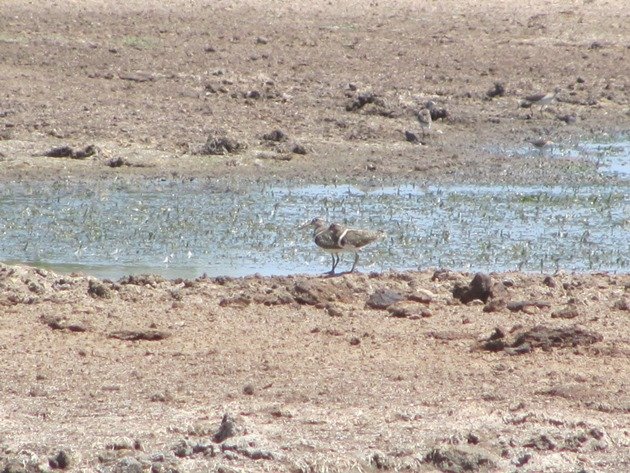 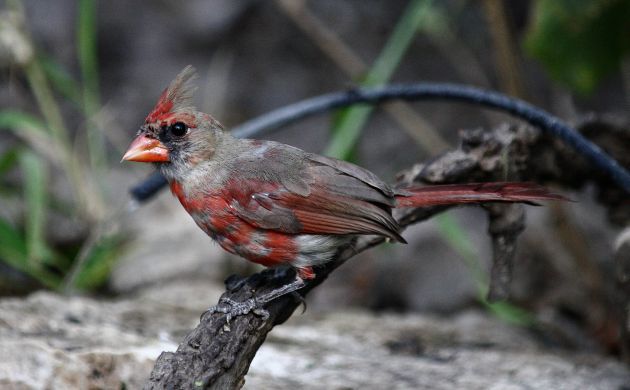