As I was saying (see Part I),  I, David, Renato & Paola, and birders from four different continents had just been treated to one of the most spectacular feeder bird displays imaginable. Spotting an Andean Cock-of-the-Rock is cool enough but one simply does not expect to get so close to toucanets, pihas, barbets, or mountain-tanagers.  Yet, the main event had yet to commence!

Refugio Paz de Las Aves is famed far and wide primarily for its antpittas. Maria the Giant Antpitta, Willy the Yellow-breasted Antpitta, and Shakira the Ochre-breasted Antpitta enjoy a measure of celebrity unmatched by other antpittas or really many other birds at all.  Their fame derives from the unique relationship they have with the Paz brothers, a miracle of alchemy that essentially transmutes worms into birding gold. Angel and Rodrigo bribe their resident antpittas with chopped worm fillets in exchange for crippling views of some of the most sophisticated skulkers in the neotropics. Next, you admire an amazing antpitta!

What could be simpler? Of course, the process consists of infinitely more steps sequenced over many long years. The end result, though, is an opportunity to admire some really fantastic, utterly bizarre birds.

Willy served admirably as the first act in the amazing antpitta show, creeping out again and again from cover to take center stage and nosh on worm tidbits. One simply cannot ask for better views of an antpitta than this. 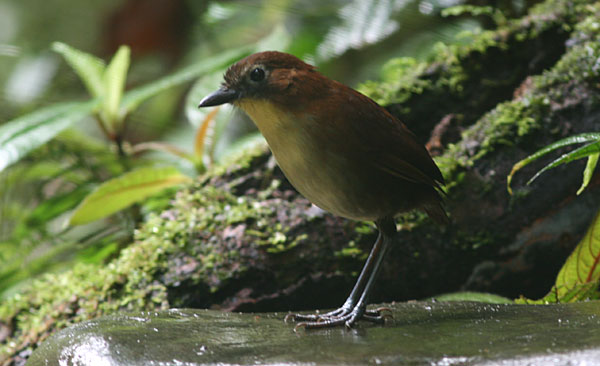 Next, we sought out Maria, the grand dame (in more ways than one) of Refugio Paz de las Aves. Not only is Maria a Giant Antpitta, the largest of her kind, but she was also the first bird to respond to Angel’s enticements. The affection the Paz brothers feel for Maria, and all of their other antpitta amigos, is evident in their hushed calls: “Maria, Maria, venga, venga, mi amor.”

It became evident that we wouldn’t be encountering Maria out in the open. Angel explained that Maria, who has raised many successful broods over the years, currently had a nestful of eggs. Sorrowful about the prospect of missing out on the most famous antpitta of her age, we set off to find one of her myriad children only to come upon a truly special sight, one I never anticipated but will never forget… Maria the Giant Antpitta on her nest

Wouldn’t you know it, we did encounter an ambulatory antpitta up the trail, Maria’s mate. Giant Antpittas sort of resemble goblins creeping through the bush, or maybe fasciated footballs! Don’t get the impression that the only birds in this colossal cloudforest were in the employ of the Paz brothers. We spotted lots of birds that weren’t “expected” while missing more than a few (like the other antpittas, owls, quetzals, etc) that often turn up. For example, we all set up sentry at a tree favored by the resident fruiteaters, specialty birds of this area. The fruiteaters did not turn up, alas, but Dark-backed Wood-Quails offered unprecedented looks. Wow! I also observed at that spot sweet species like Long-tailed Antbird, Uniform Antshrike, Gray-breasted Wood Wren, and Chestnut-capped Brush-Finch. Suffice to say, Angel Paz’ antpitta show lived up to the hype. Nothing in my experience compares. The morning’s proceedings, from the cock-of-the-rock to the feeding frenzy to the assorted antpittas, could fairly be described as an embarrassment of riches. But believe it or not, there was more! I still hadn’t visited the hummingbird feeders… « Previous post
Is the Belardo Curse Still in Effect?
Next post »
An Interview with Alan Contreras, Author of Afield: Forty Years of Birding the American West