Sometimes, when I’m writing trip reports about far off places (relative to most of my readers) I wonder what exactly people make of some of the birds I mention seeing. It’s easy to talk about what a Storm’s Stork, a Red-fronted Parakeet or a Black Swan is without having to wonder if the reader knows what I’m talking about. But there are types of birds that many European or American readers will not only have never seen but also not have much idea what it is or how it relates to birds in general. What, exactly, is a koel? Is a Coua a bird or a city in Brazil? Is a saw-wing a bird or an engine part? Is a logrunner a bird or a black market timber trader? This isn’t a poor reflection on anyone, there are a lot of bird types out there that I don’t know about. I had never heard of a seedcracker until two minutes ago when I went looking through a newish book to find a type of bird I hadn’t heard of before, and that took me less than two minutes. (It’s a type of estrelidid finch. Couas and koels are both cuckoos, saw-wings are swallows and logrunners are an odd unique thing from Australia who’s only relative is the charmingly named Chowchilla). It was, recently, pardaoltes that got me thinking about this. What, exactly, is a pardalote? I’d never heard of them until 2005 when I saw some in the Botanical Gardens of Canberra in Australia. There were two species there, even, of a type I had never heard of. What a treat! They were small, strikingly marked birds with stubby bills. But what exactly were they? A Spotted Pardalote! What a treat!

Pardalotes are actually their own family, and a family entirely endemic to Australia. Insofar as they relate to other bird families, they are perhaps closest to the thornbills, another family that is mostly Australian but reaches as far as Thailand and Fiji. That family is sometimes known as the Australian warblers, but that perhaps isn’t the best name because it leads to bad habits in mental sorting. Make space in your mind instead for new families that have a standing equal to families you already know about. Pardalotes are types of songbirds, same as treecreepers or shrikes. The first thing you notice about them is their size and striking plumage (mostly), but if you see them in a book first the first thing you notice is that there aren’t many of them. You’ll find pardalotes over most of Australia, but only four species in all. One of those species, the Forty-spotted Pardalote, is found only in a small part of Tasmania. The others are much wider ranging, although the ranges of the Spotted Pardalote and Red-browed Pardalote don’t overlap much. The back of a Spotted Pardalote shows how spotted it is.

Pardalotes are dietary specialists par-excellence. As I’ll discuss in a later post, Australia’s environment produces many opportunities for birds that can use the superabundance of sugars that trees produce there (due to poor soils and lots of sun), and pardalotes have specialised in targeting lerps. Lerps are the carbohydrate rich protective shells exuded by tiny bugs (hermipteras) that suck sugars out of the leaves of eucalypts. Their stubby bills make them efficient at this, and unlike their insect hunting thornbill relatives, they are fairly sedentary hunters, content to take insects off leaves without chasing after them. Outside the breeding season they may tarvel in large flocks looking for outbreaks of these bugs. That isn’t to say it’s easy, however. They may be the most specialised lerp hunters, but other species also covet the easy sugar, especially honeyeaters. Honeyeaters are notoriously aggressive and it has been estimated that the small pardalotes spend 5% of their day (and 9% of their energy budget) dodging attacks from territorial and aggressive honeyeaters.

Pardalotes are also ones of those rare families of songbird that nest in cavities rather than external nests. These cavities can be natural tree holes, like those favoured by Striated Pardalotes, to burrows dug into banks, as favoured by the Spotted Pardalotes. Of course, this isn’t set in stone, and Striated Pardalotes will nest in burrows too. Their nesting habits can bring them to the attention of happy birders and appreciative members of the public. They can be remarkably confiding during this time, and being low to the ground it’s often a great time to see species that may usually be high up in the trees. For the most part pardalotes have adjusted to life with people and it is possible to see them in the wilder fringes of even huge cities like Sydney. They do need older trees, which host more lerps, and they can suffer due to some land use types. The exception is the Forty-spotted Pardalote, which was probably never very common but is now endangered and has a very restricted distribution. But for their small size and the many possibilities people have to overlook them, they are an important part of the Australian Outback. Where numbers of lerp eaters drop due to increased numbers of aggressive Noisy and Bell Miners (both honeyeaters), eucalypt forests can experience dieback as the lerp bug infestations spread unchecked. So let’s hear it for the wonderful pardalotes! 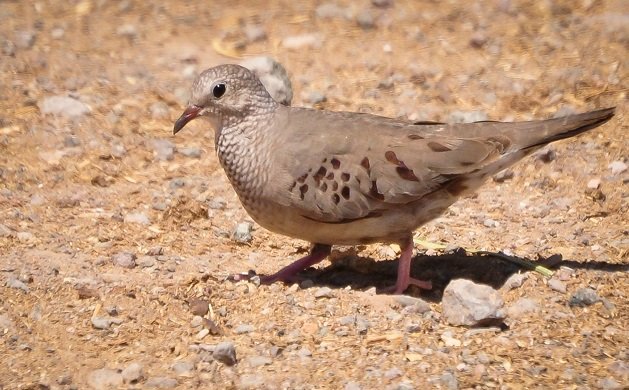 La Paloma, The Doves of the Baja

« Previous post
For Europe’s Environmental Stewardship, a Man From Malta?
Next post »
Birds Are Migrating South. It Must Be Fall!