Chrissy Guarino is an ace upstate New York birder who has written guest posts for 10,000 Birds before.  Whether she is writing about the coming spring, chasing an elusive Ross’s Gull or helping to band Northern Saw-whet Owls she knows how to tell a tale.  This one is no different…

I bought my dad a 10,000 Birds t-shirt for Christmas in 2007 not realizing that it would turn out to be a priceless piece of magic.  I bought him the t-shirt that has a Northern Goshawk on the front and a crazy picture on the back of a goshawk taking a swipe at a deer.  It says something prophetic like “Go birding- Who knows what you’ll find”.  As if goshawks really do attack deer or something.  It’s a great t-shirt.  Everyone should buy one.

On Mother’s Day, 2008, I met up with my folks for a little spring birding in Connecticut at a great place called Bent of the River in Southbury.  We had warblers on the brain, of course, because it was early May and that’s what you look for at this time of year in the northeastern United States.  We really weren’t having such a great day.  We saw a few Ovenbirds and a pair of Louisiana Waterthrushes, we heard a Black-throated Green Warbler, we saw a few Black-and-White Warblers, we had a brief look at what might have been a Grey-cheeked Thrush, and we had great looks at a Worm-eating Warbler.  But mostly we were waiting for the birding to improve.

After we walked through a gorgeous patch of forest, the trail meandered through a grassy open area that was filled to the brim with Prairie Warblers (which don’t actually live in prairies), Indigo Buntings, Blue-winged Warblers, and a few Baltimore Orioles and Field Sparrows sprinkled in for good measure.  Nice birds for sure, but still kind of a slow day for warblers.  We met up with a small group of birders having a similarly slow day and chatted briefly before going separate ways on the trail. The sun had just managed to burn through the heavy fog that had covered the little river valley (where Bent of the River is located) and the temperature was starting to creep above 40 degrees F and we were optimistic that the warbler action would pick up.

I glanced up in time to catch a raptor flying overhead followed quickly by another.  My initial thought was that they were perhaps a pair of Peregrine Falcons because I glimpsed what looked like a mask on one of their faces.  They began climbing higher very quickly on the thermals that were being generated by the sudden sunshine so I couldn’t see their faces any more.  After a bit more scrutiny, we had to rule out falcon because of wing shape and we decided they were accipiters, but they didn’t look small enough to be Sharp-shinned Hawks and the way they flapped their wings was too slow for Cooper’s Hawks.  It’s difficult to judge size of soaring hawks, so it was certainly convenient that the two birds met up with a Red-shouldered Hawk riding their thermal, which gave us a great size comparison.  These birds were about the same size as the Red-shouldered Hawk.  Have you guessed yet that what we were seeing was a beautiful pair of Northern Goshawks?  They were the second and third Northern Goshawks I’d ever seen.

We noticed that the birds were both fairly light underneath, not cinnamon like a Cooper’s or a Sharp-shinned Hawk.  Also, they had the most peculiar fluffy undertail coverts that looked like bloomers fluttering around their legs.  When we checked the field guide it mentioned this field mark and also pointed us to the noticeable bulging secondaries.  After we clinched the ID, I sprinted off down the trail to find the other group of birders so they could see the birds.  I didn’t find the birders but I continued to enjoy great looks at the birds.  I called to my parents who were looking the other way, ”I can still see them if you want another look!”.

They turned and looked at me like I was crazy and said “WE’RE looking at them over there, what are you talking about?”.

My dad walked over to where I was and looked at MY pair of goshawks, turned to look at the OTHER pair that my mother was looking at and then looked at me in disbelief.

10,000 Birds does not guarantee goshawk sightings when wearing one our wonderful t-shirts.  Sure, your odds of seeing a goshawk increase exponentially when wearing one but we really can’t guarantee your sighting such a good bird.  After all, maybe you are a really bad birder and you’ll miss that gorgeous accipiter flying right past you. 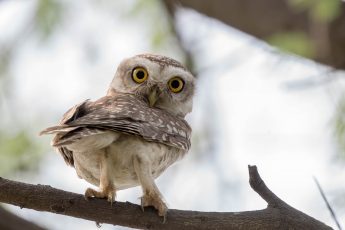 « Previous post
Where Are You Birding this Second Weekend of February 2009?
Next post »
Which Bird is Named after Soiled Underwear?