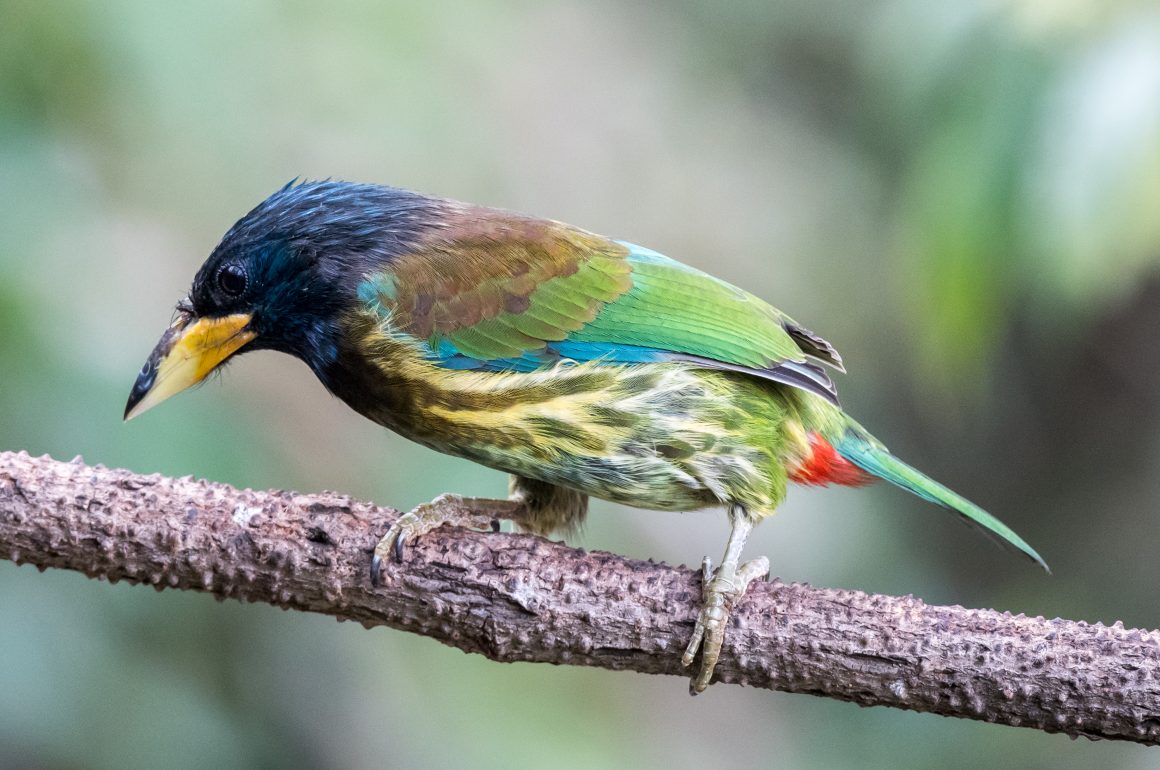 Re-issue! Re-package! Re-package!
Re-evaluate the songs
Double-pack with a photograph
Extra track (and a tacky badge)

So sing The Smiths in “Paint a vulgar picture“. As you can probably guess, the main purpose of my posts not centered on a specific location (e.g., “Birds of Shanghai”) is to reuse photos I have already used in such location-specific posts. Man has to be thrifty with limited resources, which in my case are decent bird photos.

Anyway, apparently, barbets are named for the bristles at the bases of their bills (the French word “barbe” means “beard” – I guess that “barbed wire” has the same origin).

According to the HBW, there are 41 species of African Barbets and 34 species of Asian Barbets. There are also 14 species of New World Barbets and 2 species of Toucan-Barbets (all in South America). Unfortunately, I have so far seen only a few of them, and none of the ones in the Americas … but here are ten that I have seen and got halfway decent photos of.

I am not sure I would get along well with the Black-collared Barbet (Skukuza, Kruger Park, South Africa), as the HBW describes the species as “vocal and social”.

Apparently, the species also tends to be a bit of a bully (HBW): “Species’ aggressiveness towards other hole-nesters, and its frequent dominance over smaller barbets through interactions and even enlarging of their nesting and roosting holes, possibly renders it less vulnerable to loss of suitable breeding sites”. The downside of being social?

The Blue-throated Barbet (Xishuangbanna and Baihualing, Yunnan, China) is probably the barbet species that is the easiest to see in Southern China. However, the eBird entry sounds like it has been written by a frustrated bird photographer: “A common inhabitant of lowland and foothill tropical forests, where it sings brightly but often unseen from the canopy”.

The Brown-headed Barbet is basically an Indian bird. I saw it in a park in Delhi, and indeed the HBW remarks that it “has adapted well to human habitation, and is common and widespread in the parks and gardens of cities such as Delhi”. (I once had a visitor from India here in Shanghai, and he asked me if/why there are no birds in Shanghai. And indeed, birds are much more visible even in big Indian cities such as Delhi than they are in Shanghai. Might have something to do with the fact that they were hunted here until quite recently).

The Coppersmith Barbet (Delhi, India) was not named after Sir Edward Coppersmith (1840-1897), a renowned Irish ornithologist. Instead – and rather boringly, if you ask me, given that the alternative origin is a made-up ornithologist – it is named after its call, which “is a loud rather metallic tuk…tuk…tuk (or tunk), reminiscent of a copper sheet being beaten, giving the bird its name” (Wikipedia).

Future generations of birdcage designers will probably adapt the dimensions of the wire.

The red tufts of the Fire-tufted Barbet (Fraser’s Hill, Malaysia) look like they are poisonous to touch. Its call is rather interesting – according to eBird, its “strange song is a loud accelerating creaking that is reminiscent of rusty machinery revving up.” Not a bad description, for once.

The Golden-throated Barbet (Baihualing, Yunnan) has an interesting species name, franklinii. What is particularly interesting is that (at least according to the HBW) this name was already given to the species in 1842, at a time when Sir John Franklin was still alive (he died stuck with his ships in ice in 1847 in the Northwest Passage expedition). So, he must already have been perceived as a national hero after his previous three arctic expeditions. Maybe – already having a barbet named after him – he should have stopped then. On the other hand, by now he would surely be dead anyway.

If you prefer black-and-white photography, maybe the White-eared Barbet (St. Lucia, South Africa) will be your favorite. (Tip for photographers not only of birds: Turning a photo into black-and-white will make it look like art, particularly when the subject is decay. Rusty bicycles are particularly recommended, though personally, I prefer run-down chemical plants).

A late entry – just seen on Hainan in January 2022 – is the Chinese Barbet.

Finally, my personal favorite is the Great Barbet (Baihualing, Yunnan) – not because of its larger size, but because of its combination of colors that somehow manages to be colorful without being gaudy (something that parrots almost never seem to manage). It is like all the other barbets turned up to ten, or “Dimed out“. Best song I have heard in quite a while (Titus Andronicus), though I have to admit the way I try to squeeze it into this post is quite clumsy. Plus at my age, I should really like somewhat different music. Probably jazz.

P.S. A day after writing the bulk of this post, I was re-reading the short novel “Meat is murder” by Joe Pernice – a sort-of coming-of-age story frequently mentioning The Smiths. Highly recommended, as is some of the music of Joe Pernice (e.g., Pernice Brothers). And found the following bit (the mother of the protagonist addressing him moping around in his bedroom):

“Why don’t you listen to something else … like jazz? That Smith Family is so depressing”.

Champions of the Flyway - the Dakar Rally of Birding