Last week the most amazing thing happened-a Striated Heron Butorides straita came into our garden! Now we don’t live far from the coast, especially when the tide is in, but this was a first for us. I suppose I should not say that, as there could quite easily have been one in before and we just missed it! This is one more species to add to our “garden list”, which gets forever longer. Only a few days earlier Grant had just set off for work and had to pull over and call me “Did that Black-necked Stork fly over the garden?”. Thankfully it had, as I don’t like his chances of rounding it up and sending it back over!

Grant was getting ready for work when I saw movement in the garden and realised we had a juvenile Striated Heron in and it was checking out the small pond we have for the birds and the frogs. Sadly we are out of tadpoles at the moment or it would have had quite a feast. I grabbed the camera and then cringed at the frog footprints all over the kitchen window-too late now-if it’s not them it’s gecko prints! It’s a constant war against natures footprints on the kitchen window, as they all love the creatures that are attracted each night when the light is on. They get a nice meal and we get a less than perfect window for taking pictures through. Cheeky Green Tree Frog hanging on the thermometer on our kitchen window!

Anyway, I got some photos and it really is a gorgeous bird…… I then attempted to get out of the house for a better photo….not entirely successful as it hopped onto the fence and went over. However, it didn’t go far and I was able to get another photo. Well, that’s all very nice, but you will need to see what an adult bird looks like won’t you!? Off I went to the beach to a spot where I knew I would find a pair and get some more photos. They are very vocal-bit of a bark sometimes! Anyway I soon found a nice specimen resting in the shade of a rock and got a couple of photos….. For those of you that read this website regularly you will have seen there have been some Yellow-crowned Night-herons in the news recently-well we never saw one when we visited the USA, but to have this in your garden is pretty cool! 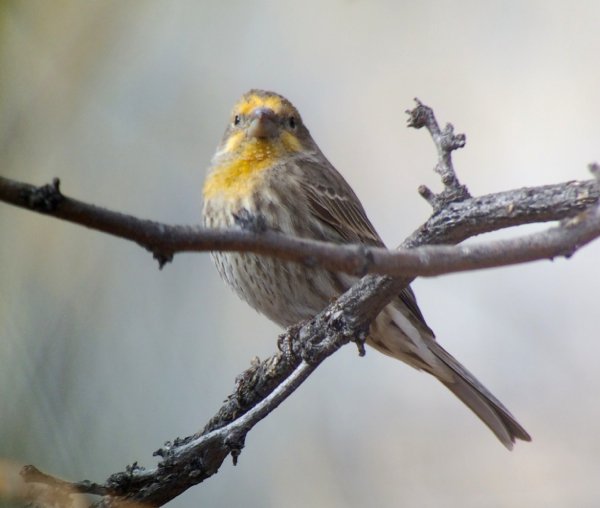 What's Up With This House Finch