February 20, 2011 by Julie 3 Comments
Birding at Viera Wetlands near Titusville, Florida, while speaking at the Space Coast Birding and Wildlife Festival in January. My old friend, the osprey, took five to preen atop a snag. I quickly set up my Leica scope and camera to capture a few shots. 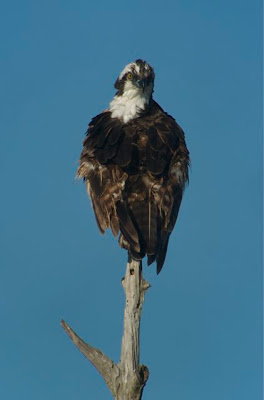 I was bemused by a photographer with a very long lens who walked up while I was digiscoping the bird. Just to make conversation, I mentioned its advanced state of molt.  He made a flat retort.  “Immature bird. Yep, immature bird.” I turned back to my scope and searched quietly for evidence of such in its tatty plumage, but came up empty. The wing feathers were so worn that the pale fringes that might have indicated immaturity were long gone. You can see the fresh blackbrown back feathers and scapulars coming in, but that’s all fresh adult plumage. The osprey was preening for all it was worth, trying to make itself look and feel more presentable.  It had a couple of lovely new dark deck feathers on its tail, but the rest were hash, good only for falling out and being replaced–soon. 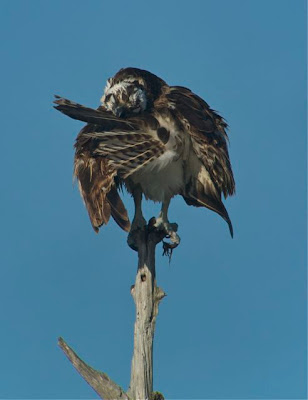 Meanwhile, the photographer, who I may have mentioned had a very big lens, pontificated to me about the bird’s youth. I started to say something about how the molting schedule of male and female ospreys was different; the females molt while incubating, and the male feeds them through this difficult time, but he kept interrupting me, so I smiled and nodded.
I couldn’t even sex this bird without seeing its breast. It looks like an older female to me in the face, but that’s pretty subtle stuff. Males tend to look goggle-eyed; females look squintier and smaller-eyed, but I’ve garnered that from having drawn them and compared notes with Alan Poole, author of  the excellent book Ospreys: A Natural and Unnatural History.  To sex the bird, it would have to turn around so I could see if it was wearing the dark brown chest markings we jokingly refer to as a “bra,” because only female ospreys wear them. Unless, of course, it happens to be a male with dark chest markings, and that happens, too.
The eye of an immature osprey may retain its dark orange coloration until October, after which it steadily lightens to yellow. No help there; this was January. The crown of an immature osprey tends to be more heavily streaked with brown than that of an adult. Again, unless it’s an adult with a streaky crown.
All these things ran through my mind as I tried to reconcile the photographer’s proclamation that this bird was immature with the lack of evidence at hand.  He apparently took my silence for inexperience, and was proud to impart but not augment his knowledge, so I stayed my course of smiling and being pleasant about it. I wasn’t at all sure this was an immature bird, but he was, and good for him. It didn’t matter anyway. It was a nice osprey, and it was preening right here where we could both immortalize it. In bird identification disputes, I always come back to the central question: Does the fate of the world hang on this bird’s correct ID?
While we were chatting, a big flock of migrating tree swallows lifted up from the wax myrtle shrubs, gathered in a big cloud, and coursed back and forth around the preening osprey. “These swifts!” the photographer exclaimed. “They’re so fast, I can’t get a picture of them!”
I had to turn my head all the way around and bite my cheek to hide my grin. One of the best things I learned at Harvard was as an outspoken freshman at my first afternoon sherry gathering. Someone said to me, “No matter how much you may think you know about a subject, there is probably someone standing right behind you who knows a LOT more.”  Amen to that, and thank you, guardian angel, for clobbering me with it as a freshman.  And so those who know how old this osprey might be,  photographed January 28, 2011 at Viera Wetlands in Florida, step right up. Heck. I’d love to think Big Lens may be right after all. 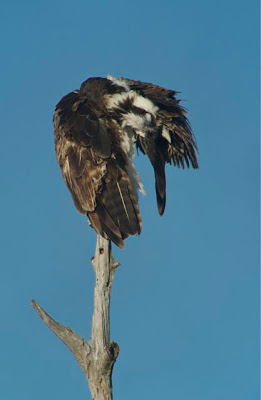 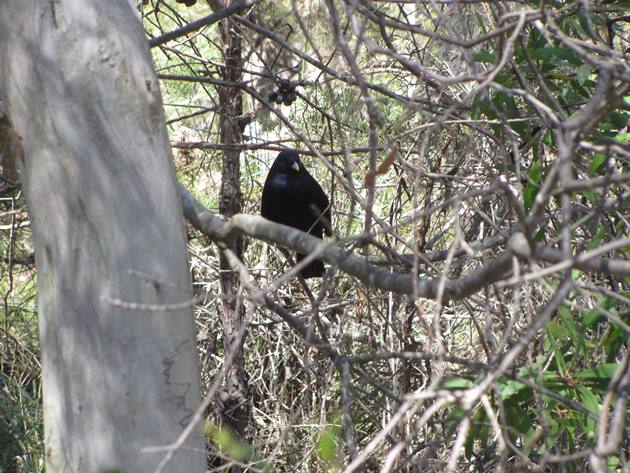 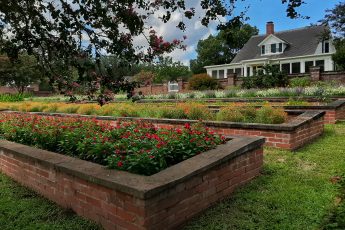 Birding at a Historic Sporting Estate

Best Bird of the Weekend (Second of January 2010)