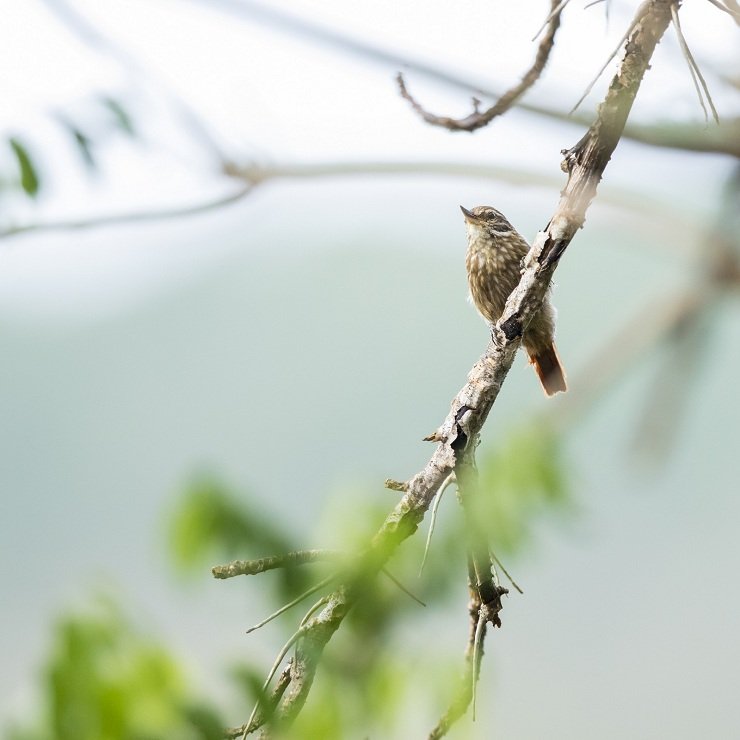 Over a decade ago I stumbled upon the first edition of the field guide to the birds of T&T and marveled at the astounding diversity within its pages. I had already been birding for some time, but my photography was poor and my identification skills were abysmal. Not only did I have zero clue that a field guide existed, I also was completely unaware that other birders lived here. To see such a comprehensive resource (which has since been revised twice) with my own eyes lit a fire within that’s still burning today.

Back then, I distinctly remember drooling over plates of birds I needed to see. Many of them were outrageously plumaged. Eventually, I learned to read the “status and distribution” section to whittle my must-see list down to species that were actually possible within T&T. Note that I have not yet given up hope on seeing a King Vulture here though! One of the birds that caught my eye from the very beginning was a tiny, strange-looking brown bird – Streaked Xenops. 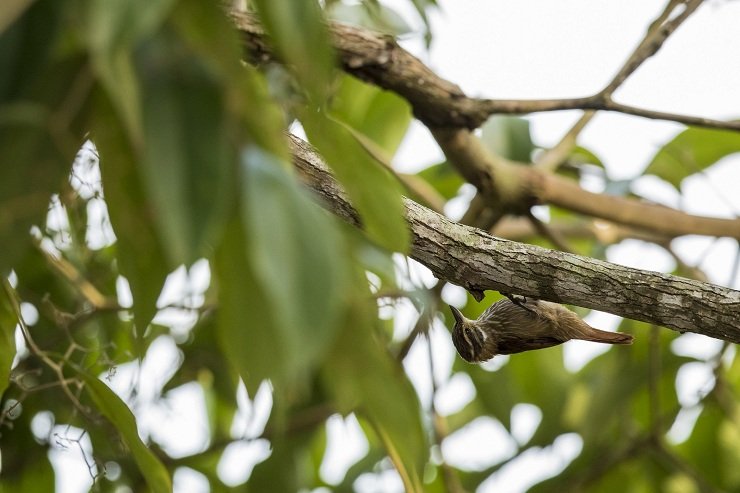 I figured that hey, it’s a resident so it’s here all the time, I must see it at some point, right? Well, I did for the first time in 2012 – a single bird hopping maniacally from twig to twig directly overhead. Quickly I realized that I may as well have never seen it. I was on a Christmas Bird Count and none of the other more experienced birders even attempted to get a good view of it. It was simply “Streaked Xenops overhead” and everyone moved on. I carefully noted this.

The years passed and I had several similar experiences with this cryptic species. Until last weekend, when I came upon one, then two – and finally three! 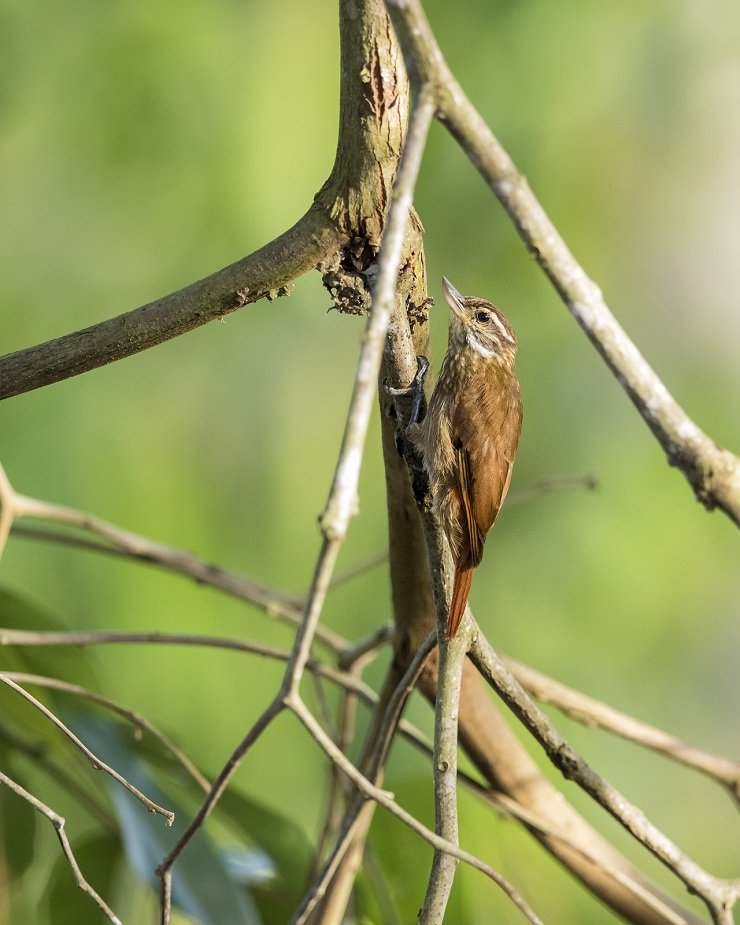 Sure, there were other birds around – but I was all about the xenops at this point.

The first xenops I was looking at began calling – I had only previously heard them vocalize once – and before long another bird showed up in the distance and drew closer. 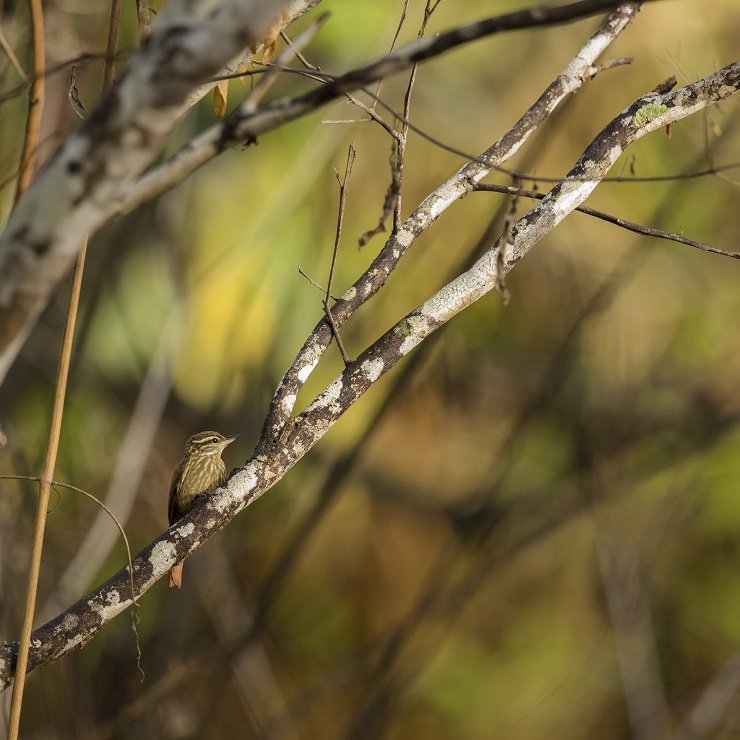 The Streaked Xenops that came when called. I only retrospectively noticed the buff eyebrow (as opposed to the white eyebrow of the bird I had been observing before).

At this point, I was in disbelief. After so many years of struggling to simply get a clear view of one of these birds, here were two. Never stopping to chimp over my camera’s rear screen, I continued, pedal to the metal. For anyone who’s never tried to photograph quick-moving forest birds before, you just never know what your success rate is going to be. 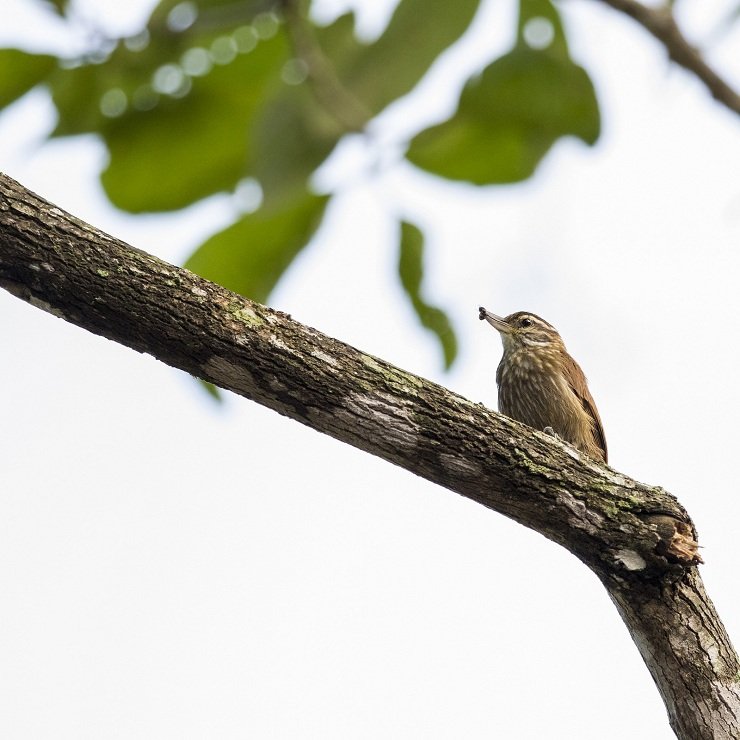 When one xenops emerged on a clear branch with a freshly snagged bug, I felt relief. I made a few images and was ready to face the rest of my life when the second bird hopped onto the same branch. Only then I realized that it was an adult with a juvenile – and the experience took on an entirely new dimension. 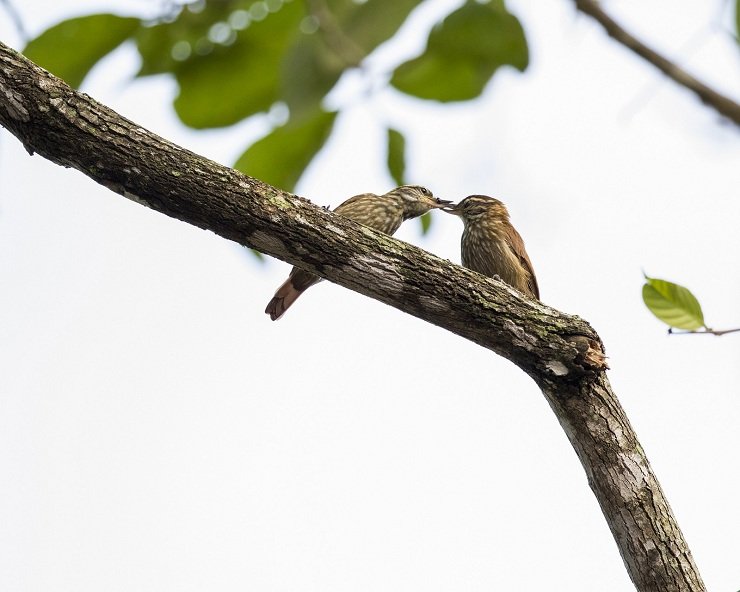 Here I was bearing witness to the education of the next generation of creeping xenopses. Even though I had already gotten more than a few “keeper” images, I continued observing the pair for quite some time.

The young bird closely followed its parent as the pair foraged together from tree to tree. It learned where to look, where to poke and how to maintain a secure footing. Xenopses move along thin branches much like woodcreepers do, main difference being that they do not generally use their tails for support. 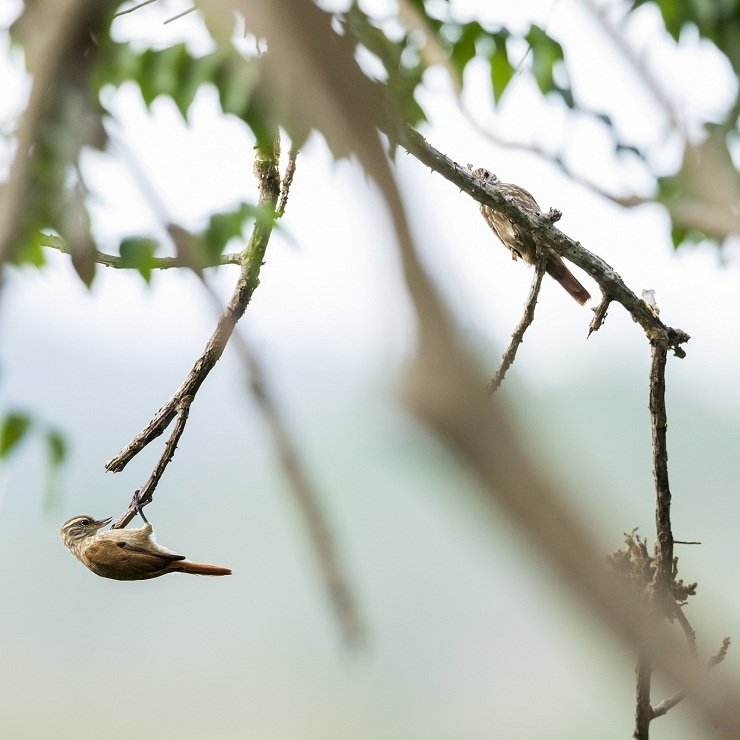 The adult Streaked Xenops (top right) keeps an eye on the younger bird, now acclimatizing to the workings of their unorthodox feeding strategies.

The young bird learned that dead twigs tend to have the most goodies within – but that usually requires some prodding. Under the watchful eye of its parent, it learned that prodding a dead twig must be done while holding on to a less-dead twig.

While observing this pair, a third Streaked Xenops flew in – and immediately the adult/juvenile pair vacated the tree. No audible call was made by either party, nor did this new bird actively chase the other two. They did not go far – but there was something different about how this third bird carried itself.

The third and final Streaked Xenops we saw last weekend.

I can only barely imagine what goes on in the lives of these poorly known birds. Eternally grateful for my extremely productive session with them, I can now share a small part of their story.

For those of you wondering about the relevance of the title of this blog post – the name xenops has always stood out to me, as do most words starting with the letter ‘x’. A bit of rummaging around on the internet led me to realize that its Greek root words “xenos” and “opos” mean “alien” and “face” respectively.

Where Are You Birding This Last Weekend of November 2009?

Where Are You Birding This Third Weekend of July 2020?