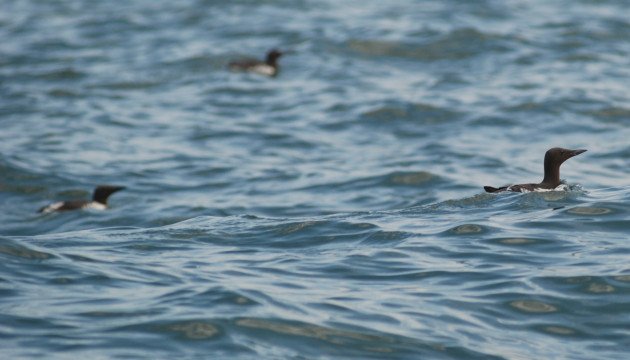 Across the world’s northern oceans, 24 species of auklets, murres, puffins, guillemots, and related seabirds make a living catching food beneath the waves and breeding, often in large colonies, on coastlines and islands. Together, these birds compose the family Alcidae, and they share adaptations that we recognize as penguin-like: an upright stance on land, black-and-white plumage, and — most important — wings that propel them underwater in pursuit of prey (see them in action here). Unlike the southern hemisphere’s penguins, however, alcids can also use those flipper wings to fly. The birds above are Common Murres, large and widespread members of the family, that I photographed last year off the Oregon coast.

Alcids sport a variety of head plumes, bill ornaments, crests, and other colorful characteristics. They nest along coasts, some in large colonies on bare, rocky cliffs; some in burrows in the ground; and one, the Marbled Murrelet, high in old-growth trees.

Alcids form a distinctive family within the shorebird order Charadriiformes. Several recent genetic analyses indicate that alcids are most closely related to the highly aerial predatory and kleptoparasitic skuas (Stercorariidae) and that these two families are in turn sister to the gulls, terns, and skimmers.

Alcids are most closely related to the predatory seabirds called skuas and jaegers, like this Pomarine Jaeger (Stercorarius pomarinus). © David J. Ringer

Alcids are thought to have originated along the coasts of the Pacific Ocean during the Eocene or even the Paleocene. They gradually spread to the Atlantic Ocean by way of the southern coast of North America (before it was joined to South America) and gained the ability to pursue prey by diving in cool waters (see Pereira and Baker 2008).

Today, as highly specialized pursuit divers, they are restricted to cool northern waters for a straightforward reason. They are warm-blooded, but their prey is not, and this gives the birds (and other warm-blooded predators, like seals) a vital speed advantage in cool waters. In warmer waters, cold-blooded organisms can move faster, but warm-blooded organisms don’t get that boost and can’t efficiently keep up with prey. They’re also more vulnerable to attack from large cold-blooded predators like sharks. (See Cairns et al. 2008.)

Guadalupe Murrelets (Synthliboramphus hypoleucus), which breed on islands in Baja California and are the southernmost living members of their family © David J. Ringer

All alcid species alive today can fly, but with difficulty. A study last year demonstrated that the largest living alcid, the Thick-billed Murre, faces extraordinarily high energy demands in flight and is also a less efficient diver than penguins are — in other words, while it can both fly and dive, it pushes the limits of both abilities, but especially flight. The authors wrote, “optimizing wing shape and form for wing-propelled diving leads to such high flight costs that flying ceases to be an option in larger wing-propelled diving seabirds, including penguins,” and the recently extinct flightless Great Auk (Elliott et al. 2013).

Much longer ago, other alcids also gave up flight; several species and genera are known from the fossil record.

While some of their cousins, especially skuas and terns, sought their fates in the skies and became some of our planets greatest aerial wanderers, alcids took a different path, exploiting the abundant food resources teeming in the planet’s cold northern waters, filling a niche similar to the one penguins adapted to fill in the southern seas. They’re tenacious, finely tuned survivors, and they look good making it happen, too.