All Three Populations of North American Trumpeter Swans Are Increasing 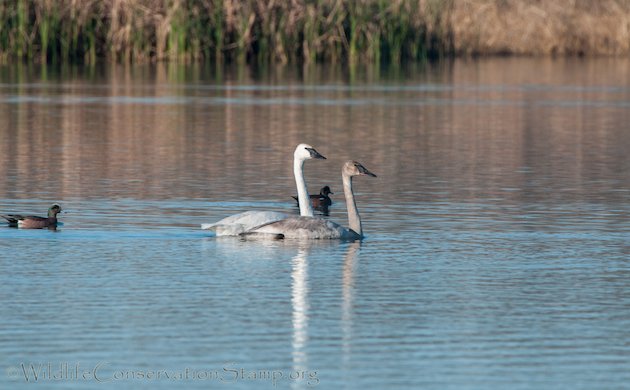 Following my local list serve I was pleased to read that there were two Trumpeter Swans (Cygnus buccinator), one adult and one immature, hanging out at the Chico Oxidation Ponds, about an hour and a half from my house. This being a life bird for me I had no choice but to take the drive. Click on photos for full sized images. The Trumpeter Swan is the largest native North American waterfowl, being five feet long, with a wingspan of seven to eight feet and weighing in at twenty-three pounds, they are hard to miss. They are differentiated from their smaller cousin the Tundra Swan by their all black bill which has a straight ridge reminiscent of the Canvasback. The Tundra Swan usually has a yellow spot at the base of the bill and shows a concave culmen profile. Although it was formerly abundant and geographically widespread, Trumpeter Swan numbers and distribution were greatly reduced during the early fur trade and European settlement of North America (1600’s to 1800’s), when it was prized for its skins and primary feathers1.

In North America they are divided into three populations for management purposes, not based on biological differences: 1) Pacific Coast Population, 2) Rocky Mountain Population, and 3) Interior Population.

During the 1980s, the Pacific Coast Population swans became the source of eggs for several restoration programs in Minnesota, Michigan, Ohio, Wisconsin, and Iowa2. The North American Trumpeter Swan survey has been conducted approximately every 5 years since 1968 to assess the abundance, productivity, and distribution of Trumpeter Swans in North America. The good news is that these majestic birds have been increasing in numbers every year! Since a Yellowstone National Park naturalist suggested in 1935 that Trumpeter Swan studies be conducted “before the species is extinct,” the species has responded well to most conservation and management actions. Trumpeter Swans continue to increase in numbers and distribution, which is cause for celebration. However, even though this species restoration is often considered a classic conservation success, significant problems for some flocks still exist. The Trumpeter Swan Society lists these as:

This video was taken at the Chico Oxidation Ponds where these swans were relaxing with hundreds, if not thousands of ducks. See how many different species of waterfowl you can see and hear!