When reports of an extremely cooperative Thick-billed Murre at Shinnecock Inlet starting coming in early last week I resigned myself to living vicariously through the photos taken by others. Though I love birding at Shinnecock Inlet, an inlet from the Atlantic Ocean to Shinnecock Bay out in eastern Long Island, I didn’t see how I would find the time to get out there. (And it had been awhile: my last visit there was in 2014!) But then some important work I had to do last week at my job got cancelled so I rearranged my schedule a bit which left me with a free day on Thursday that I could take off, a day I looked forward to even more once it was reported that a Razorbill was being exceptionally confiding as well. Most views of alcids that I have had are of birds flying by pretty far offshore or bobbing on the open ocean while I was standing on a boat trying not to get seasick. To have a chance to see two species close up without vomiting was something I was looking forward to!

But when I arrived at Shinnecock Inlet after dropping Desi off at school and driving east for an hour and a half I did not see any alcids. Though I was out on the jetty enjoying the brisk breeze and the sound and smell of the ocean I was seriously lacking any flying penguins of the north. The Common Eiders and Black Scoters were nice though. 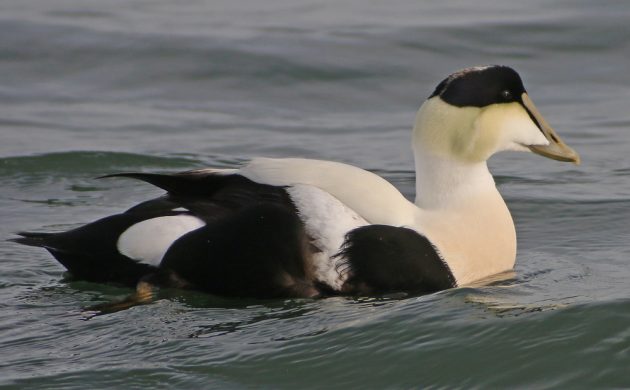 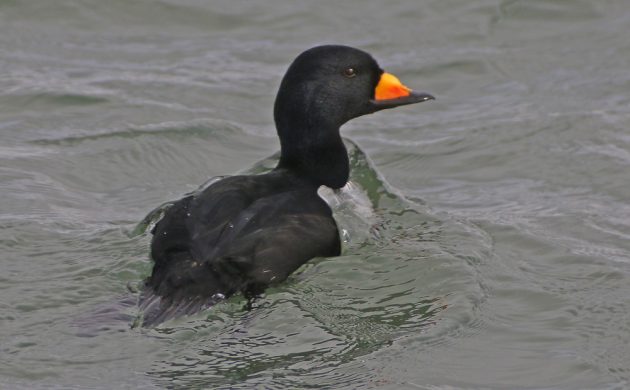 Black Scoters are elegant birds with a simplicity of style.

Then, after about half-an-hour of birding I took a break from scanning the far jetty through my scope and was amazed to notice a Razorbill floating right next to the jetty, nearly at my feet! I quickly mounted my camera to my scope, swung it around, and managed to get an image of empty water as the Razorbill had dove. When it popped up I managed to miss it again before it dove. This game of hide-and-seek played out for awhile until the elusive bird dove and didn’t come up anywhere I could find it. Frustrating, but I had great looks despite the lack of images.

Not ten minutes later the Thick-billed Murre popped up next to me as well. Once again I did not notice it approach: it was just there. And this bird was not interested in hiding under the water! 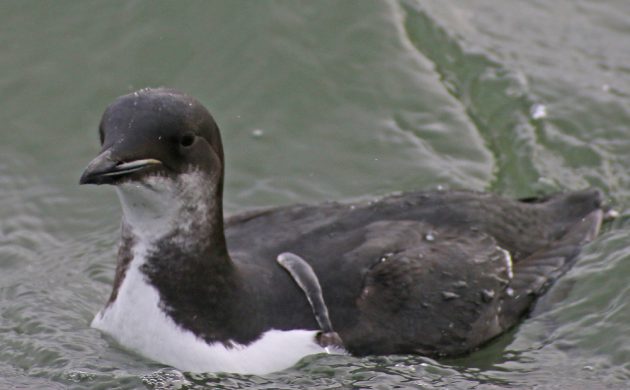 You don’t get looks like this of a Thick-billed Murre every day! 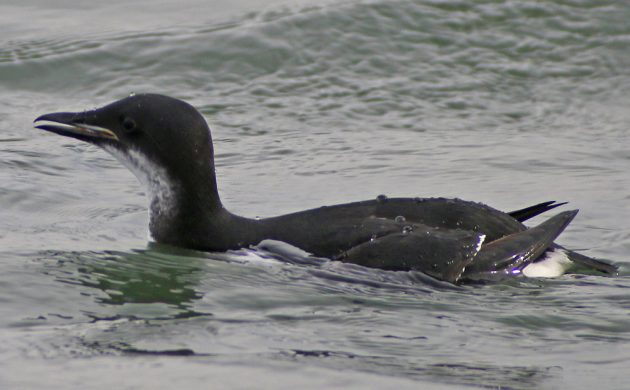 In fact, I had never had looks like this of a Thick-billed Murre. 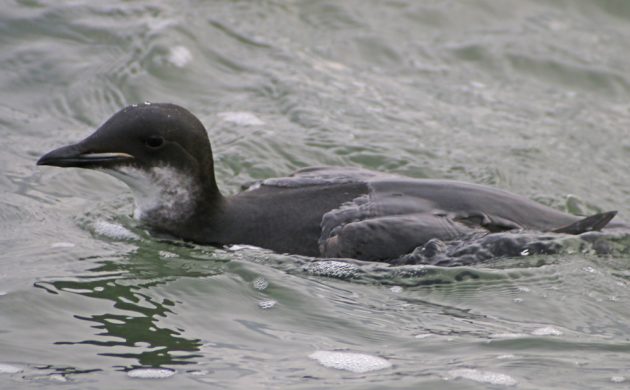 What good fortune to manage to squeeze a day off of work in!

A couple of birders arrived and I was happy to show them the murre and then the Razorbill came back too! At times we had both birds in the same binocular view. It was astounding! Stupendous! Sublime! 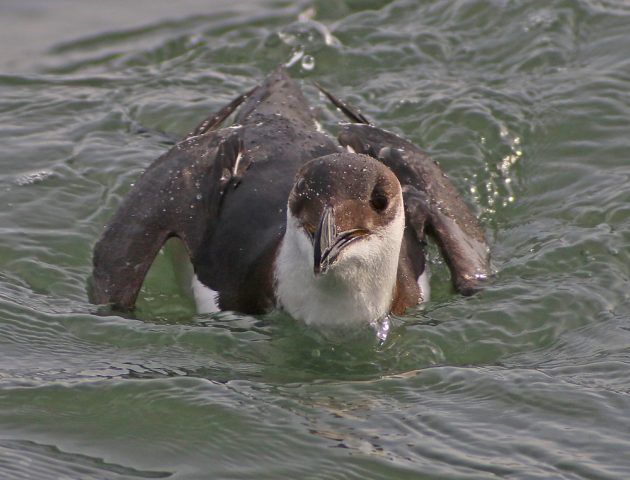 Now this is how you want to see a Razorbill! 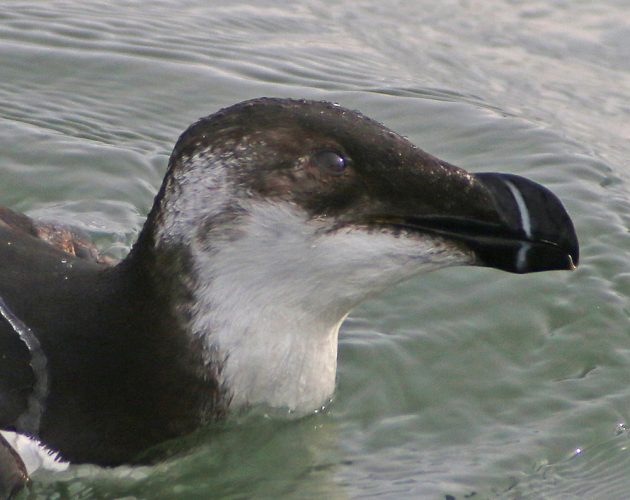 Look at that bill! 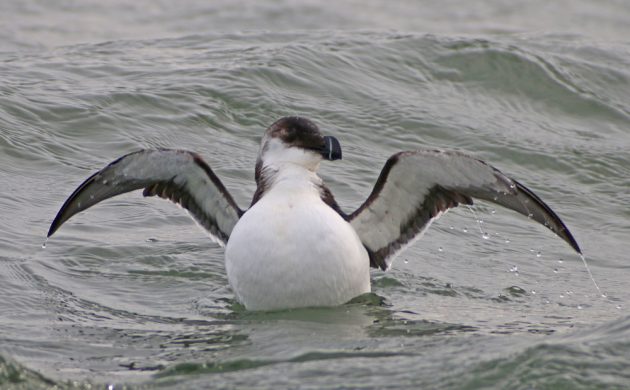 It even preened for awhile and then did a post-preening flap. 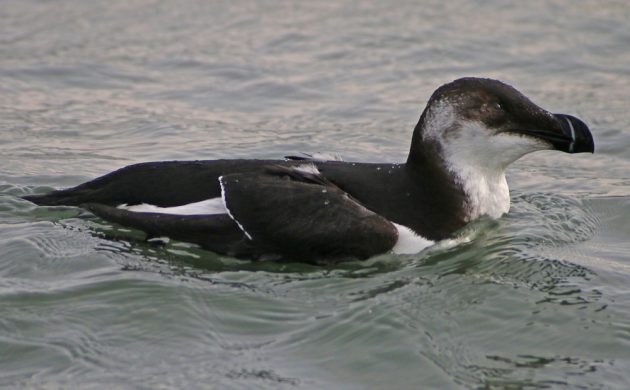 I thoroughly enjoyed the alcid show for sure.

I really can’t let it be five years before my next visit to Shinnecock considering how good the birding is there, especially in winter. Maybe a guillemot will show up soon and give me reason to go back! 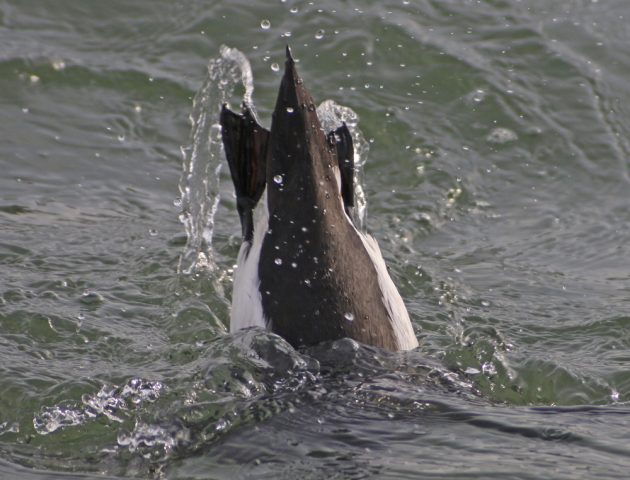