The Core Team enjoys a very special Easter tradition. We all go on a morning hike, or at least as much of one as is possible with little ones in tow. Last year found Sara, Mason, and me at Marshlands Conservancy in Rye, NY. The year before, Sara and I escaped to Discovery Park in Seattle for a more substantial excursion, and the year before that, the two of us rambled around Central Park right before we brought Mason home from the hospital. Good times! The problem facing us this year was sub-freezing temperatures in mid-April, and us with a 10-month old addition to the team. Nonetheless, a family tradition must be sacrosanct. In an effort to observe at least the letter of the law, we shelved more ambitious plans for a quick jaunt through Van Cortlandt Park.

This brisk and bright morning turned out much better than anticipated. Most of us stretched our legs while Ivy enjoyed a modest snooze in her stroller. Plus, the birds turned out in excellent diversity. I spotted two new species for the year, one a bright yellow Pine Warbler, the other a drab brown Northern Rough-winged Swallow. The precise procession of spring migration is breathtaking in its predictability. Eastern Phoebes are suddenly everywhere alongside the armies of American Robin. But these are, for the most part, the only birds of spring to be found in the Bronx during the incipient season. The anticipated chickadees, titmice, cardinals, doves, Blue Jays, Downy Woodpeckers, Red-tailed Hawks, and two species of blackbird (Red-winged and Rusty, naturally) attended our Easter excursion.

Van Cortlandt Lake usually surprises me, and today was no exception. The usual waterfowl made the scene, with Double-crested Cormorants displaying their namesake filoplumage. One Hooded Merganser hen was around, which is no surprise. Even the Pied-billed Grebe made sense, since I encountered one here in January. But of all the other species to spot, it seemed odd that I’d find a flock of Ruddy Ducks, blue bills flashing. I don’t know why, but this body of water seems to consistently meet and defy my expectations. Guess that’s why I keep coming back… 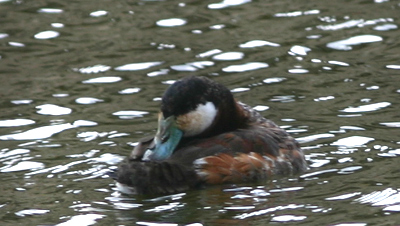