At Sea With the Marine Birds of the Raincoast opens with the unexpected appearance of a Laysan Albatross. Do I need to say anything more? We are all suckers for an albatross, at least in the United States. The opening beautifully encapsulates the essence of the book.  The author, conservation biologist Caroline Fox, is observing the albatross’s shadow to the side of the boat. She doesn’t know the species till it emerges, almost dreamlike, from the heavy glare of the sun. A little history about the Laysan Albatross, named on the basis of a speciman found on Laysan, one of the Hawaiian Islands, is offered. With a world population of almost two million, it’s abundant in the North Pacific but considered ‘near threatened’ globally, and is an unusual sighting in the coastal waters off the British Columbian coast where Fox is sitting.

Fox notes the albatross in her “soaking-wet notebook” and watches it circle and fly back into the masking glare. She then moves the picture back cinematically, and we discover that she is sitting on a “sun-bleached cooler filled wilted, salt-infused vegetables;” we move back even more, and find out that the cooler on which she is sitting is on the bow of small boat; back even more and we are introduced to the Achiever, the green and cream-colored survey boat that travels “invisible transect lines that criss-cross much of the British Columbian coast.” Having shown us the bird, the boat, and the water, Fox then introduces herself: “Albatrosses, petrels, fulmars, puffins and gulls live out their lives along these transect lines; my job is to count them all.”

This is the story of Fox’s experiences on board the Achiever, the research vessel of the Raincoast Conservation Foundation.  The book, like the opening scene, is a deft combination of her personal observations of birds most of us rarely see, in a wild place very few people have visited, and of the natural histories of these birds. There is also a third element, only hinted at in the opening–the environmental and scientific necessity of gathering this data to document the importance of keeping the Pacific Northwest waters healthy and uncontaminated by human elements. Fox does an excellent job balancing these three elements, keeping the emphasis on the birds.

Fox relates her voyages according to the seasons, starting with her first survey in the spring. The Achiever’s survey voyages took place from 2005 to 2008; the goal was to collect baseline data on sea mammals and marine birds. Though the coast of British Columbia, a part of the Great Bear Rainforest, was rich in both, it was appallingly deficient in scientific data. And, this was badly needed.

Fox joined the Achiever around 2007 (one of the few failings of the book is that it doesn’t specify the exact year (or years) of her voyages; it’s not clear if the book is the account of a chronological year or an amalgamation of several years). She volunteered out of both scientific interest (she had just finished a master’s degree in biology) and a feeling of ownership–she grew up in the former fishing village of Lantzville, across the Salish Sea from Vancouver, and just north of the town of Nanaimo, where she boards the Achiever. It’s a small group of 10 to 12 researchers and crew members, and Fox is the sole person responsible for the bird surveys.

The surveys are conducted along those invisible transect lines that cross across the Hecate Strait from the British Columbia mainland to the archipelago of islands known as Haida Gwaii, through narrow channels and amidst weather that is often foggy and stormy, but sometimes marked by blue skies that make it easier to count the sometimes millions of birds seen along the transects down in the water and up in the air. There are 160 to 200 species of marine birds here, depending on your definition of “marine bird” (Fox defines it as “species traditionally considered coastal,” including birds like Sandhill Cranes with the more traditional tubenoses, gulls, and ducks). Fox encounters 69 species, some singly, some in huge feeding or migrating flocks. 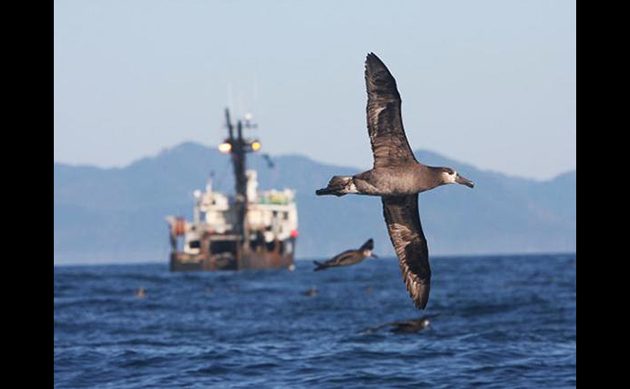 Every day seems to have been filled with unique avian experiences, though  Fox  stresses that the scientific protocols of counting on the transects meant she often had to made instantaneous identifications and then go on to the next group of birds.  She smartly spends a lot of time on Black-footed Albatross, Sooty Shearwater, Ancient Murrelet, and Red-necked Phalarope (“a woefully understudied species”) in “Spring: Flyways and Herring Milt,”; Glaucous-winged Gull, Sandhill Crane, Sooty Shearwater again, Cassin’s Auklet, Tufted Puffin, Peale’s Peregrine Falcon (a subspecies), Marbled Murrelet, and a magnificent Short-tailed Albatross in “Summer: A Fish Net Nest”; Bald Eagle, Common Raven (and their mythic relationship with wolves), Northern Fulmar, Yellow-billed Loon, and Snow Geese in “Fall: Dog Salmon, Darkness and Storms.”

There are amazing stories here. The mystery of where the nests of the Marbled Murrelet were located, for example, solved finally in 1993 when a nest was found in an old-growth conifer in the middle of the forest. The survival of the Short-tailed Albatross, which once numbered in the millions, is simply amazing. The species was seemingly killed off by feather hunters, but then, after years, reappeared at the site of one of the deserted breeding colonies, Torishima Island in Japan. The albatross was saved by its biology, a life cycle which dictates that young birds spend years at sea. The relationship between the marine birds and the Northwest indigenous cultures also has a place in the natural histories, from the Heiltsuk man Fox encounters harvesting  Glaucous-winged Gull eggs (early enough to allow the gulls to breed again), to an elder’s description of  the Haida rituals welcoming Ancient Murrelets back to the islands, where they are celebrated and subsequently eaten. Fox has a talent for writing natural histories that seamlessly intertwine biology, ecology, and history. She is also very adept at relating biological and scientific ideas in nonscientific language.

Fox’s scientific expertise, which never allows her to describe bird behavior without placing it in a specific ecological context, is framed by a cinematic eye and a lyrical frame of mind. She is one of the best nature writers I’ve encountered in recent years, able to paint experiences with emotional immediacy. Here is her description of migrating Snow Geese:

I’d seen snow geese at great distances offshore or far overhead, but here they are passing me by, low on the water, where the wind speed is lessened. With a strong southerly headwind to fly against, their powerful wings pump and their brilliant white bodies strain, but, overall, they make slow progress. Ahead on the water, I see roughly 200 tired snow geese settled together in a single, densely packed group. Although we are not close nor on a direct course, the geese are skittish. At some signal, they leap into the air and the sky becomes a blizzard of wings and the air is filled with their high-pitched honks. I see them flying down the channel for quite some time, strung out in loose lines that contrast white against the blue mountains, and nearly disappear against the fresh snow on the peaks. In the water I find a single black-tipped feather as their only trace. 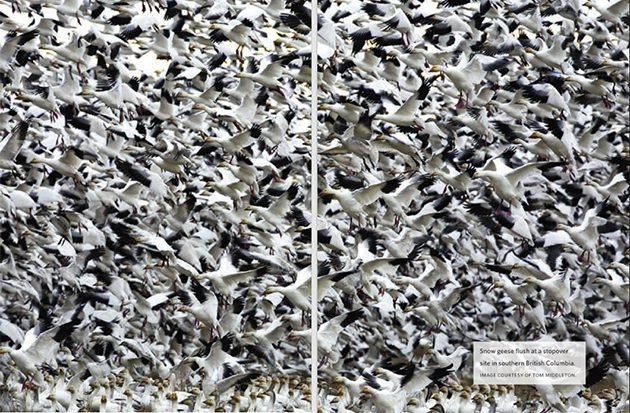 This two-page photograph of Snow Geese is probably used to stunning effect in the paperback edition of At Sea With the Marine Birds of the Raincoast. I couldn’t tell you for sure because I read the Kindle version of the book (at the time I decided to read it, it was not available through my usual online ordering channels, though it is now), and my Kindle does not do color. I’ve been able to find examples of how the photographs look in color in the book on social media, and I’m tempted to order the paperback version as well. These look like beautiful photos by 28 talented nature photographers and researchers, and it also looks like the photographs are placed well within the book.

Conservation issues are woven throughout the narrative, but it is in the final two chapters–“Fall” and “Back to the Coast”–that Fox addresses the issue with anger, frustration, and guarded hope. She’s described conservation successes in detail–the Bald Eagle, the Short-tailed Albatross, now protected in Japan. But, projects like the Enbridge Northern Gateway Pipeline Project, a huge project that was a major reason for the survey project (to collect data proving the environmental  uniqueness of the area), suck up time and energy and money, and even though the project was ultimately killed by the Trudeau administration, there is a long line of other projects, most from the energy industry, threatening the Raincoast. Not surprisingly, a portion of the profits from the sale of the book are going towards conservation.

At Sea With the Marine Birds of the Raincoast is a lovely, intelligent book. The only thing I would have wished Fox had added is a bit more about the people she worked with on the Achiever, and some specifics about her life afterwards. (Professionally, I know from a little Google searching that she is now a Killam Postdoctoral Fellow at at Dalhousie University and the University of Victoria, but I’m nosy enough to want to know what happend to her boyfriend Rob, introduced in chapter 1.) Published by Rocky Mountain Books, a small Canadian publishing company, this is an author and a book that deserves a readership beyond Canadian borders. 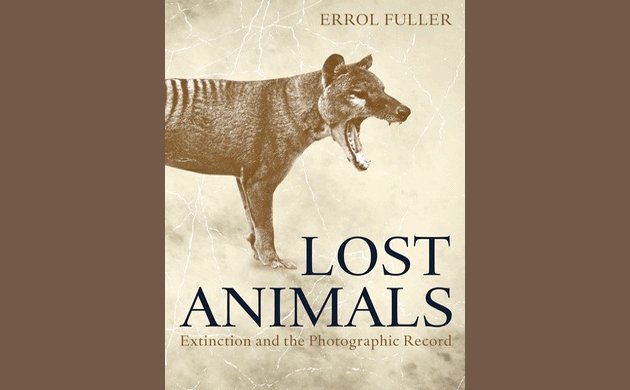 Lost Animals: Extinction and the Photographic Record: A Book Review 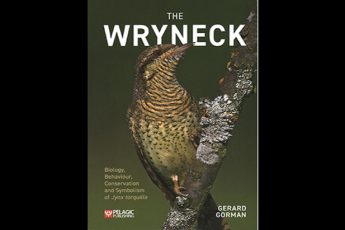 The Wryneck: Biology, Behaviour, Conservation and Symbolism of Jynx torquilla: A Book Review 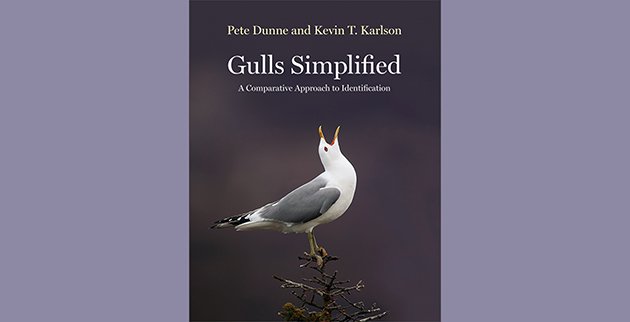