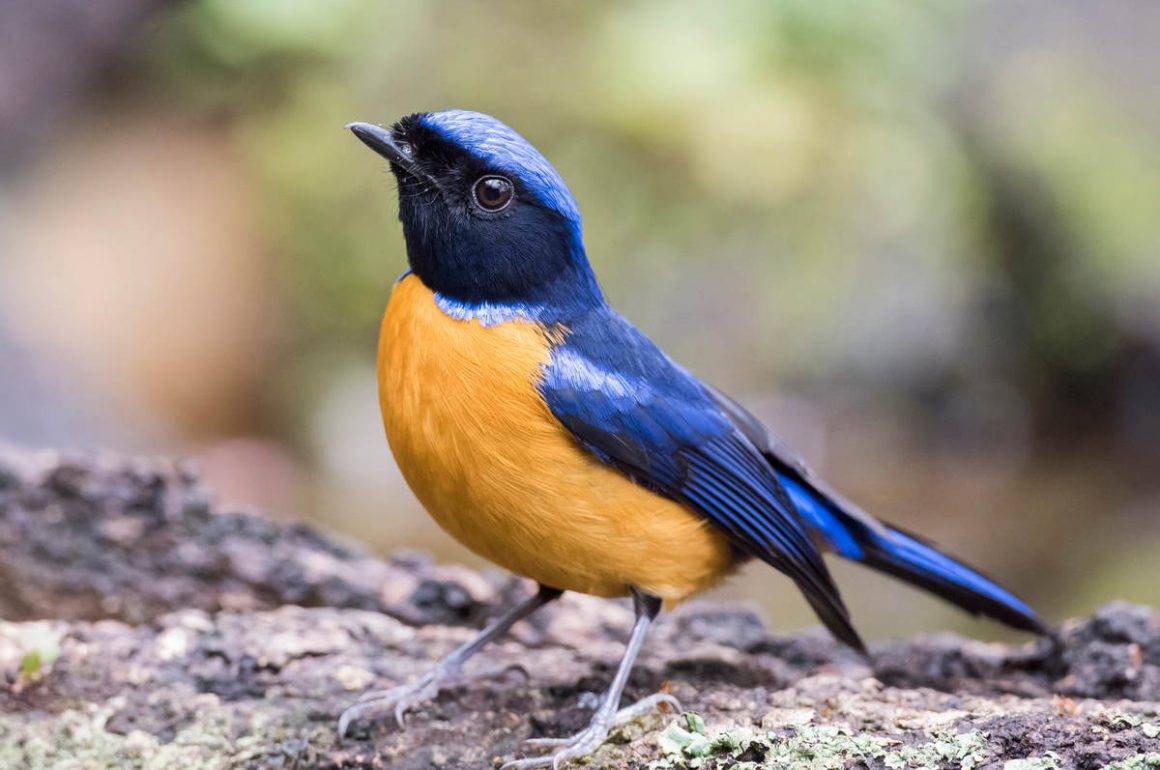 I was looking for a title for this third part of a blog post on the birds of Baihualing, and thought that the made-up term “Trequel” would sound fitting. Imagine my surprise when I (just to be safe) googled trequel and found that the word actually exists and means exactly what one would think it means – the third part of a series. There goes my claim to fame as an inventor of new words.

Baihualing has its share of attractive thrushes. A nice example is the male Black-breasted Thrush. The Latin species name is dissimilis (different, unlike), possibly because the female looks quite different from the male (though based on that explanation, dissimilis would have to be a very common species name).

The male Grey-winged Blackbird is similarly attractive. Somewhat confusingly, its Latin species name is boulboul – a word that stands for nightingale but of course is also the name of a large bird family, the bulbuls.

The Long-tailed Thrush looks quite a bit like – and is related to – the White’s Thrush we have here in Shanghai. The Latin species name dixoni is in honor of the English ornithologist Charles Dixon (1858-1926), even though Charles disqualified himself a bit scientifically by not believing in the role of natural selection in evolution. Consequently, in his later career, he focused more on covering horse shows and agricultural fairs as a journalist (source).

The Blue Whistling Thrush is of course named for its whistling – you can hear it here.

The rock thrush family is more closely related to flycatchers than to thrushes – still, why not show a Chestnut-bellied Rock Thrush here. After all, it is quite beautiful.

I did not know that flavescent means “yellowish or turning yellow” but I had to look it up trying to find something to write about the Flavescent Bulbul. The HBW has a somewhat self-contradictory statement on the relative shyness of this species: “It is a shy and retiring species, but … can be very tame”. So, it is shy unless it is not. Then it is tame.

Apparently, Red-vented Bulbuls are also common in Dubai, not just at Baihualing. Why anybody would want to live in Dubai is a mystery to me though.

Niltava is a genus in the family of Old World Flycatchers (though I still think the term Old World is slightly ridiculous). There are 7 species of them, and according to eBird, you can see 5 of them at Baihualing.

I think all the photos immediately below show Rufous-bellied Niltava. However, it takes a much better birder than me to be sure none of them is a Fujian Niltava.

If there is a Large Niltava …

… there should also be a Small Niltava. No Intermediate Niltava though.

The Grey Bushchat somewhat resents the “grey” part of its name – it makes the species sound bureaucratic and uncharismatic. The bird below wants you to know that it is fun-loving, easy-going, and has a strong sense of humor.

Partridges are the German housewives of the birding world – robust, industrious, and stout. I actually wrote this before looking up the eBird description of the Hill Partridge, only to find that it is in a similar vein (and possibly even less flattering) – the species is stated to have “a body shaped like a football”.

Partridges generally are not great flyers – and humans in their desperate need for explanations (how else to understand the belief in astrology) have come up with one (Wikipedia):

“According to Greek legend, the first partridge appeared when Daedalus threw his nephew, Perdix, off the sacred hill of Athena in a fit of jealous rage. However, Athena saw him falling and saved him by changing him into a bird called after his name, the perdix (partridge). Supposedly mindful of his fall, the bird does not build its nest in the trees, nor take lofty flights and avoids high places.”

(According to another source, the reason for Daedalus’ envy was that Perdix invented the saw after observing the way snakes use their jaws. Hm.)

While the name tailorbird derives from the way these birds construct their nest by sewing together a large leaf, apparently the Mountain Tailorbird does not do that. It is still called tailorbird though.

The eBird description of the Rusty-capped Fulvetta indicates some sympathy for underdogs: “This small brown fulvetta would be drab were it not for its sharp white brow and orange forehead”. Much more drab than the bird: a paper on “The coexistence of seven sympatric fulvettas in Ailao Mountains, Ejia Town, Yunnan Province” (which includes the Rusty-capped Fulvetta).

Finally, two Yuhina species: the Stripe-throated Yuhina (knowingly or unknowingly witty, eBird comments that the “streaked throat is diagnostic but difficult to see”, something well illustrated by the photo) …

… and the Whiskered Yuhina …

… with its nod towards punk rock (eBird: “small songbird with a brown mohawk of a crest”).

Final note: Baihualing is currently closed for all visitors – it is not clear when it will reopen. However, supposedly once it reopens, it will be open to foreigners as well. I hope this will turn out to be true.